How Phillip Goodrum has fit the bill for Memphis’ burgeoning attack 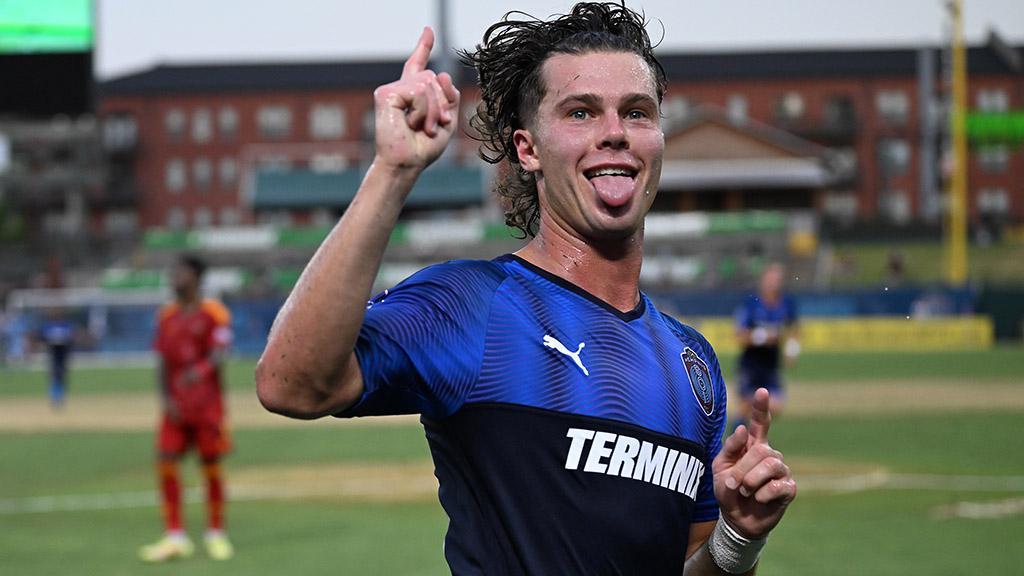 Memphis 901 FC forward Phillip Goodrum notched his 13th goal of the season on Wednesday night, putting him third in the race for the USL Championship Golden Boot in what's been a breakout third professional season. | Photo courtesy Eric Glemser / Memphis

Filling the shoes of Kyle Murphy at Memphis 901 FC could have been a difficult task.

The 2021 USL Championship All-League Second Team selection’s departure after a 20-goal regular season last year to Miami FC last offseason left a major hole in the club’s lineup as it looked to build on its first postseason appearance in its history.

The Tennessee native had shown glimpses of what he could do in limited action for Atlanta United 2 over his first two professional seasons. Last year, while making only five starts, he averaged a goal every 163.3 minutes.

This year, after bagging his 13th goal of the season in 901 FC’s 2-1 victory against the New York Red Bulls II on Wednesday night at MSU Soccer Park, that mark has dropped to 126.5 minutes per goal. Sitting third in the race for the USL Championship’s Golden Boot, Goodrum has been the centerpiece of a Memphis attack that has sent the side to even greater heights in Head Coach Ben Pirmann’s second full season at the helm.

“He’s not the prototypical nine,” said Pirmann on Wednesday night. “He’s not just a poacher. He runs more than anybody, he battles, he contests. He's also very thoughtful with his movements. He frees up his teammates. We wouldn't be in the position where we are today, having the best season in club history, without him doing what he does.”

Memphis certainly could have taken a more comfortable victory against the Red Bulls II, whose late goal by Jordan Adebayo-Smith provided an intriguing finish to an entertaining contest the visitors were able to see out. A combination of some good saves by New York goalkeeper Giannis Nikopolidis and some missed opportunities saw 901 FC leave chances on the table, something it won’t be able to afford when its likely second trip to the playoffs arrives in October.

On Saturday night as the side hosts Hartford Athletic at AutoZone Park, it will need to do so without Goodrum, too. The 25-year-old’s eighth yellow card of the season will see him sidelined, serving a one-game suspension for caution accumulation.

“I thought we reversed the ball well and we got it behind so many times,” said Pirmann of his side’s overall display. “We needed to finish off more chances. In the last two matches we’ve just missed way too many clear-cut [chances]. We've got to be a little bit more efficient. That stuff happens in football, we just have to be a little more cognizant of it.”

But as Memphis takes aim at its first home playoff game in club history – and first playoff victory after falling in the Eastern Conference Quarterfinals on the road last season – Goodrum appears ready to deliver.