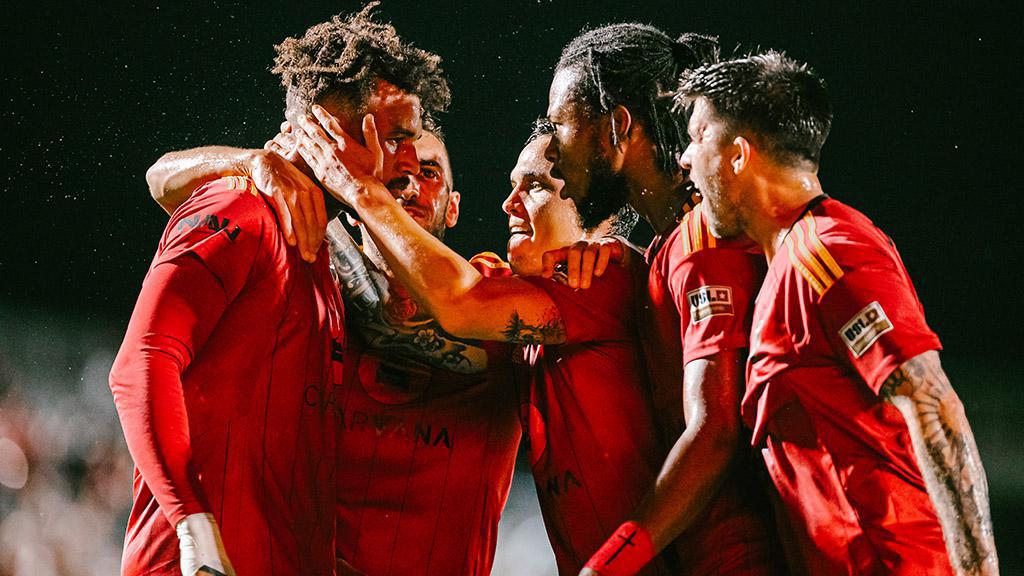 If you wanted a signifier as to whether Phoenix Rising FC was back – returning to the confident, title-contending club we’ve come to know over the past five seasons – it was maybe embodied in a moment that, depending on who you ask, could have been the opening goal of the game.

After 11 minutes against Colorado Springs Switchbacks FC on Saturday night at Wild Horse Pass, center back Joe Farrell picked up inside the Switchbacks’ half and – spotting goalkeeper Jeff Caldwell eight yards off his line – produced an audacious chipped effort from 40 yards.

Officially, Caldwell recovered in time, palming the ball on the line before giving it an insurance prod as both the fans behind the net and players appealed for a goal to be awarded.

The effort itself, however, was a sign of a team that had regained its confidence, maybe just in time.

Eight minutes later, Aodhan Quinn too went for the highlight-reel, and this time it connected. The standout playmaker’s Olimpico from a corner kick on the right beat Caldwell all ends up and found the far corner of the net, opening the scoring in what would prove to be a 4-0 romp that saw the third-placed visitors once again depart the desert empty-handed.

“I was talking with our goalkeeper coach, Corey Robertson before the game,” said Quinn. “We decided I should just start whipping them in and I hit that one well. The first couple I took, I saw the goalkeeper really wasn’t moving. I knew if I put it near him, we had a good chance.”

For Rising FC Head Coach Rick Schantz, who has been the target of fans’ ire during the longest winless streak since the club’s rebranding before the 2017 season, the goal and the aftermath were a source of much-needed relief.

“When Aodhan scored, he came to me and said, ‘we got you coach,’” said Schantz. “That made me feel really good.”

Another thing to feel good about? How about the almost seamless introduction of center forward JJ Williams into the lineup after his arrival earlier this week from FC Tulsa. Williams’ first goal in Phoenix’s colors was beautifully taken, using his frame to turn off his marker while receiving an accurate pass into feet from Kevon Lambert before striking home the second goal of the night precisely into the left corner.

“I couldn’t have dreamed for a better first night,” said Williams. “It’s not just getting a goal. It was our performance as a whole. This performance shows the caliber of team I’m coming into. I’m thankful for that. These guys have been doing this all season, playing well, they just needed the final product.”

Add another set piece delivery by Quinn in the second half that gave Farrell a goal on a flicked header off a free kick from the right, and it felt like old times again.

“Tonight was a fantastic performance,” said Schantz. “We knew what we were getting with JJ [Williams]. We needed a target nine. We needed a guy with good, soft feet that can get in the box and finish.”

Phoenix is still very far from being out of the woods. At the same time, Rising FC has been aided by the stagnant form of the other teams around it in the Western Conference – next Saturday’s home game against Las Vegas Lights FC offers a chance to move potentially within one point of the playoff positions – and has seemingly figured some things out defensively. Saturday marked Ben Lundt’s fourth consecutive shutout and only once in that span, against Louisville City FC in the USL Summer Showcase on July 20, has the side allowed an Expected Goals Against mark above 1.00xGA.

After a display that showed a marked confidence and identity the side lacked during its struggles, the road back to the postseason might have begun on Saturday night.