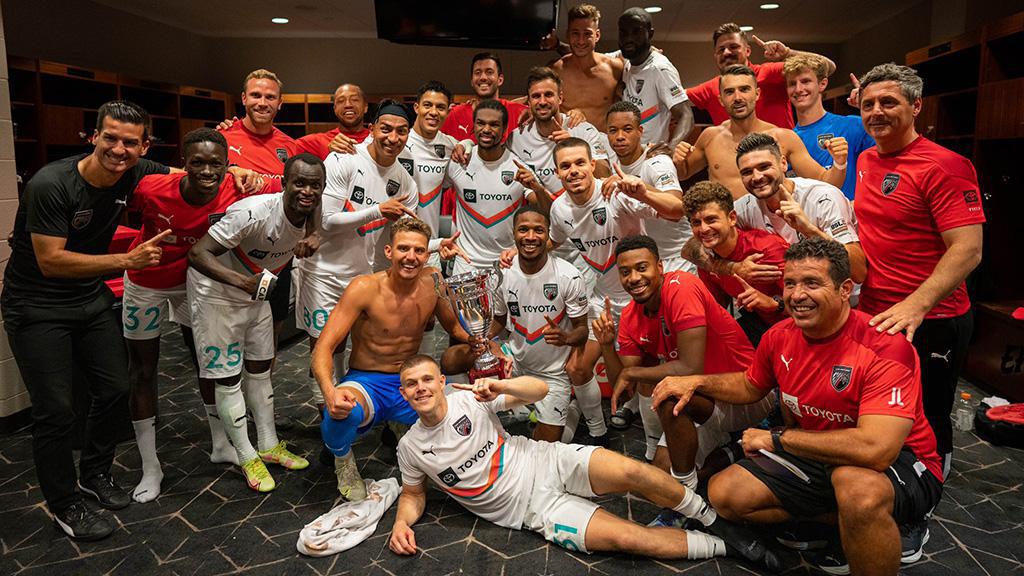 There may be bigger prizes at stake for San Antonio FC when this USL Championship season draws closer to its conclusion.

On Saturday night, however, after the club had earned its first silverware – lifting the Copa Tejas after defeating defending champion El Paso Locomotive FC 1-0 at Southwest University Park – it became a special moment for the team and its travelling support to celebrate.

“Incredibly proud of the team, to win the club’s first trophy,” said SAFC Head Coach Alen Marcina. “That will be an experience that our guys will remember.”

San Antonio had to battle for its victory, which moved it clear of both Locomotive FC and Rio Grande Valley FC in the three-way rivalry’s standings after remaining perfect against its Lone Star State counterparts this season with three wins from three. Samuel Adeniran twice hit the crossbar, as did Fabien Garcia with a whipped free kick late in the first half, before the opening goal arrived.

That it was Santiago Patiño that delivered should come as little surprise. The Colombian’s fourth goal in the past three games came as San Antonio got through a disjoined El Paso defense trying to recover after Adeniran’s shot on a counterattack rattled the crossbar less than 30 seconds prior, with Patiño remaining behind Justin Dhillon to remain onside as he latched onto the volleyed layoff before shooting low into the net.

“I’m feeling good,” said Patiño after his fifth goal of the season. “I’m always preparing, always having the mentality to score and help the team, working hard and [avoiding] complacency. I want more and more, hungry for more.”

Perfect now in 13 games when scoring first this season, San Antonio’s defense then did the rest, with some aid from profligate El Paso finishing. Jordan Farr made an impressive stop to keep out Dylan Mares in the 54th minute on a long-range effort, but that proved the only save required to earn his eighth shutout of the season as Mares missed the target with Locomotive FC’s best chance of the game four minutes later, heading wide of the left post after a cross from the right by Christiano Francois.

The visitors also blocked four other efforts as El Paso recorded the last five shots of the game, bending but unwilling to break as they have so often this season.

“That’s a championship performance tonight,” said Dhillon. “There was a trophy on the line, it’s not easy to come here, they had a long unbeaten streak at home. For us to come out and play the way we did, with so much grit, so much energy, so much fight, and to come out with three points I think shows that this group is something special. We talk about the mentality all the time and it showed once again tonight.”

Congratulations to @SanAntonioFC - the 2022 Copa Tejas Champions who are bringing home the 1st trophy in the club’s history. pic.twitter.com/MTRhKgfYQs

San Antonio has now matched its longest winning streak in club history, set early in the 2017 season. With 15 wins from 19 games, it could challenge the marks set by FC Cincinnati in 2018 and Phoenix Rising FC in 2019 for the most points in a regular season.

Currently rated title favorites at 27 percent odds by fivethirtyeight.com, with a 47 percent chance to be the Western Conference’s representative in the Championship Final in November, San Antonio keeps finding ways to win its most difficult battles.

In winning its first trophy, Marcina’s side may have delivered a breakthrough that can carry it further when the stakes are even higher.

“This is a special trophy because it’s created by the fans,” said Marcina. “It’s why we play the game, we play it for the fans. It’s exciting to earn the three points, and also to get to bring the cup home with us.”