TAMPA, Fla. – The USL Championship announced the Team of the Week for Week 19 of the 2022 regular season on Tuesday, with Las Vegas Lights FC goalkeeper Abraham Romero voted the Championship Player of the Week presented by Konami eFootball after recording an eight-save shutout in his side’s 1-0 victory on the road against Rio Grande Valley FC on Sunday night.

The 24-year-old has been one of two primary starters for Lights FC this season after an offseason move from Orange County SC, and against the Toros produced his third shutout of the season in impressive style. Romero’s eight saves were the most recorded in a shutout so far this season as Lights FC withstood a barrage of chances by the Toros while being outshot 25-3 to claim victory despite Morten Björshol’s goal serving as the side’s lone shot on target for the game.

Romero earned 47 percent of the ballot to claim the award. Louisville City FC’s Brian Ownby finished second on 29 percent after recording both goals in his side’s comeback victory against Memphis 901 FC on Saturday night that gave Louisville its fifth consecutive victory and marked the veteran forward’s second consecutive two-goal outing. 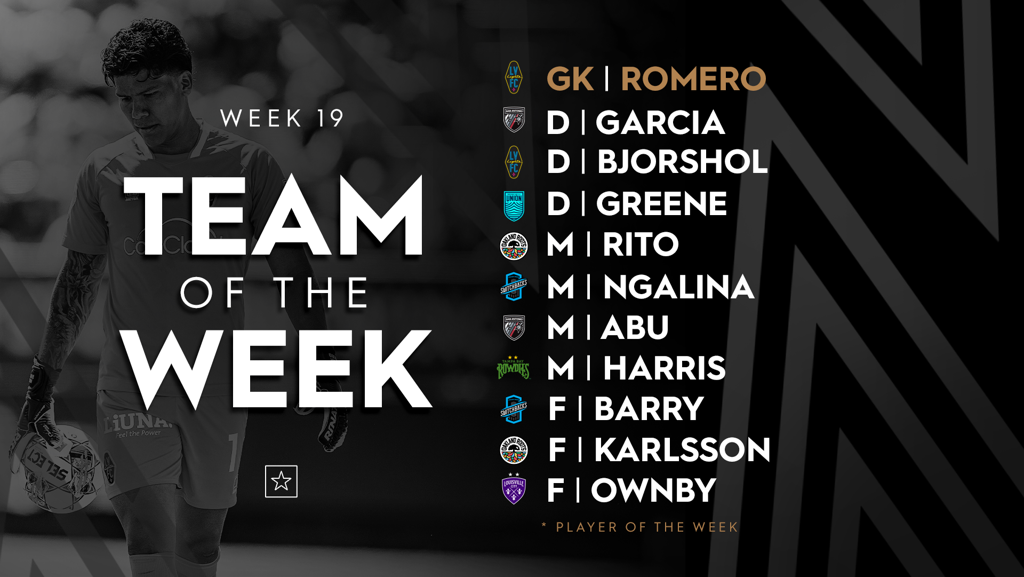 GK – Abraham Romero, Las Vegas Lights FC: Romero recorded an eight-save shutout to lead Lights FC to a 1-0 victory on the road against Rio Grande Valley FC on Sunday night in a game in which Las Vegas recorded only one shot on target.

D – Fabien Garcia, San Antonio FC: The French center back had a strong two-way performance, recording six chances created and completing 3 of 3 dribbles while winning 10 of 16 duels and 3 of 4 tackles and recording 12 recoveries defensively in SAFC’s 5-0 win against Atlanta United 2.

D – Morten Björshol, Las Vegas Lights FC: The Norwegian full back scored the only goal of the game as Lights FC took a 1-0 victory on the road at Rio Grande Valley FC with a 30-yard thunderbolt and recorded seven clearances and four interceptions while completing 22 of 29 passes overall.

D – Kai Greene, Monterey Bay F.C.: Greene helped Monterey Bay record a second consecutive shutout in a 0-0 draw with Detroit City FC as he recorded nine clearances, won 5 of 7 duels and 3 of 4 tackles and made nine recoveries at Cardinale Stadium.

M – Michee Ngalina, Colorado Springs Switchbacks FC: Ngalina recorded a goal and assist, completed 4 of 4 dribbles and 24 of 26 passes, and won 13 of 15 duels and 2 of 3 tackles defensively as the Switchbacks took a 4-2 victory against the LA Galaxy II at Weidner Field.

M – Dayonn Harris, Tampa Bay Rowdies: Harris came on as a halftime substitute and ignited the Rowdies’ attack with a pair of assists on four chances created in the side’s 4-1 victory against Loudoun United FC, while also completing 15 of 17 passes and 3 of 3 dribbles and winning 2 of 2 tackles.

F – Ottar Magnus Karlsson, Oakland Roots SC: The Icelandic forward scored twice as Oakland produced its highest-scoring half since joining the Championship in a 4-0 win against El Paso Locomotive FC on Saturday, and finished the night with four shots and two chances created at Laney Stadium.

F – Brian Ownby, Louisville City FC: Ownby celebrated his 32nd birthday with a second consecutive two-goal performance as LouCity rallied for a 2-1 victory against Memphis 901 FC in a top-two clash in the Eastern Conference, while also winning 2 of 2 tackles and recording four shots overall.