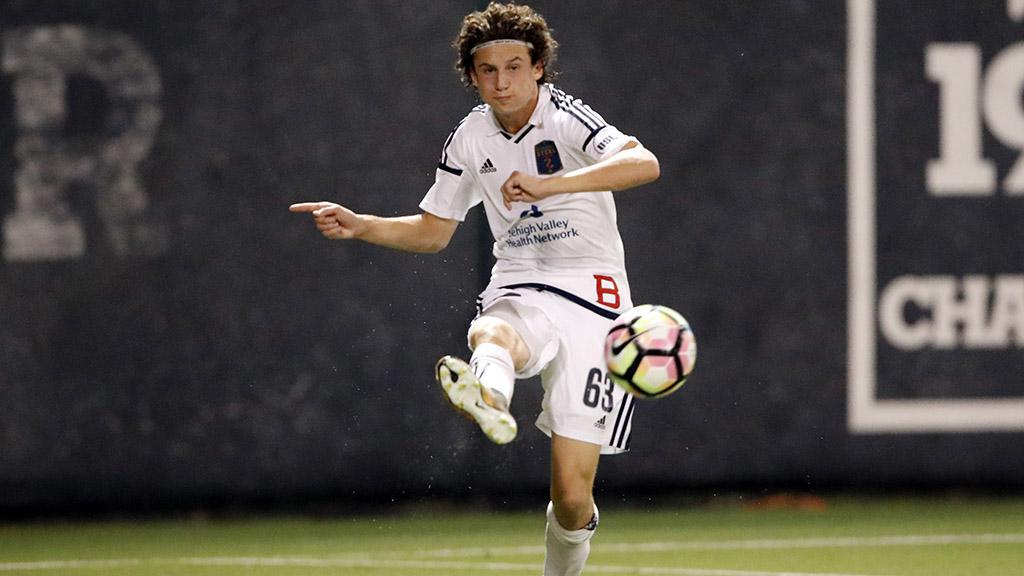 New Leeds United FC signing Brenden Aaronson helped Bethlehem Steel FC reach the USL Championship Playoffs in both 2017 and 2018 at the start of a career that has now brought him to the Premier League. | Photo courtesy Matt May / Tampa Bay Rowdies

For Colorado Springs Switchbacks FC Head Coach Brendan Burke, there was never a question that former protégé and current United States international Brenden Aaronson was on a pathway to success from an early age.

“He’s one of those special people that when you’re around them, even when they’re young, you know they’re going to succeed in a big way, you just don’t know exactly how,” Burke told the Yorkshire Evening Post’s Stuart Rayner recently. “[Current Philadelphia Union Head Coach] Jim Curtin and I were first-team assistants but working in the academy when he was an eight- or nine-year-old kid so we’ve been around Brenden for a long, long time.

“He ended up playing for me in the USL Championship. I believed he debuted as a 16-year-old or maybe just shy of it, and we knew we had something special.”

Five years after Aaronson made his professional debut in the USL Championship for Bethlehem Steel FC on July 15, 2017, the 21-year-old is now preparing for his first season in the Premier League after an offseason move to Leeds United FC, one of the most historic clubs in England, after a successful stint at Austrian champions Red Bull Salzburg.

For those that have followed the USL’s growth over the past decade at both the Championship and League One level, Aaronson’s pathway is a familiar one. After honing his craft in the same way as USMNT contemporaries like Tyler Adams, who will join Aaronson at Leeds this season, and Ricardo Pepi – both title winners in their time in the USL Championship and League One, respectively – the time came to make the next move, and eventually land in one of Europe’s Big Five leagues.

Tyler Adams, Brenden Aaronson, Matt Turner, Ricardo Pepi, Jonathan Gomez and Kobi Henry are among the players who came through the USL Championship and League One early in their professional careers who are now at the top of the club game in Europe.

Of the players that represented the United States Men’s National Team across its successful World Cup Qualifying campaign that earned a place in the 2022 FIFA World Cup in Qatar this November, 16 had previously played in the USL Championship, League One or League Two. From early-emerging talent like Adams, Aaronson and Pepi, to the likes of Aaron Long or recent Arsenal signing Matt Turner, who took longer to mature into the players they have become, the USL ecosystem has provided a player development platform that has formed the foundation for the recurring success of the U.S. Youth National Team programs and now the senior team.

Thanks to the burgeoning USL Academy League and overall program, those pathways are now extending more broadly across the United States. Since January, five players from the USL Championship have been transferred to top-flight clubs in Europe, including last year’s USL Championship Young Player of the Year Jonathan Gomez from Louisville City FC to La Liga’s Real Sociedad. More recently, United States U-20 international and USMNT prospect Kobi Henry made the move from reigning Championship title holders Orange County SC to Ligue 1 club Stade de Reims for a USL-record transfer fee.

Moves are also arriving more regularly at the domestic level. This year has seen the transfer of 2020 Championship Young Player of the Year finalist Hayden Sargis from Sacramento Republic FC to Major League Soccer’s D.C. United, and this past month the transfer of 2021 Championship All-League selection and current United States U-20 international Diego Luna for the highest domestic transfer fee between USL and MLS clubs as he joined Real Salt Lake from El Paso Locomotive FC.

The plans and pathways that are being built by clubs to find avenues for players to achieve their goals of top-flight European soccer are now common, with Henry’s move to Stade de Reims a great example.

“With Kobi’s transfer into Stade de Reims, what that has done for the league and for us as a club, now a lot of players are looking at the USL [Championship] as a development [path] because it’s very clear,” said Orange County SC President of Soccer Operations and General Manager Oliver Wyss. “We control the player’s rights, 100 percent, we can sell the player as soon as he’s ready to be sold. I think every team in the USL has the opportunity to learn that you can develop players while still competing for championships, and you don’t have to do one without the other.”

With more young talent now emerging in the USL Championship and League One – including 17-year-old Louisville City FC center back and United States U-19 international Joshua Wynder – and the infrastructure that is being built with the guidance of USL Sporting Director Mark Cartwright and Technical Director Liam O’Connell, more stories like Aaronson, Gomez and Henry could soon arrive.