TAMPA, Fla. – The USL Championship announced the Team of the Week for Week 18 of the 2022 regular season on Tuesday, with Louisville City FC forward Enoch Mushagalusa voted the Championship Player of the Week presented by Konami eFootball after bagging the first hat trick of his professional career in LouCity’s victory against the New York Red Bulls II on Saturday night.

One of LouCity’s offseason arrivals, Mushagalusa has become a regular in the club’s lineup this season and delivered a career-best performance in a 6-0 victory against the Red Bulls II. Mushagalusa provided the assist on Jorge Gonzalez’s goal in the 23rd minute that gave LouCity a two-goal lead and then reeled off three consecutive goals between the 32nd and 64th minute to bag his first hat trick in the Championship. Mushagalusa became the 14th player in the Championship since 2014 to record at least three goals and one assist in a single game, and the second this season after Atlanta United 2’s Jackson Conway on March 27.

Mushagalusa earned 47 percent of the ballot to claim the award. His LouCity teammate Brian Ownby and Pittsburgh Riverhounds SC’s Jelani Peters finished tied for second on 20 percent, with Ownby bagging two goals and two assists against the Red Bulls II and Peters recording the first two-goal game of his career while putting in a strong defensive display in the Hounds’ 4-1 victory against Miami FC on Saturday night. 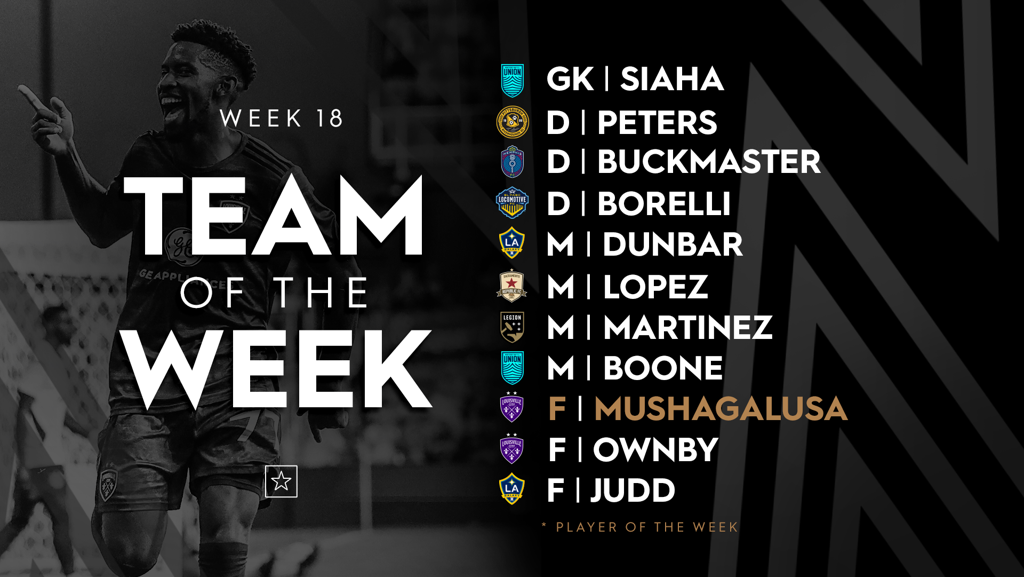 GK – Anthony Siaha, Monterey Bay F.C.: Siaha recorded a shutout on his professional debut for Monterey Bay, registering two saves as the side claimed a 2-0 victory on the road against defending title holder Orange County SC.

D – Jelani Peters, Pittsburgh Riverhounds SC: Peters recorded the first two-goal game of his career in the Championship in Pittsburgh’s 4-1 victory against Miami FC on Saturday night and the center back also won 7 of 9 duels, 5 of 5 aerial duels and made one interception.

D – Rece Buckmaster, Memphis 901 FC: Buckmaster scored once and won 8 of 13 duels and 3 of 4 tackles defensively while completing 39 of 52 passes in Memphis’ 3-1 victory against Phoenix Rising FC on Saturday night.

D – Eder Borelli, El Paso Locomotive FC: Borelli notched his second assist of the season as El Paso claimed a 1-0 victory against Colorado Springs Switchbacks FC and won 4 of 5 duels and 3 of 4 tackles while recording three chances created and completing 23 of 32 passes overall.

M – Cameron Dunbar, LA Galaxy II: Dunbar recorded two goals and one assist as the LA Galaxy II claimed a 5-0 victory on the road against San Diego Loyal SC while ending the game with three shots, three chances created and having completed 17 of 19 passes.

M – Enzo Martinez, Birmingham Legion FC: Martinez reached 50 regular season goals for his career on Saturday night as Legion FC defeated the Charleston Battery and had two goals and one assist over two appearances during the week.

M – Chase Boone, Monterey Bay F.C.: Boone scored the opening goal in MBFC’s 2-0 victory on the road against Orange County SC and had three shots and one chance created overall while winning 10 of 14 duels, 4 of 4 aerial duels, and 2 of 2 tackles defensively.

F – Brian Ownby, Louisville City FC: Ownby posted the first two goal, two assist game of his career – the 13th player to do so in the Championship’s history – and had eight shots and five chances created in LouCity’s 6-0 win against the New York Red Bulls II.

F – Preston Judd, LA Galaxy II: Judd recorded two goals and one assist to move into double-digit goals for a second consecutive season, and had five shots and two chances created as Los Dos claimed a third consecutive victory in a 5-0 win on the road against San Diego Loyal SC.