ST. PETERSBURG, Fla. – Of the starters for the Tampa Bay Rowdies on Saturday night, forward Jake LaCava had the second-fewest touches of the ball with only 20 points of possession over his 76 minutes of action.

It was a perfect example of less is more.

The young forward’s pair of goals in the opening 20 minutes sent the Rowdies to a 2-0 victory against Memphis 901 FC before an enthusiastic crowd of 6,175 fans at Al Lang Stadium that added to the three-team race that is now setting up at the top of the USL Championship’s Eastern Conference after Louisville City FC’s victory later in the night against Birmingham Legion FC.

Set up on the left side of the Rowdies’ attacking trio centered by Kyle Greig, the 21-year-old was twice in the right place at the right time to finish strong attacking moves initiated on the right side. After delivering a in a similar fashion on Tampa Bay’s demolition of Pittsburgh Riverhounds SC the weekend prior off the right wing, the continued focus on shape and position paid off handsomely as LaCava moved to a team-high nine goals this season. 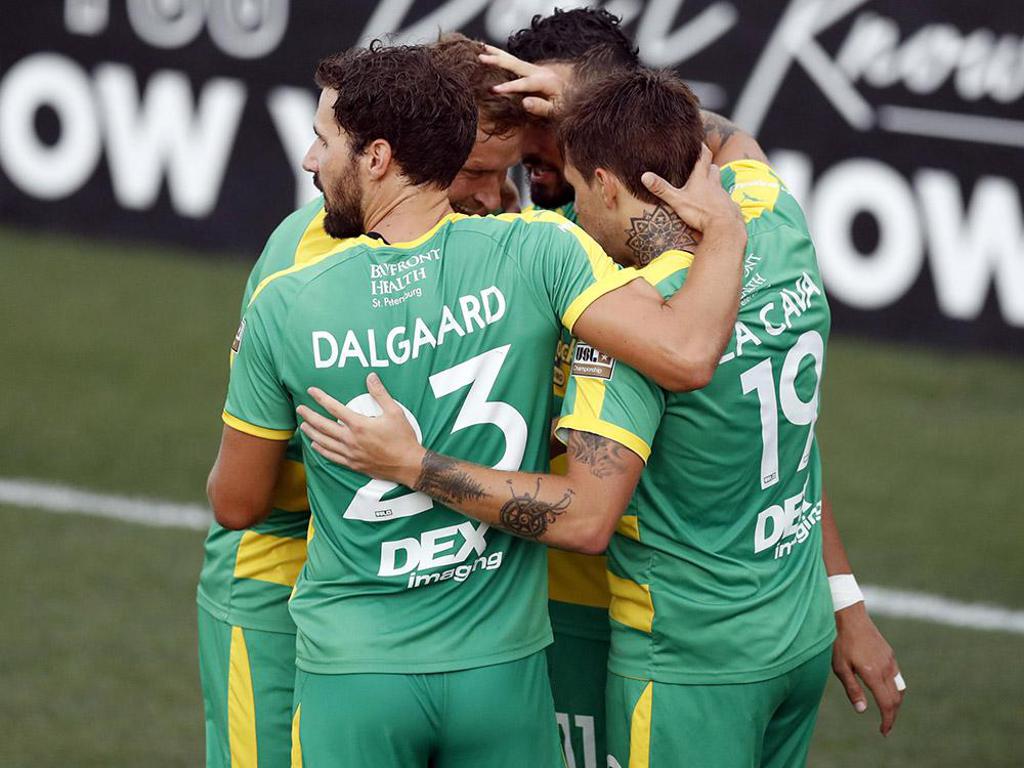 “All week, the emphasis has been on the wingers getting in good positions to finish off plays,” said LaCava. “So as Kyle was driving, I just thought, ‘do the work now, get into that good position.’ As the ball fell there, I didn’t really think about it. I just knew I was going to hit it one time. I’ve scored a lot near post this season, you know. It seems to be my sweet spot, and I thought I’d tuck it in there.”

LaCava’s nose for goal has been evident since his arrival with the Rowdies on a season-long loan from the New York Red Bulls. Building on his 11 goals over the past two seasons in the Championship with the Red Bulls II, the New Milford, Connecticut native’s progression has seen him both succeed as a central forward in the Rowdies’ lineup earlier in the season, while now quickly adapting to a wider role with the experienced Greig serving as the target forward in the center.

The success LaCava has achieved arriving at a veteran-laden squad aiming to not only retain the Eastern Conference title for a third consecutive season but claim the USL Championship title for the first time since joining the league in 2017 has been centered around not only his ability, but a mentality that has been right at home with his new teammates.

“I think Jake's mentality has been fantastic,” said Rowdies Head Coach Neill Collins. “On top of that, he’s a great player. He’s very coachable, which means then that we hopefully can make him better if we give them the right things. I think he's doing a lot of the right things.”

LaCava’s nine goals currently place him tied for fourth in the USL Championship’s Golden Boot race this season, three off the league-led held by Orange County SC’s Milan Iloski, but the most among players eligible for the league’s Young Player of the Year award at the end of the campaign. With the instincts he’s shown so far and the Rowdies surging up the Eastern Conference on an eight-game undefeated run, the pathway to success both now and in the future appears to be broadening.

“I think the biggest thing for him is he’s got nine goals,” said Collins. “He’ll feel there are more goals there for him, there are more things for him to improve, but I’ve just been so pleased by his attitude towards buying in. I think the players have seen that, so they’re behind him. There’s no surprise he’s having success.”