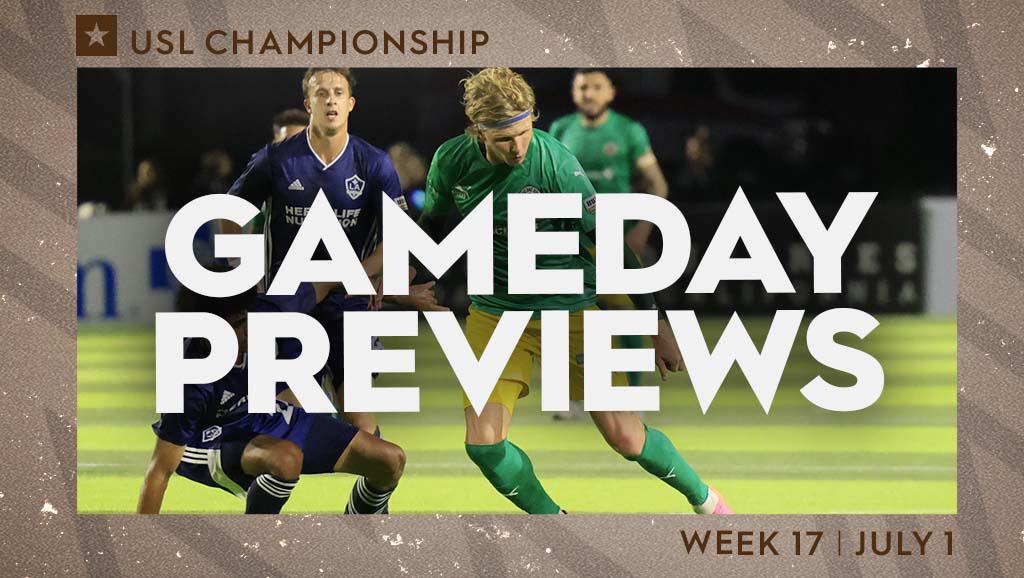 A contest between two of the top five teams in the Western Conference highlights Friday night’s action in Week 17 of the 2022 USL Championship season, with Pittsburgh Riverhounds SC also in need of a bounce-back performance on the road before a nightcap with playoff implications in California wraps up the night.

The Lowdown: Pittsburgh Riverhounds SC will try to break a three-game losing streak as it heads to face a New York Red Bulls II side that has struggled for form over the course of the season so far. The Hounds suffered a 5-2 defeat to the Tampa Bay Rowdies last Saturday night to suffer their first three-game losing run in the Championship since Head Coach Bob Lilley was appointed prior to the 2018 season. Alex Dixon notched an early assist as Arturo Osuna scored his first goal in the professional ranks, moving Dixon to 30 regular season assists for his career and into a tie for the league-lead with six this season, but the Rowdies then took off in attack to become only the second visiting team to score five goals at Highmark Stadium in its history. The Hounds have held the upper hand on the Red Bulls II since Lilley’s appointment, however, posting a 9-2-0 record over the past four seasons, and New York may provide the antidote to Pittsburgh’s recent struggles as it sits with only one win and six points from 16 outings after a 5-0 defeat at El Paso Locomotive FC. The contest was notable for young Red Bulls II and United States U-15 international Nathan Worth, who became the youngest player to appear in the Championship this season and 11th-youngest all-time as he made his debut aged 15 years, 119 days old, but the hosts will need to find another gear if they’re to continue the Hounds’ recent downturn.

Spotlight Players
New York Red Bulls II – Jordan Adebayo-Smith: The English forward has scored three goals this season and will be hoping to break a four-game scoreless streak against a Hounds side he has one goal in three games against previously.

Pittsburgh Riverhounds SC – Kenardo Forbes: The veteran playmaker had one of his poorest outings of the season against Tampa Bay and will be aiming to rebound and claim the 50th regular season assist of his career in the Championship.

The Lowdown: Colorado Springs Switchbacks FC will try to rebound from its first two-game losing streak of the season as it plays host to a Sacramento Republic FC side that has won five games in a row in all competitions as it arrives at Weidner Field. The Switchbacks fell 2-0 to Hartford Athletic on Tuesday night to drop four points behind San Antonio FC at the top of the Western Conference standings as Hadji Barry hit the crossbar and Hartford goalkeeper Yannik Oettl had a two-save shutout, resulting in only the second instance in which the side had been held scoreless in consecutive games during Head Coach Brendan Burke’s tenure. Colorado Springs rotated its lineup heavily for the game in Connecticut as it tries to navigate a tough stretch of four games in 11 days that culminates on Monday night at home to San Diego Loyal SC, which could see regular starters such as Malik Johnson and Elvis Amoh return after being used as substitutes on Tuesday night. Sacramento, meanwhile, will be aiming to build on its best run of form of the season after Maalique Foster scored twice to lead a comeback victory against Monterey Bay F.C. last Saturday night at Cardinale Stadium. Republic FC has won four in a row in the league and five in a row overall including its Lamar Hunt U.S. Open Cup Quarterfinal result against the LA Galaxy on June 21 and would move within two points of the Switchbacks if it can continue a four-game winning streak in the series as the teams meet for the first time since 2019 on Friday night.

Spotlight Players
Colorado Springs Switchbacks FC – Hadji Barry: The reigning Championship MVP is tied for the league’s assists lead with six helpers and has also notched six goals and will look to push his team forward against a strong Sacramento defense.

Sacramento Republic FC – Matt LaGrassa: The central midfielder has been a commanding presence in the center of the park this season and his matchup against an attacking Switchbacks group could be key to earning another positive result on the road.

The Lowdown: The LA Galaxy II and Oakland Roots SC both have the chance to move above the playoff line in the Western Conference as they each look to build on victories last time out in their second meeting of the season. Oakland claimed a 3-1 victory against Atlanta United 2 last Saturday night as Ottar Magnus Karlsson scored his league-leading 11th goal of the season from the penalty spot to deliver the game-winner before Johnny Rodriguez scored a late insurance goal for the hosts at Laney Stadium. The win broke a three-game winless streak for Roots SC, which took a 1-0 win against Los Dos on its home turf when the teams last met on May 21 as Karlsson again converted from the spot. The Icelandic forward has converted five of six penalties so far this season, while accounting for 37.9 percent of Oakland’s goals this campaign. Los Dos sits three goals behind Oakland in the scoring chart with 26 goals this campaign, but is also coming off a victory on Saturday night as it handed Miami FC a 3-1 defeat at Riccardo Silva Stadium for its second away win of the campaign. Owen Lambe notched a pair of assists as the Galaxy II grabbed an early lead it wouldn’t relinquish in South Florida. The side has been more dangerous at home, however, with five wins in eight outings so far this season including victories against Louisville City FC and Phoenix Rising FC. Led by Preston Judd, who recorded his 25th regular-season goal in the Championship against Miami, the hosts have postseason aspirations of their own as Oakland comes to visit.

Spotlight Players
LA Galaxy II – Josh Drack: The left back had a strong two-way performance in Miami that was highlighted by an outstanding early free kick finish, a display he’ll be aiming to build on against a good Oakland squad.

Oakland Roots SC – Memo Diaz: The right-sided player notched his first assist of the season last Saturday night against Atlanta while putting in his best performance of the season so far, and could be dangerous once again.