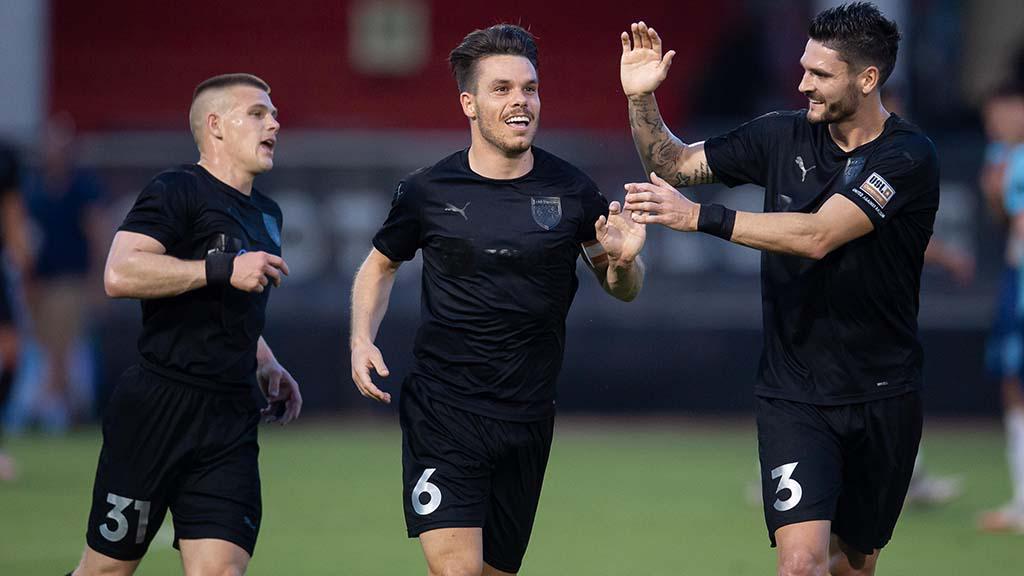 Upon reaching the midway point of the 2022 USL Championship regular season at the conclusion of Week 16 this past Saturday, San Antonio FC is – according to the predictive modeling on fivethirtyeight.com – the favorite to claim the Championship Final in November.

If that were to happen – the odds currently sit at 22% – Head Coach Alen Marcina’s side would be a title winner unlike any we’ve seen previously over the past five seasons in the Championship’s history.

Here’s a graph. It represents the combined passing accuracy percentage (vertical) and average possession percentage (horizontal) for the 10 teams that advanced to the USL Championship Final since the league partnered with Opta before the 2017 season, and San Antonio this season.

You can pick out which is SAFC, can’t you? 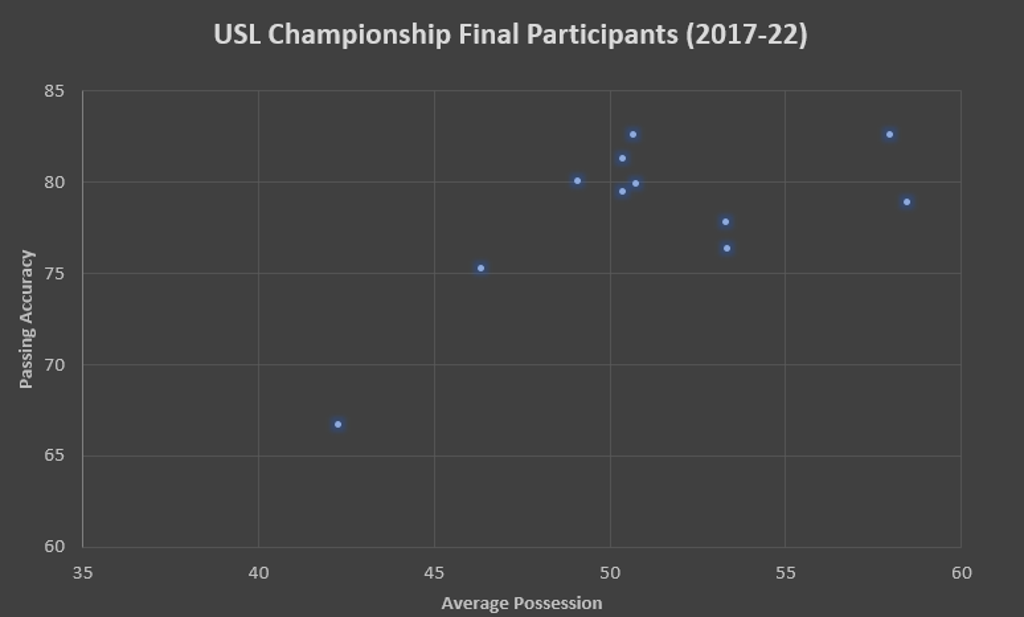 The only team that comes close to the combination that San Antonio currently delivers is the 2018 Western Conference title winning Phoenix Rising FC side that featured Didier Drogba, Solomon Asante and others, but fell 1-0 to Louisville City FC in the Championship Final. That season, Phoenix averaged 46.35 percent possession and 75.23 percent passing accuracy. While that’s somewhat of an outlier, it still leaves it with more in common with the LouCity side it fell against thanks to Luke Spencer's winner, or last year’s Orange County SC side, which became the only Championship Final winner to have sat with a average of less than 50 percent possession during its regular season campaign at 49.11 percent.

San Antonio is currently on course to have the second-lowest possession average of any team in the Championship since the start of 2017, with only Ottawa Fury FC having sported a lower mark at 40.28 percent possession in 2018. On the other axis, SAFC has dropped below that Fury squad – and every other recorded team in league history – with its passing accuracy rate, which stands almost two percent lower than Las Vegas Lights FC’s inaugural 2018 squad at 68.45 percent.

Now, does this matter? Maybe, maybe not.

In terms of a playing style, it’s clearly working effectively. San Antonio’s direct and physical play under Marcina has made them extremely difficult to play against – just ask Colorado Springs Switchbacks FC, which was knocked out of first place in the West as San Antonio took a 1-0 win at Weidner Field last Friday night. SAFC has found the right balance this year in terms of keeping opponents from playing their game, sitting 10th in the league in fouls committed, fourth in yellow cards, but having received only two red cards so far this season after seeing red seven times a season ago.

Additionally, the direct play has not only created consistent chances for SAFC – the side currently plays on average 37.9 percent of its passes per game into or in the attacking third, and averages 5.2 shots on target per game – but it has helped pin opponents back – San Antonio ranks fifth in the league with 96 instances of winning possession in the final third of the field.

The main question is whether this type of plan can be successful in the postseason? Last year, it almost was. San Antonio was eliminated by Orange County SC after a penalty shootout in the Western Conference Final of the USL Championship Playoffs. At the same time, there’s reason to ask whether lightning can strike twice with this style. Nine of San Antonio’s 11 wins this regular season have come by a single goal, and American Soccer Analysis’ data model shows SAFC is outperforming its Expected Points mark by 12 going into Tuesday night’s nationally televised clash with FC Tulsa (9 p.m. ET | ESPN2).

No matter what, though, Marcina, his midfield talisman PC, and the rest of San Antonio’s squad are bought in and ready to work.

If they succeed, it will be a title run unlike any we’ve seen before.