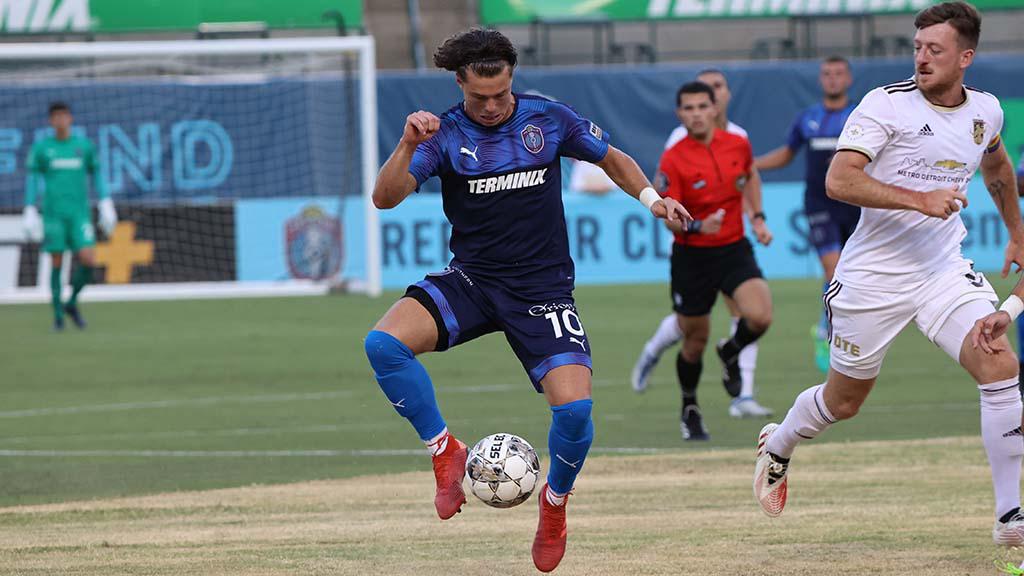 Featuring two of the top four teams in the Eastern Conference standings, and the intrigue of Memphis 901 FC Head Coach Ben Pirmann facing the club at which he achieved legendary status for the second time this season, Saturday night’s contest between 901 FC and Detroit City FC was arguably the most eye-catching of the day’s slate.

By the end of the night, the growing divide between the top three and the chasing pack could hardly have been clearer.

Coming off short rest, 901 FC’s 2-0 victory against Le Rouge at AutoZone Park saw the hosts regain top spot in the Eastern Conference, briefly claimed by Louisville City FC earlier in the day. It also cemented Memphis’ position as one of the teams to beat in the league this season.

“I don’t know the exact stats, but we had a lot of chances and good moments,” said Pirmann. “We pressed high in the first half. The second half, as they went more aggressive, we picked our moments. One thing we wanted to do better than we did against Tulsa was when we keep it in the final third and had a dozen chances. We played great and I'm proud of these boys, they put it on the line.”

All that, while at the same time rolling out the same lineup that not 72 hours earlier had earned the same result – and the same score line – against FC Tulsa. In these days of squad rotation, this was a throwback, in part forced by injuries such as the one that has influential midfielder Laurent Kissiedou sidelined, but also dictated by Pirmann’s belief in his lineup.

That belief was rewarded by another sterling display which carried a secondary thread from Wednesday night. When Aaron Molloy delivered a beautiful free kick from the right flank into the penalty area seven minutes before halftime, Graham Smith was there to convert with a good header to the right corner, the second consecutive game in which the duo had combined to deliver a decisive opening goal.

Memphis is now 10-0-1 when scoring first this season, and 6-0-0 when doing so at home. That, as much as anything else, provides a clear insight into why last year’s first-time playoff participant has taken the next step on the road to title contention this season. They rarely offer paths back for opponents.

“It’s a full team effort,” said Smith. “It’s all 11 guys putting in the work. We have a lot of confidence, we can play a lot of different styles. If we have to take pressure for a little bit, we’re comfortable doing that and we took our chance tonight and had a great finish by Phil at the end.”

Memphis’ approach as it sought to maintain its lead against a Detroit side that was the lone team to earn a point this season after 901 FC had taken the lead in a 1-1 draw at Keyworth Stadium in April held the visitors to only three shots after the break, none of which troubled goalkeeper Trey Muse.

After securing consecutive victories in four days, Memphis now faces a July schedule that will see it face the two teams directly chasing it for first place in the standings. A visit to face the Tampa Bay Rowdies next Saturday night is followed by a showdown with LouCity on July 16 on home turf, both of which will provide the biggest tests so far of 901 FC’s credentials.

After Saturday night’s showing, the Eastern Conference leaders look ready for the challenge.

“We said no excuses tonight,” said Pirmann. “You run and you play good football. You play for each other, and you play for this community. That's what we try to do. Obviously, we’ve got a lot of tough matches coming up but that was as tough as it gets. We played great. I’m really excited for our group.”