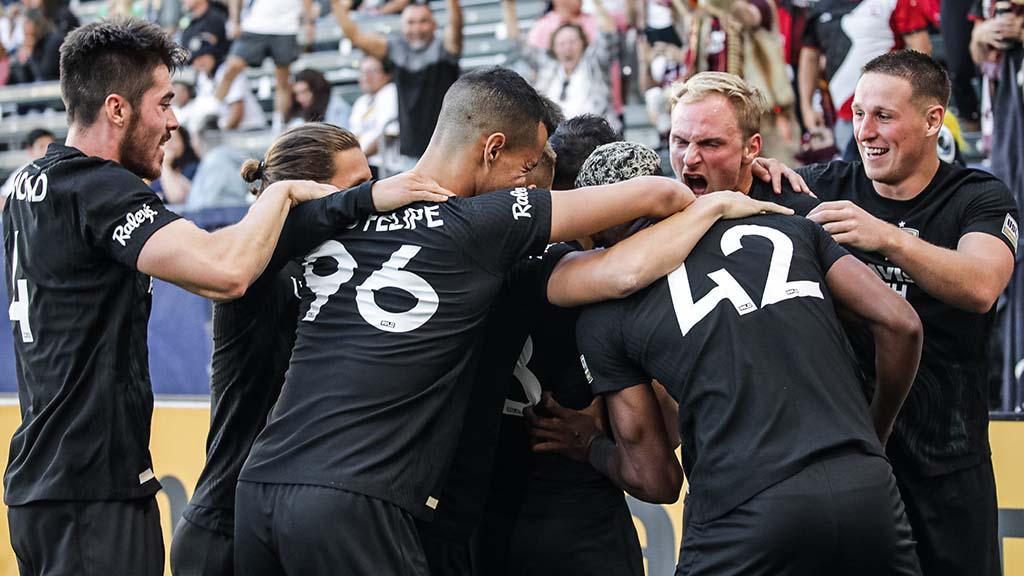 CARSON, Calif. – Luis Felipe Fernandes has been one of the central figures in Sacramento Republic FC’s historic run in the 2022 Lamar Hunt U.S. Open Cup.

On Tuesday night, he scored the biggest goal of his career to date, with a rifled second-half winner sending his side to a 2-1 victory against the LA Galaxy at Dignity Health Sports Park and into the Semifinals for the first time in club history on a remarkable night in Southern California.

Fernandes’ goal was his third game-winner in as many rounds for Republic FC, having struck the opening goal against both Phoenix Rising FC in the Fourth Round and the San Jose Earthquakes in the Round of 16 previously.

With the win, Sacramento becomes the first lower-division side to advance to the Open Cup Semifinals since then-USL Championship club FC Cincinnati in 2017. It will now await the winner between Major League Soccer’s Sporting Kansas City and USL League One club Union Omaha, who meet on Wednesday night.

Aiming for an early break, Sacramento produced a move with the precision required to break down the Galaxy defense in just the fourth minute. A pass from Jack Gurr on the right was flicked into space by Keko up the flank, allowing Douglas Martinez Jr. to break in behind the LA back line. The Honduran international cut back a perfect delivery to find the run of Rodrigo Lopez, whose first-time strike picked out the bottom-right corner past Galaxy goalkeeper Jonathan Klinsmann.

The name of the game for the visitors was always going to be containment, however, as the Galaxy controlled more possession while probing for an opening to respond. A long-range effort by Raheem Edwards forced a good save by Sacramento’s Danny Vitiello in the 18th minute, but off the ensuing corner kick an in-swinging, left-footed delivery by 2018 Championship Young Player of the Year Efrain Alvarez deflected off Republic FC defender Conor Donovan as he battled Derrick Williams at the near post and found the net.

Set pieces proved where the Galaxy were most dangerous before the break, with a flicked header by Dejan Joveljic the closest the hosts went to finding the lead. Sacramento, meanwhile, grew further into the game and began to get spells of possession of its own, one of which delivered a chance late in the first half for Martinez off a cut-back cross by Lopez the Honduran was unable to hit cleanly.

Republic FC almost regained the lead early in the second half off a set piece of its own as Zeiko Lewis’ delivery from the right was flicked on at the near post by Lee Desmond, only for the Irish center back's header to hit the left post. The rebound came to Matt LaGrassa, whose effort to the top-right corner from 12 yards was just deflected over as the Galaxy escaped the scare.

Eventually, the Galaxy’s big guns were going to come out, and after an hour the hosts introduced Chicharito Hernandez, Julian Araujo and Victor Vazquez to challenge Sacramento’s squad. A threaded pass by Daniel Aguirre almost created an opening for Chicharito to strike, but the Mexican international was warded off by the Republic FC defense in the 63rd minute as the hosts continued to carry more possession.

With 20 minutes to go, however, Sacramento stunned its hosts again. Picking up possession in the left channel 30 yards from goal, Fernandes was offered space and gladly took it, driving a low shot to the right corner that just eluded the dive of Klinsmann to put Republic FC back on top.

The attacking onslaught from the Galaxy then began. Sacramento had to withstand numerous deliveries into the penalty area as the hosts forced a sequence of four consecutive corner kicks, LaGrassa finally clearing to provide relief. A free kick by Vazquez from a dangerous position crashed into the wall, with a headed chance off the recycled possession by Rayan Raveloson falling into the hands of Vitiello.

But Republic FC's defense not only held, but Sacramento was able to take the steam out of the game as it drifted into stoppage time. Galaxy passes into the final third went astray, allowing Vitiello to milk every second he could off the clock. When he was called on, the Republic FC goalkeeper came and claimed – adventurously at times, but surehanded.

When the final whistle blew, one final punch clear from Vitiello as the Galaxy threw their last haymaker sealing the moment, the celebrations on the field and in the stands began.