TAMPA, Fla. – The USL Championship announced the Team of the Week for Week 15 of the 2022 regular season on Tuesday, with LA Galaxy II forward Preston Judd voted the Championship Player of the Week presented by Konami eFootball after recording the second hat trick of his career to lead Los Dos to a 3-2 victory against Monterey Bay F.C. last Wednesday night at Dignity Health Sports Park.

Currently in his second professional season, Judd has been the centerpiece of the Galaxy II’s attack over the past two campaigns. The 23-year-old recorded his second hat trick in the Championship against Monterey Bay, notching a pair of goals in the opening 11 minutes of the contest to set Los Dos on the way to victory before adding his third in the 53rd minute, just two minutes after Monterey Bay had halved its halftime deficit. Judd has now scored seven goals this season for the Galaxy II and has 24 goals in 47 regular-season appearances for the club.

Judd earned 59 percent of the ballot to claim the award. Colorado Springs Switchbacks FC winger Michee Ngalina and Loudoun United FC forward Abdellatif Aboukoura finished tied for second on 18 percent after each recording a pair of goals on Saturday night to lead their sides to victory against Indy Eleven and Phoenix Rising FC, respectively. 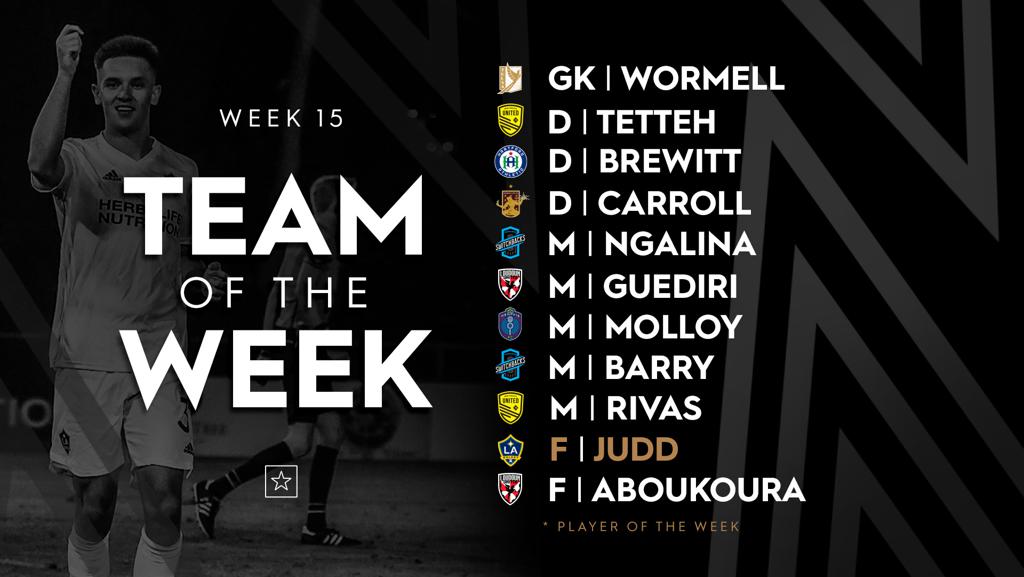 GK – Austin Wormell, FC Tulsa: Wormell recorded his second shutout in three outings for Tulsa with a five-save performance against the New York Red Bulls II that earned the visitors a point in a 0-0 draw at MSU Soccer Park.

D – Tom Brewitt, Hartford Athletic: Brewitt had a result-saving goal line clearance in stoppage time of Hartford’s 1-1 draw with Memphis 901 FC on Wednesday night before recording a goal and assist in the club’s 3-0 victory at Atlanta United 2 on Saturday.

M – Michee Ngalina, Colorado Springs Switchbacks FC: The Congolese winger scored twice on five shots overall, including a candidate for Goal of the Year, in the Switchbacks 4-3 victory against Indy Eleven on Saturday night.

M – Sami Guediri, Loudoun United FC: Guediri recorded one goal on two shots and had two chances created while completing 28 of 38 passes and winning 5 of 7 tackles in Loudoun’s 4-3 victory against Phoenix Rising FC on Saturday night.

M – Aaron Molloy, Memphis 901 FC: Molloy put in a strong two-way performance as Memphis rallied for a 1-1 draw against Hartford Athletic on Wednesday night, recording five chances created and completing 55 of 64 passes while winning 3 of 3 tackles and 8 of 13 duels and making five interceptions.

M – Sergio Rivas, New Mexico United: Rivas played a key two-way role in New Mexico’s 2-1 win at Oakland Roots SC, recording one assist and two chances created, completing 5 of 6 dribbles and 27 of 33 passes, and winning 13 of 17 duels and 3 of 3 tackles as United won its fifth game in a row.

F – Preston Judd, LA Galaxy II: The Nevada native recorded the second hat trick of his career in the Championship to lead Los Dos to a 3-2 victory against Monterey Bay F.C. on Wednesday night.