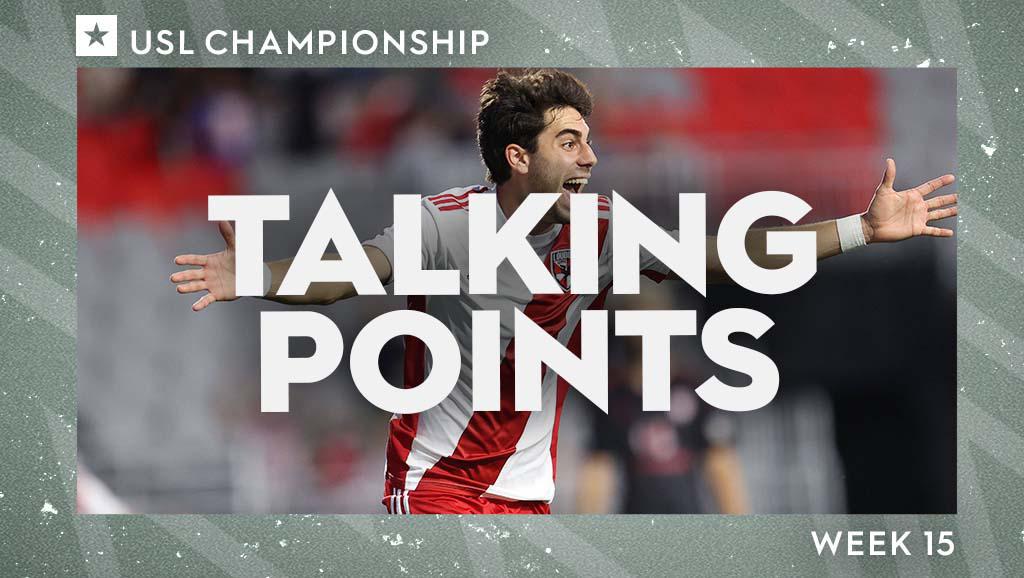 Loudoun United FC's victory against Phoenix Rising FC paid off the promise the side has shown, and left Phoenix in a very unfamiliar position in the West. | Photo courtesy Loudoun United FC

There were both eye-catching performances and surprises over the past weekend in the USL Championship, all of which added up to a compelling set of games as the playoff races continued to take shape in both conferences.

Here are 10 things we took away from the action.

1. Loudoun Puts it all together against Phoenix

Over the past two seasons, there have regularly been outings for Loudoun United FC where the side has delivered everything but the goals it needed to succeed. In fact, dating back to the start of the 2021 season, Loudoun’s Expected Goals mark of 72.7xG ranks eighth in the league, ahead of clubs like San Diego Loyal SC, El Paso Locomotive FC, and Pittsburgh Riverhounds SC.

On Saturday night, that scoring potential became reality. Led by 17-year-old Abdellatif Aboukoura’s pair of goals, Loudoun scored a 4-3 victory against Phoenix Rising FC in one of the results of the season so far and providing a potential turning point as the side nears the midway point of the campaign.

“I am incredibly proud of the guys to fight back after going a goal down,” said Loudoun Head Coach Ryan Martin. “The resiliency to score four against a team like Phoenix is tremendous. Different guys stepping up in some many different ways. I’m very proud of their effort and their focus this week. It was one of those where we feel like we’ve been getting better, but it was like, ‘OK, when are you going to step up or not?’ That was the conversation all week. The time is now, and we really have no other time.”

What Loudoun must do now is find that level consistently. The side has yet to string together consecutive wins since the opening two games of this season, with its last outing prior to Saturday – a 2-0 defeat at Atlanta United 2 – a step back after a good victory three days prior. With seven points to make up to the Eastern Conference playoff positions, there’s still time. And after Saturday, there should also be renewed hope.

On the flip side, Phoenix now finds itself in very unfamiliar territory. The last time the side lost three regular season games in a row? You have to go back to the start of the Rising FC era for that, with the loss to Toronto FC II that opened the 2017 season coming after a pair of defeats to close the 2016 season before an offseason transformation that build Phoenix into the power it has become.

The struggles the side has faced defensively – now conceding 19 goals in the past six games – have pushed Rising FC to a coin-flip to make the playoffs at all after five consecutive trips. The playoff race is still tight, but there’s got to be some kind of response after another night in which the back line was pierced consistently.

“The guys that I put on the field deserved to start,” said Rising FC Head Coach Rick Schantz after Saturday’s loss. “I need to put the players on the field that did show some quality tonight.”

3. Orange County worn down in Louisville

As poorly as things are going right now for Phoenix, defending title-holder Orange County SC is sitting in a very difficult situation after its 3-1 loss to Louisville City FC on Saturday night. Conceding pair of late penalty kicks on the road, Orange County wore down after a stellar overall effort to limit their hosts at Lynn Family Stadium, but couldn’t quite see it through, nor have goalkeeper Patrick Rakovsky pull off the heroics he became known for last postseason.

Orange County’s four-game losing streak is the side’s longest in the regular season since the 2014 campaign, when it finished in its current position of second-last in the then single-table league standings. As with Phoenix, there’s still time, but with an eight-point gap to make up to the top seven, time is now of the essence if OCSC is to defend its crown in the postseason.

There was correct criticism by USL on ESPN analyst Devon Kerr of El Paso Locomotive FC goalkeeper Evan Newton’s role in Detroit City FC’s opening goal on Saturday in the spotlight game that for the first time aired nationally on ESPN. By the end of the day at Keyworth Stadium, though, Newton had more than made up for it with a pair of key late saves to deny DCFC’s Antoine Hoppenot and Francis Atuahene to earn a 1-1 draw and keep El Paso’s current undefeated run alive.

Newton’s turnaround in form since a disastrous start to the season has shown why beyond longevity he’s become the Championship’s all-time leader in shutouts and saves. Since April 30, Newton’s Goals minus Expected Goals mark is a league-best -4.70, almost one full goal ahead of FC Tulsa’s Austin Wormell and his hot start after being introduced as starter this month. That’s been a difference-maker for Locomotive FC as it continues its progression up the Western Conference.

There are some strong attacking partnerships in the USL Championship this season, but the one that’s been developed by Danny Trejo and Cal Jennings for Las Vegas Lights FC might be the one on which a side’s playoff chances hinge the most. Each player scored for a second consecutive outing on Sunday afternoon to rally Lights FC to a 2-1 win against San Diego Loyal SC at Torero Stadium, continuing to show why they’re among the best in the league.

Trejo now sits with eight goals in 14 appearances this season, while Jennings has five in 10 contests. No-one else has more than one goal for Lights FC this season, leaving the dynamic duo with 13 of the side’s 20 goals overall this season, or 65 percent. That might not work for every club. As good as Trejo and Jennings are, it could work here.

6. Zach Zandi coming into his own for Switchbacks

There is plenty of star-power in Colorado Springs Switchbacks FC’s squad. From 2021 Championship MVP Hadji Barry, who is following that campaign up with another great year, to showstopper Michee Ngalina, who delivered another incredible moment in Saturday’s 4-3 win against Indy Eleven, there’s a lot that catches the eye.

The player that might be most underrated, though, is midfielder Zach Zandi, who produced his own highlight-reel moment on Saturday night and continues to deliver week-in and week-out for his side.

“Someone asked the other day about giving one word to describe Zach [Zandi] and I said complete,” said Switchbacks Head Coach Brendan Burke, who brought the former Philadelphia Union Academy product in when he joined Colorado Springs last year. “Just as complete as any player I’ve ever worked with – he’s intelligent, he’s technical, he has a mobility, and he reads the play well. There’s no hole in his game."

If there was any indicator of the focus Sacramento Republic FC was placing on Tuesday night’s Quarterfinal in the Lamar Hunt U.S. Open Cup against the LA Galaxy, you only needed to look at the club’s lineup against the Galaxy II for their Championship regular season game on Saturday.

The rotation that saw goalkeeper Danny Vitiello, midfielders Damia Viader, Luis Felipe Fernandes and forwards Douglas Martinez Jr. and Keko start the game on the bench was part of seven changes to the lineup from the side’s 2-0 win at Detroit City FC the prior weekend, the most the side had made game-to-game this season. And yet, from Head Coach Mark Briggs’ perspective, that wasn’t going to be an excuse for a below-par performance.

“It's a squad game, right?” said Briggs. “We knew with the roster we put together that we were going to have to rotate in certain games and everyone was going to play their part. Tonight was one of those games where everyone got to play their part. And to be fair to the guys, they took their opportunity, and we walk away with three points.”

Chalk up one of those nights for San Antonio FC on Saturday, as it slipped a couple of points back of Colorado Springs Switchbacks FC after a 1-1 draw at home to Oakland Roots SC despite having the better of the game and the chances throughout.

San Antonio could have been sharper in its finishing, it’s true. That still might not have been enough to get past Oakland’s Paul Blanchette, who delivered an individual season-high six saves in the draw, keeping Roots SC right in the middle of the Western Conference playoff race.

9. Toros get hometown hero against Hounds

As elsewhere in the USL Championship, there’s a youth movement going on at Rio Grande Valley FC as the club looks to bring up the talent from its Academy program after the changes made to its affiliation agreement with Houston Dynamo FC before last season. On Saturday night, though, it was one of the older local products that made the difference for the Toros.

McAllen, Texas native and former University of Texas Rio Grande Valley standout Javier Garcia notched a shutout in just his second professional start to earn RGVFC a 1-0 win against Pittsburgh Riverhounds SC, giving the 24-year-old a night to remember for not only himself but the people who helped him to this moment.

“I know that a lot of my family members always wanted to see me play professionally,” said Garcia. “I had signed professionally but, the only thing left now was to play. Seeing them here and seeing them be very excited watching me play on field obviously motivated me. I want to keep making them proud.”

The Charleston Battery felt like they had turned a corner in Week 14’s victory against Pittsburgh Riverhounds SC. Backing that up with a 1-1 draw against the Tampa Bay Rowdies on Saturday night thanks to a beautifully constructed goal finished by Augustine Williams for his sixth tally of the season added to that belief as the side battled well with the two-time defending Eastern Conference title holder.

“To come in here against one of the best teams in the league and earn a point, it's an amazing feeling because of how much we were grinding,” said Williams. “It's a big step forward and it was excellent collective work.”

The Battery have still got an uphill climb to get back into playoff contention as they approach the halfway point of the season. Even if that doesn’t happen this year, though, they could prove a real spoiler for other teams vying for the postseason down the stretch.