TAMPA, Fla. – The USL Championship announced the Team of the Week for Week 14 of the 2022 regular season on Tuesday, with Atlanta United 2 midfielder Raimar voted the Championship Player of the Week presented by Konami eFootball after recording a two-goal outing to lead his side to a 2-0 victory against Loudoun United FC on Saturday night at Fifth Third Bank Stadium, earning Atlanta its first victory in more than two months.

An offseason arrival, the Brazilian has made a positive impact on Atlanta’s attacking play since his debut at the start of May. This past Saturday, 20-year-old opened the scoring from the penalty spot for the hosts after playing part in the build-up before Andrew Sullins was brought down in the penalty area. Raimar then put the game away for the side in second-half stoppage time, breaking forward on a counterattack on the left and delivering a precise low shot to the right corner to seal Atlanta’s first win since April 2.

Raimar earned 47 percent of the ballot to claim the award. San Antonio FC’s PC finished second on 27 percent after an impressive midfield display that saw him record a pair of assists in SAFC’s 3-2 victory on the road against Monterey Bay F.C. at Cardinale Stadium on Saturday afternoon. 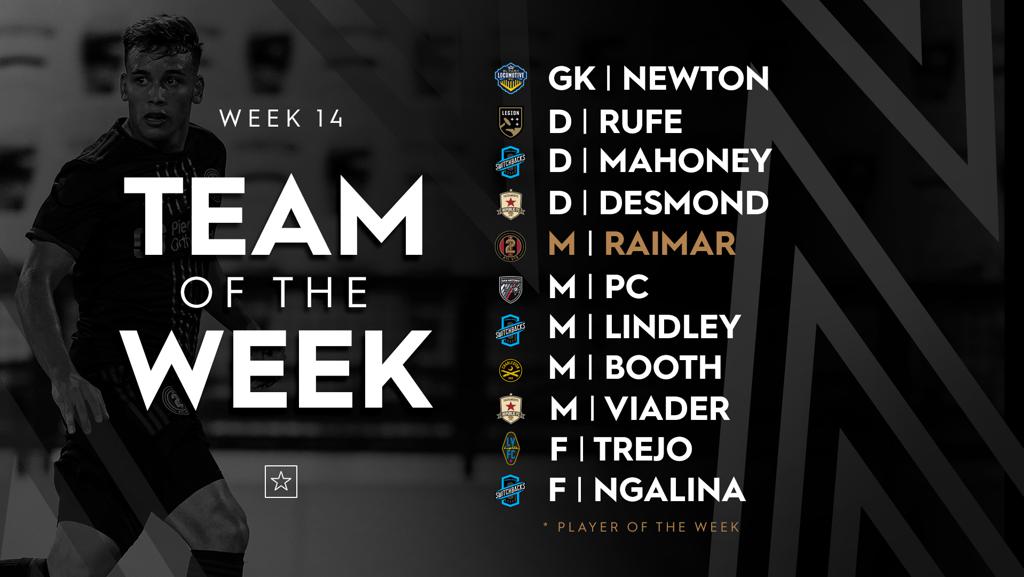 D – Lee Desmond, Sacramento Republic FC: The Irish center back put in a strong shift as Republic FC handed Detroit City FC its first home loss of the season, winning 10 of 16 duels and 8 of 10 aerial duels while making five interceptions and seven recoveries.

M – Raimar, Atlanta United 2: The Brazilian recorded both goals as Atlanta took its first win since April with a 2-0 victory against Loudoun United FC, scoring on both of his shots while completing 3 of 4 dribbles and making seven recoveries.

M – Cam Lindley, Colorado Springs Switchbacks FC: Lindley scored the final goal in the Switchbacks’ 3-1 victory on the road at the LA Galaxy II and had three chances created, completed 50 of 62 passes and won 3 of 3 duels and 2 of 2 tackles defensively.

M – Andrew Booth, Charleston Battery: Booth played a key role in the Battery’s first win since opening night against Pittsburgh Riverhounds SC on Saturday, scoring once and recording three chances created while completing 28 of 33 passes overall and winning 9 of 16 duels.

F – Danny Trejo, Las Vegas Lights FC: Trejo scored his seventh goal of the season to lead Las Vegas to a 3-0 victory against Orange County SC, and recorded two shots, one chance created and completed 19 of 25 passes overall in a solid return to form.