There were no two ways about it. As good as Sacramento Republic FC had been at home so far this campaign, their performances on the road had not lived up to the same standard.

When it came to changing that, there was no place better to start than in the side’s defensive play.

After delivering the club’s best defensive display of the season at home the weekend prior on Expected Goals Conceded, stifling Western Conference contender San Antonio FC in a 2-0 victory at Heart Health Park while allowing a mark of only 0.32xGA, Head Coach Mark Briggs’ side took that same mentality on the road on Saturday night against Detroit City FC at Keyworth Stadium.

The result? A second consecutive 2-0 win that saw Sacramento deliver its best road defensive display of the campaign, giving a Le Rouge side that had previously been undefeated on its home turf little to work with in the attacking third on the way to a 0.41xGA mark for the game.

“You talk about the defense,” said Briggs. “To be honest all 11 players have to do the defending. For me all over the field, every player did the defensive responsibilities and they also showed courage and composure to get on the ball and keep the ball which I was really proud of them for. Just a fantastic performance defensively and attacking.”

The formula was similar to the win against San Antonio, too. Republic FC kept Detroit from finding many chances between the edges of the six-yard area as center backs Lee Desmond, Connor Donovan and Dan Casey patrolled the defensive third confidently, while the visitors also picked off passes in midfield to quickly turn defense into attack. Republic FC’s opening goal by Damia Viader provided an ideal example. The Spaniard’s interception of a loose pass 40 yards from goal provided the 2021 USL League One Defender of the Year the opportunity to step into ample space ahead of him.

When DCFC’s failed to step to Viader, he took advantage, firing a precise strike from 30 yards into the bottom-right corner of the net to stake Republic FC to a 10th-minute lead.

“I saw nobody was stepping to me,” said Viader. “So, I kept driving in, driving forward and I just took a shot. They gave me a lot of space. And luckily, I struck it very well and it went in.” 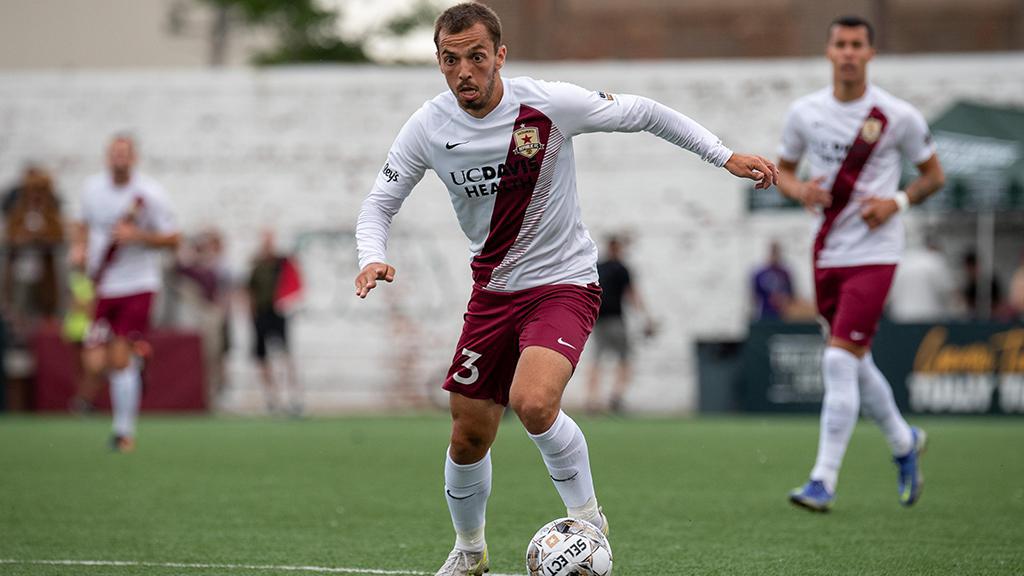 Another midfield interception, this time by Desmond, almost saw Sacramento double its lead six minutes later as a sharp passing move set up Rodrigo Lopez for a curling shot from the top-left edge of the penalty area that rang the right post with Detroit goalkeeper Nathan Steinwascher likely beaten. When Keko finished off another move begun by a midfield turnover – this time caused by Dan Casey as he stepped into win possession – with 11 minutes gone in the second half, there was no way back for the hosts before a crowd of more than 7,000 fans.

Sacramento has now claimed consecutive victories for the first time since the opening two games of the season, and consecutive shutouts for the second time as well. Sitting in sixth place in the Western Conference standings – in large part because of its prior road difficulties – the remaining schedule this month that sees the side host the LA Galaxy II and visit Monterey Bay F.C. before a key July 1 clash with conference leader Colorado Springs Switchbacks FC is a major opportunity to solidify Republic FC’s place in the conference’s pecking order.

“I thought we were absolutely fantastic from the first minute to the 94th minute,” said Briggs. “I thought we controlled the game in a very hostile environment, in a very hard place to come and play. We controlled the tempo of the game and were fantastic. Every person that stepped on the field from even the people that didn't step on the field, the support on the sidelines, but just the performance overall, was phenomenal.”