It had to be him.

As one of the few remaining members from Birmingham Legion FC’s original squad in 2019, Anderson Asiedu has been in the middle of the Southern Harm derby against Memphis 901 FC since its inception, building his status as a cult hero among the Magic City Brigade and others who follow the club.

With a 90th-minute game-winner against the Eastern Conference-leading 901 FC – his first goal in the series, and just his third for the Three Sparks in the league for his career – the diminutive Ghanaian added to that legend, delivering the late drama we’ve come to expect in one of the league’s best rivalries. 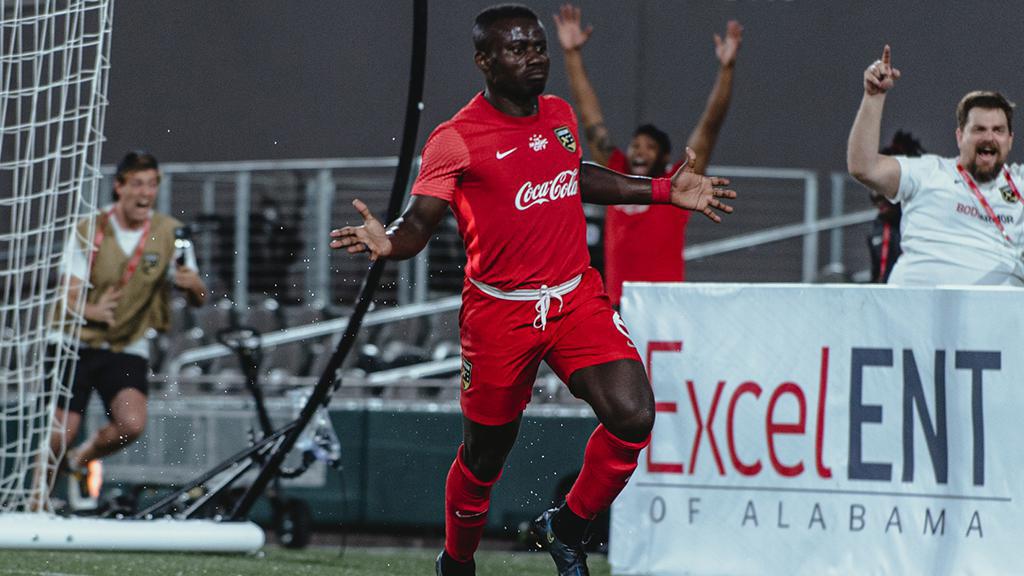 For most of what proved a long night – an almost-two-hour lightning delay saw the game end at almost 11 p.m. locally at Protective Stadium – it didn’t seem as though a decisive moment might arrive. Legion FC went closest to opening the scoring in the first half when Phanuel Kavita’s header bounced agonizingly off the right post off a set piece before Zachary Herivaux was unable to put away the rebound.

Other chances arrived for the hosts but went by the wayside, while Memphis also threatened as leading scorer Phillip Goodrum was unable to convert on a pair of chances inside the final 15 minutes.

But then, out of almost nothing, Asiedu’s moment arrived. With the game ticking into the final minute, Alex Crognale’s hopeful long free kick from his own half was flicked on by Enzo Martinez, and Ryan James stole in front of his defender to keep the chance alive. His touch fell perfectly for Asiedu, whose first-time blast from the right side of the penalty area ripped home at the near post, sending the local fans still on hand four hours after kickoff into wild celebrations.

The goal placed Asiedu alongside the likes of former Legion FC heroes Daniel Johnson, whose 90th-minute goal earned Birmingham its first win in the series in 2019, Chandler Hoffman, who equalized in second-half stoppage time from the penalty spot when the teams first met more than three years ago, and Neco Brett, whose penalty kick in the eighth minute of stoppage time grabbed a 2-2 draw in 2020.

It also earned another important victory for the side, moving Birmingham into the playoff positions in the Eastern Conference. Picking up a third consecutive win, Legion FC is showing signs of finding the form which has earned a postseason berth each of its first three seasons.

“Last couple of games we were on the road and did fantastic, and now we’re in front of our home fans again, but had the weather and everything, but we’re sticking together,” said Asiedu. “We’re loving everybody, and we’re giving our best every day. That’s the atmosphere right now, love and positivity. Feels amazing to be out here with this group of guys and enjoying life, man.”

“Build the Statue” tweeted the Magic City Brigade after the game.

After another memorable derby night, who could possibly disagree.