As a free agent this offseason, when Jeremy Kelly first discussed a potential move to Memphis 901 FC with Head Coach Ben Pirmann, he pitched himself as something different to the defensive player most had grown accustomed to seeing him as in college and the professional ranks.

Three months into the USL Championship campaign – with four goals and a league-leading six assists to his credit for the current Eastern Conference leader – that sales job has paid off handsomely so far for both the club and the player.

“It’s been years since I’ve played this far forward,” said Kelly this week. “I was happy to play anywhere. I just wanted to be on the pitch. But I knew I had it in me and I knew I had grown up playing as an attacking midfielder and winger. I knew that was a big part of my game. I could dribble and I could finish, I can create opportunities in the final third. I'm a bit surprised it’s come around so quickly, but I knew I had it in me.”

Kelly’s three goals and three assists across a perfect four-game winning streak saw him on Thursday voted the USL Championship’s Player of the Month for May, adding to Pirmann’s honor as Coach of the Month on Wednesday. For Pirmann, the qualities Kelly has brought to 901 FC have proven invaluable to a side continuing its upward ascent in the USL Championship’s ranks this season. 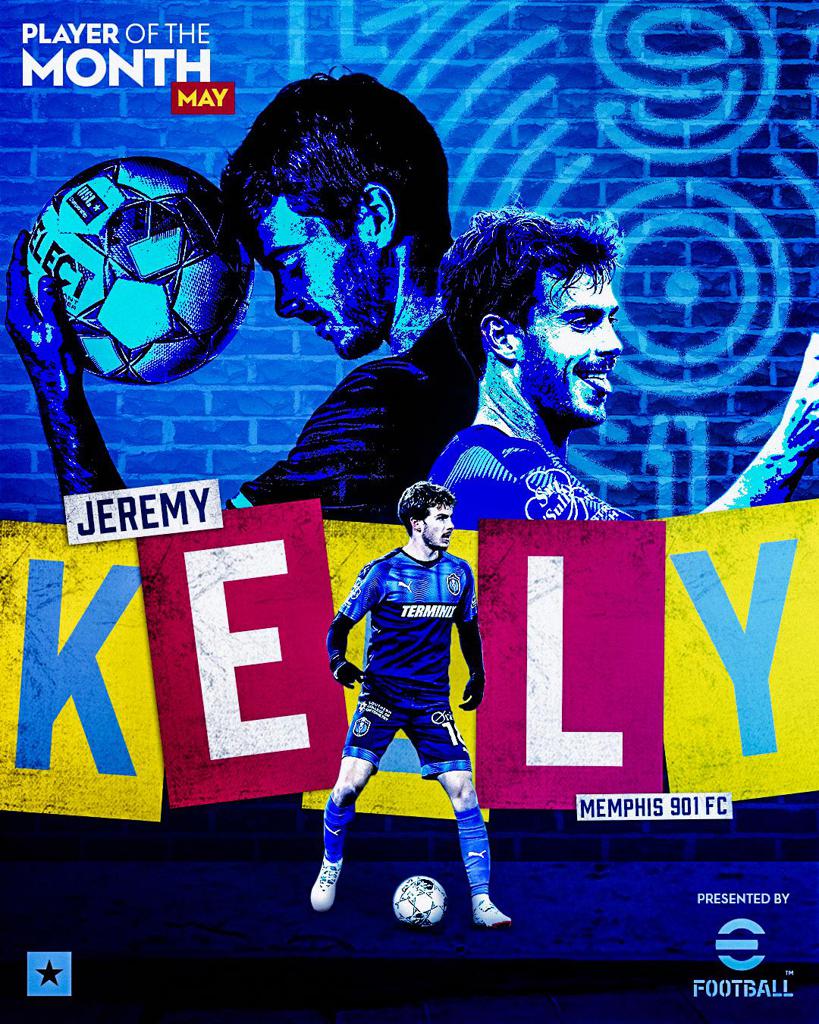 “He’s one of our best ball-strikers,” said Pirmann. “He’s two-footed, he can pass, he can cross, he can shoot, he can dribble excellently. The surprise, I guess, would be a little bit is how effective he is in the final third, which is probably the most difficult thing to do in football. … It’s one of those things, when I get out of the way, let him be himself and play football, he’s a fantastic player, fantastic teammate. You let those guys do their thing and they continue to produce.”

A Chapel Hill, North Carolina native, Kelly competed for the University of North Carolina collegiately. As the cliché goes for some players, the further he progressed in the game, the further away he got from the opposition goal. As a Tar Heel, Kelly never recorded more than four assists in a season, instead serving as a central piece in a side that went to consecutive College Cups in his freshman and sophomore seasons.

A First-Round selection in the 2020 MLS SuperDraft, the 24-year-old is now showing just what he can bring at the attacking end of the field, providing Memphis’ burgeoning attacking with creativity and finishing that could carry the side even further than its first postseason appearance a season ago.

“I think it’s just a byproduct of the hard work that goes into the game,” said Kelly of the side’s success. “Just thinking about goals and assists, you know, it’s a byproduct of us playing well, us moving the ball around, defending, and then we get the opportunities. We have very good players, and when very good players work hard and are selfless, this is what ends up happening.”

Kelly received 40 percent of a weighted poll that included the USL Championship Technical Committee, a national panel of independent media representing every USL market and an online fan vote held at USLChampionship.com. Oakland Roots SC’s Ottar Magnus Karlsson finished second on 20 percent after recording four goals in four games on his way to taking the lead in the race for the USL Championship’s Golden Boot, while El Paso Locomotive FC’s Luis Solignac and Orange County SC’s Milan Iloski finished tied for third after each recording four goals and one assist for their respective sides throughout the month.

USL Championship Player of the Month – May 2022