TAMPA, Fla. – The USL Championship announced the Team of the Week for Week 13 of the 2022 regular season on Tuesday, with Indy Eleven forward Manuel Arteaga voted the Championship Player of the Week presented by Konami eFootball after recording a first-half hat trick against the Charleston Battery on Saturday night in a 4-3 victory for the Boys in Blue at Patriots Point.

Now in his second season with Indy, Arteaga broke out for his first goals this season against Charleston and in the process scored the first hat trick for the club since it joined the USL Championship prior to the 2018 season. The Venezuelan forward struck first in the 25th minute to double Indy’s lead and then added goals in the 28th and 37th minute to complete a 12-minute hat trick, one of the fastest in the USL Championship’s history after Dane Kelly’s eight-minute hat trick during the 2017 season for Reno 1868 FC against Tacoma Defiance.

Arteaga earned 69 percent of the ballot to claim the award. Atlanta United 2’s Robbie Mertz finished second on 15 percent after recording three goals across two outings for his side against Rio Grande Valley FC and Memphis 901 FC last week. 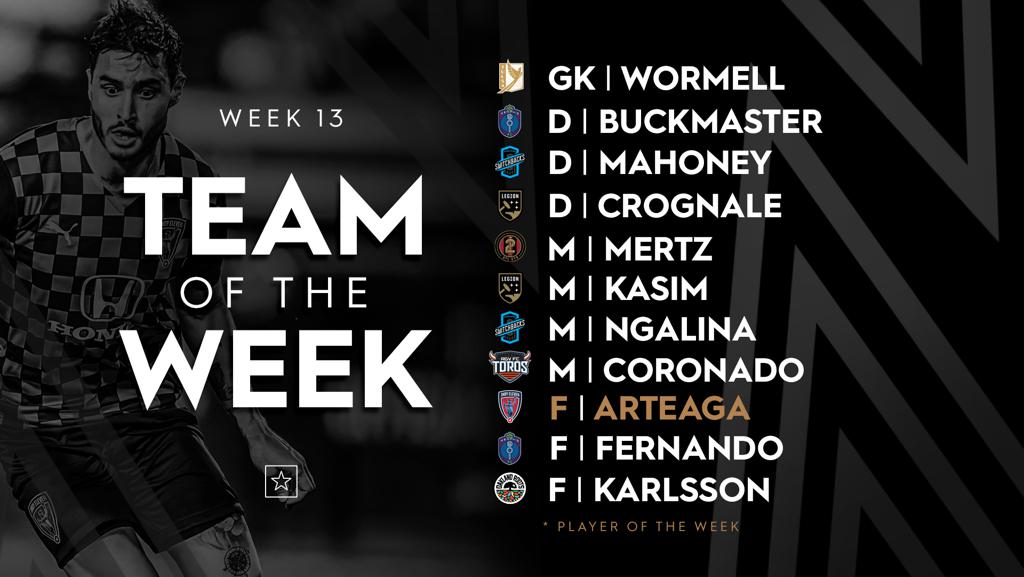 GK – Austin Wormell, FC Tulsa: Making his first two starts of the season, Wormell made 10 saves on 11 shots on target faced as Tulsa drew with both the Tampa Bay Rowdies and Miami FC, posting a cumulative -2.53 Goals Minus Expected Goals rate across the two contests.

D – Matt Mahoney, Colorado Springs Switchbacks FC: Mahoney scored the third goal of the night to cap a strong performance overall as he completed 67 of 75 passes, won 3 of 3 aerial duels and made nine recoveries and two interceptions in Colorado Springs’ 3-0 win against Las Vegas.

M – Prosper Kasim, Birmingham Legion FC: The Ghanaian scored the only goal as Birmingham earned victory against Phoenix Rising FC at Wild Horse Pass and ended the night with four shots and four chances created while completing 4 of 6 dribbles and winning 5 of 9 duels.

M – Robert Coronado, Rio Grande Valley FC: Coronado came off the bench to lead the Toros to a dramatic 4-3 victory against Atlanta United 2 on Wednesday night, scoring the final two goals including the winner in the second minute of stoppage time on four shots while completing 10 of 13 passes.

F – Manuel Arteaga, Indy Eleven: Arteaga scored a first-half hat trick the span of 12 minutes to get off the mark this season and recorded six shots overall, all of which were on target, to lead Indy to a 4-3 victory against the Charleston Battery on Saturday.

F – Luiz Fernando, Memphis 901 FC: The Brazilian notched a pair of assists and had six chances created overall while recording two shots, completing 5 of 7 dribbles and winning 10 of 15 duels in Memphis’ 5-2 victory against Atlanta United 2 on Saturday.

F – Ottar Magnus Karlsson, Oakland Roots SC: Karlsson scored a pair of goals, including a stoppage-time winner against Orange County SC on Wednesday night, and then notched an assist in Oakland’s win in Monterey Bay on Saturday to guide a six-point week for Roots SC.