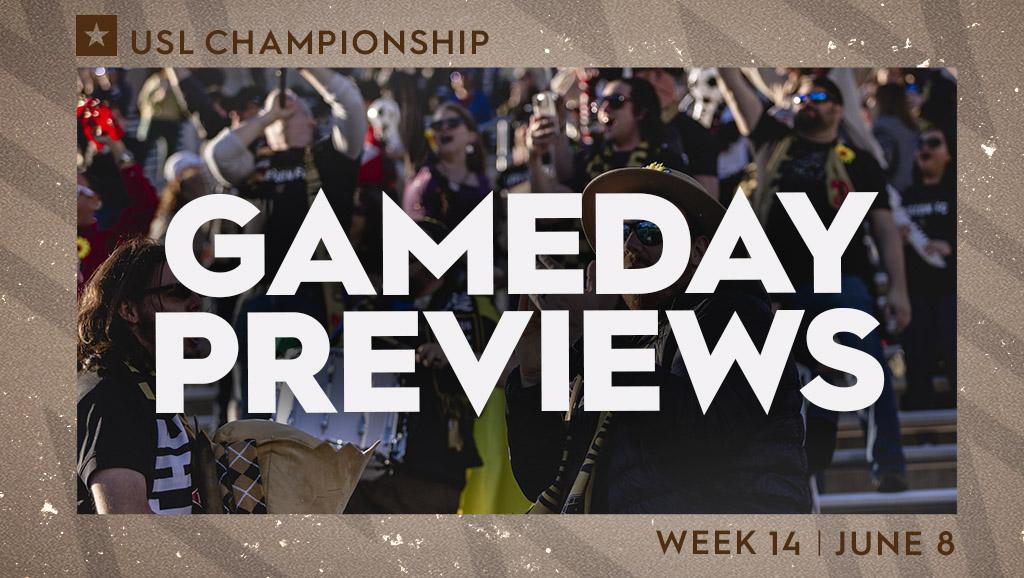 Two of the USL Championship’s strongest rivals square off on Wednesday night in the highlight of a three-game slate to open Week 14 that also includes a key game in South Florida bringing together two teams just above the playoff line in the Eastern Conference.

The Lowdown: Miami FC and Indy Eleven sit level on points in the final two playoff positions in the USL Championship’s Eastern Conference as they prepare to square off on Wednesday night in South Florida. The contest will be the first league meeting between the clubs in more than four years, with the sides last having met in September 2017 as the regionalized action of the past two seasons resulted in no meetings between the sides since Miami joined the Championship in 2020. The hosts enter after earning a 0-0 draw on the road against FC Tulsa this past Saturday as goalkeeper Connor Sparrow recorded his sixth shutout of the season, second in the league to Louisville City FC’s Kyle Morton. Indy, by contrast, saw its attack lead the way in a 4-3 victory against the Charleston Battery last Saturday at Patriots Point that saw Manuel Arteaga record a first-half hat trick, the first for the Boys in Blue since they joined the Championship prior to the 2018 campaign. Indy’s performance was boosted by recent acquisition Solomon Asante, who notched his second and third assists of the seasons in the win to move into a tie for second place all-time in the league’s regular season with 44 for his career. The visitors have alternated wins and losses over their past five games, though, and will be hoping to begin another winning streak as they seek their first victory at Riccardo Silva Stadium in club history after losing three of four prior visits.

Spotlight Players
Miami FC – Ben Ofeimu: The young center back will need to put in a strong performance to try and limit Indy’s attacking potential, with the visitors having recorded nine goals over their past five outings.

Indy Eleven – Stefano Pinho: The former Miami standout returns to face his former club in positive form, having recorded a team-leading six goals this campaign while also notching three assists for the Boys in Blue.

The Lowdown: Both Loudoun United FC and the New York Red Bulls II will try to get back into the win column as they square off for the second time this season. Both teams are on lengthy winless streaks with Loudoun looking for its first win since defeating the Red Bulls II on March 19 in its second outing of the season, and New York hoping to claim its first win since March 16 against Atlanta United 2, its lone victory so far this campaign. Both sides are coming off draws in their most recent outings, however, with the Red Bulls II having earned a 2-2 result against San Diego Loyal SC last Thursday evening at Red Bull Arena as United States U-20 international Caden Clark and Sam Williams each found the net, with Williams’ goal his first in the professional ranks. Loudoun, meanwhile, played to a 1-1 draw against the Charleston Battery that saw the side conceded a late equalizer on home turf, but the hosts could be hopeful of success after that 3-0 win early in the season that saw Tyler Freeman score twice and Jacob Greene once at MSU Soccer Park.

Spotlight Players
Loudoun United FC – Jacob Greene: The 19-year-old hasn’t found the net since Loudoun’s victory against New York earlier this season but has been a creative threat for the side, recording 20 chances created in 12 appearances.

New York Red Bulls II – Sam Williams: Coming off his first goal in the professional ranks, the 17-year-old midfielder will try to continue to impress, carrying an 82 percent passing accuracy rate into the contest.

The Lowdown: Eastern Conference leaders Memphis 901 FC will head to Birmingham Legion FC’s Protective Stadium for the next chapter in the Southern Harm rivalry with both teams coming off positive results last time out. Legion FC moved within a point of the Eastern Conference playoff positions on Saturday night as Prosper Kasim’s goal proved the difference in a 1-0 win against Phoenix Rising FC at Wild Horse Pass, with goalkeeper Matt VanOekel recording his fourth shutout of the season for the visitors. Birmingham has been solid overall defensively again this campaign, conceding only 12 goals in 13 outings overall, but that record should be tested by Memphis’ attack, which is tied for second in the Championship’s with 27 goals this season after running out to a 5-2 victory against Atlanta United 2 in its last outing on Saturday. The victory was 901 FC’s fifth in a row to move one point ahead of Louisville City FC in the conference standings, with a balanced attack that has seen Phillip Goodrum notch seven goals and Jeremy Kelly a league-leading six assists helping lead the way. After Memphis claimed the series a season ago with a 2-1-1 record – capped by Raul Gonzalez’s memorable stoppage-time winner for 901 FC in AutoZone Park in the season finale – we could see more fireworks in a series that currently sits at three wins apiece and four draws in 10 prior league meetings.

Spotlight Players
Birmingham Legion FC – Enzo Martinez: Noted Memphis-destroyer Bruno Lapa (five goals in five games) is out through injury, but Martinez has recorded one goal and three assists against 901 FC previously in his career and could step to the fore here.

Memphis 901 FC – Aaron Molloy: The central midfielder has recorded four goals and two assists so far this season and will likely need to play a major role in controlling the tempo for the visitors against Birmingham’s solid midfield corps.