TAMPA, Fla. – The USL Championship announced the Team of the Week for Week 12 of the 2022 regular season on Tuesday, with New Mexico United midfielder Justin Portillo voted the Championship Player of the Week presented by Konami eFootball after recording three goals and one assist across two victories for United that moved the side into the playoff positions in the Western Conference.

An offseason arrival from Real Salt Lake, Portillo currently leads the USL Championship with 35 chances created this season and bagged his first two goals for New Mexico as well as one assist on Tuesday night as the side took victory against Phoenix Rising FC. The 29-year-old then added a brilliant finish to open the scoring in New Mexico’s 2-1 win on Saturday evening against Indy Eleven, a result that completed an undefeated five-game month for the side.

Portillo earned 80 percent of the ballot to claim the award. Louisville City FC’s Cameron Lancaster finished second on 20 percent as he recorded a pair of goals in his return to the starting lineup after a preseason injury on Saturday to lead LouCity to a 4-1 victory against FC Tulsa at Lynn Family Stadium. 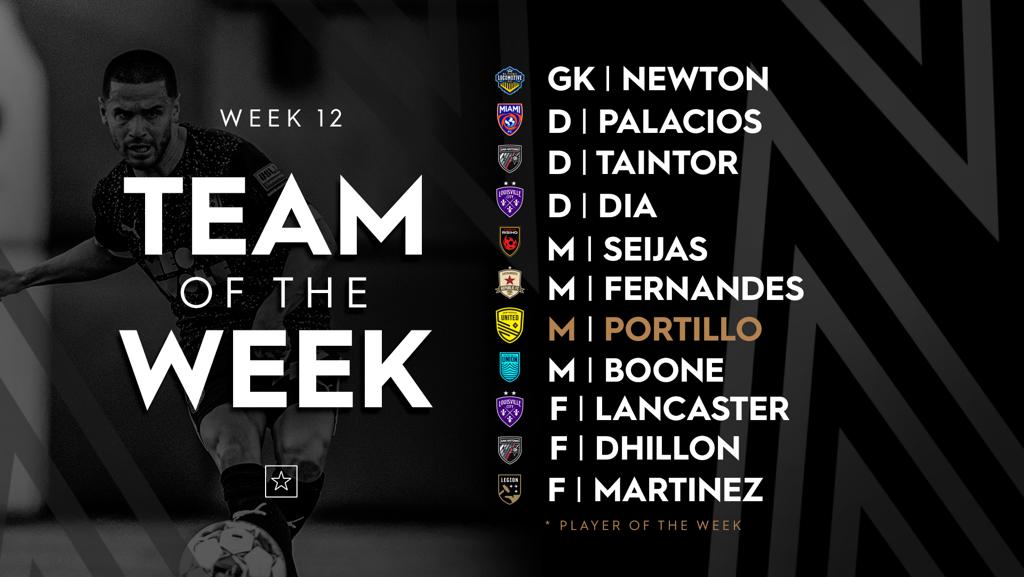 GK – Evan Newton, El Paso Locomotive FC: Newton posted a six-save shutout and a Goals Minus Expected Goals mark of -1.46 to help a 10-man Locomotive FC take a 1-0 victory on the road at Las Vegas Lights FC on Friday night.

D – Junior Palacios, Miami FC: Palacios scored the opening goal for Miami in a 2-2 draw against Pittsburgh Riverhounds SC and won 8 of 9 duels and 3 of 4 aerial duels while completing 43 of 59 passes at Riccardo Silva Stadium.

D – Amadou Dia, Louisville City FC: Dia recorded one assist and had three chances created overall in the attacking third and also won 5 of 6 duels and 4 of 4 aerial duels defensively on top of three interceptions and six recoveries at Lynn Family Stadium.

M – Luis Manuel Seijas, Phoenix Rising FC: Seijas drove Rising FC creatively as the side rallied for a 2-1 victory at Hartford Athletic, recording one assist, nine chances created and three shots while completing 44 of 48 passes and winning 2 of 2 tackles and 4 of 7 duels at Trinity Health Stadium.

M – Justin Portillo, New Mexico United: Portillo recorded three goals and one assist across a pair of outings for New Mexico over the week, while completing 74 of 83 passes, winning 10 of 14 duels and notching five chances created in a pair of victories for his side.

F – Cameron Lancaster, Louisville City FC: The English forward marked his return to the starting lineup from injury with a pair of goals in LouCity’s 4-1 win against FC Tulsa on Saturday, recording four shots overall and completing 12 of 14 passes at Lynn Family Stadium.

F – Justin Dhillon, San Antonio FC: Dhillon scored a pair of goals on three shots as part of a strong all-around performance that saw him win 2 of 2 tackles and complete 12 of 18 passes in SAFC’s 3-2 victory at Rio Grande Valley FC in the South Texas Derby.