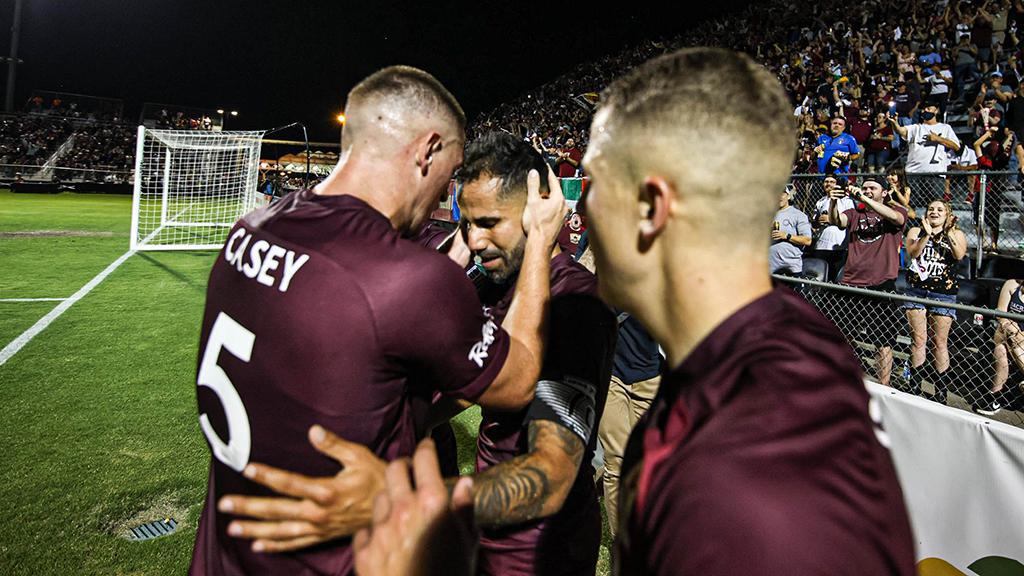 With the temperature at Sacramento Republic FC’s Heart Health Park in the mid-90s at kickoff, and barely easing off as the night progressed, it was assured to be a taxing contest physically for the players of both Republic FC and the San Jose Earthquakes on Wednesday night in the Round of 16 of the 2022 Lamar Hunt U.S. Open Cup.

That was likely even more so for 35-year-old Republic FC captain Rodrigo Lopez, who at kickoff was the second-oldest player on the field to San Jose veteran and fellow captain Shea Salinas, 10 months his senior.

When the moment to deliver the decisive blow arrived 83 minutes into a hard-fought clash between the two NorCal sides, however, Lopez rose to meet it.

Lopez’s thunderbolt from outside the top-right edge of the penalty area whistled into the top-left corner of the net. A despairing dive from the Quakes’ Matt Bersano saw the goalkeeper get a hand to the ball, but it was never going to be enough to deny the latest chapter of the legendary feats Lopez has accomplished in Old Glory Red.

Sacramento’s 2-0 victory to book a place in the Quarterfinals of the Open Cup for the first time in club history – and a date with the LA Galaxy on June 21 at Dignity Health Sports Park – also continued Republic FC’s remarkable home history in the tournament. The hosts are now 16-1 all-time at Heart Health Park in the tournament, with Wednesday marking the third time an MLS club had tried to claim victory on Sacramento’s home turf and suffered defeat.

While Lopez provided the exclamation point, the victory was built on a foundation of endeavor and fight shown throughout the lineup. The Quakes recorded 17 shots, five of which found their way through to Sacramento goalkeeper Danny Vitiello to deny, but the visitors found little in the way of major chances to swing the contest their way.

“The fight that the guys put in tonight was incredible,” said Republic FC midfielder Luis Felipe Fernandes. “The crowd was supporting us throughout the whole night. Having our back. I think we worked hard throughout the week, we watched video on them. We watched all their strengths and I think we put in everything that we worked on. Felt great to have everyone here watching us and for me it was a special night.”

A Quakes player for three seasons, Fernandes delivered the opening goal just before the half-hour mark as he rose to head powerfully at the near post after Lopez delivered an ideal corner kick from the left to cap a strong passage of pressure from the hosts. Sacramento’s trio of center backs were industrious throughout, with Dan Casey recording nine clearances, while the midfield trio of Fernandes, Matt LaGrassa and Nick Ross provided a shield and defensive shape. Forced to look to the flanks for success, the Quakes took 28 crosses on the night, but completed only six as Vitiello commanded his penalty area strongly and his defense recorded 30 clearances.

More than that, though, the night was a throwback for Lopez to when he first arrived in California’s capital. The first signing for Republic FC before its inaugural season in 2014 – and the central figure in nights like the Miracle at Bonney that inaugural campaign – the atmosphere from the sellout crowd of 11,569 fans reminded Lopez of his first seasons at the club as it drove him and his teammates on to another historic night.

“Coming into the stadium, I told our trainers today … I had vibes from like 2014, 2015,” said Lopez. “Coming out here with the sold-out stadium and the job that the front office did to make this happen, the fans that came out, I'm just super-happy. It pushes us. It gives us that extra push towards the end.” 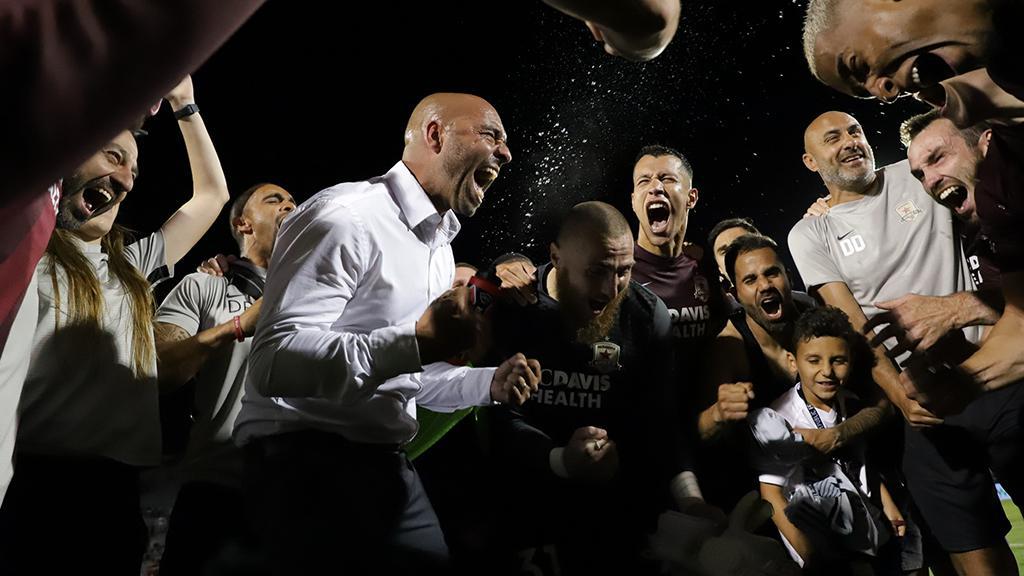 “Unbelievable,” added Republic FC Head Coach Mark Briggs. “I think you see at the end when it's getting close to the final whistle and you hear how loud this stadium was, you hear the Tower Bridge Battalion, and you hear everybody's screaming and stomping their feet. I'm sure tonight's result and atmosphere makes an impression on people around soccer in the U.S.”

Republic FC remains undefeated on its home turf this season, too, with its future plans for a new stadium at the city’s railyards set to provide the platform for the next decade of success in the club’s history.

While Republic FC will hit the road to face the Galaxy in four weeks seeking to become the first USL Championship club to reach the Semifinals in the tournament since FC Cincinnati five years ago, the will and desire the visitors displayed on Wednesday night delivered a message.

The Indomitable club remains in all its glory.

“We have nothing to lose at this point,” said Lopez. “Tonight, that was the message. We had nothing to lose. Go out and enjoy yourselves and win or lose, just give it your all.

“The guys played a phenomenal job in the back. It was amazing to see every time someone got the ball up top for them, you had guys diving at the ball. It's throwing their bodies out and that's when you see that, you have a championship team.”