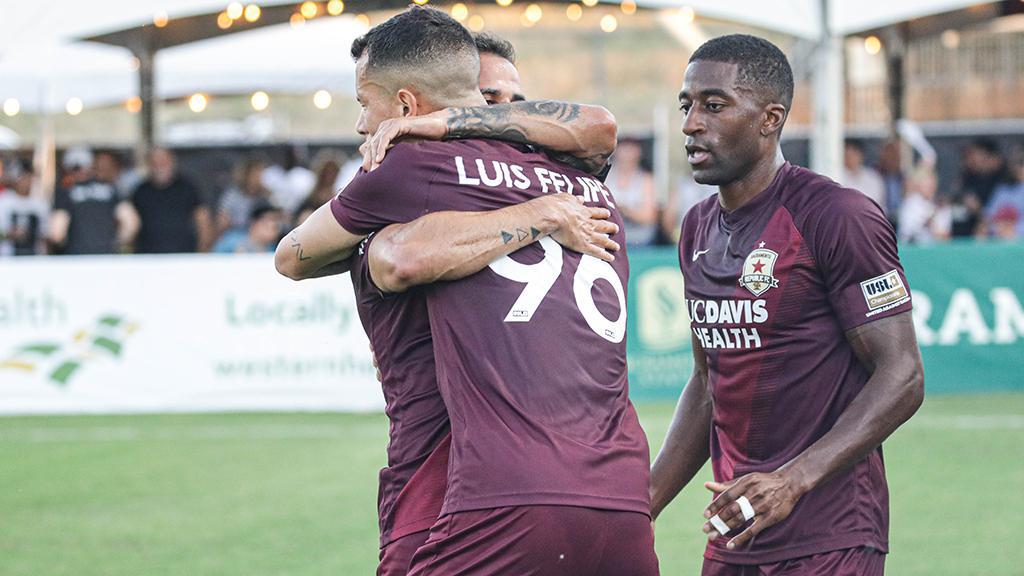 SACRAMENTO, Calif. – Add another chapter to the legend of Rodrigo Lopez.

Sacramento Republic FC’s talisman, and the author of so many memorable moments at Heart Health Park over the years, recorded a goal and assist to lead the Boys in Old Glory Red to a 2-0 victory against the San Jose Earthquakes before a sellout crowd of 11,569 fans at Heart Health Park in the Round of 16 of the 2022 Lamar Hunt U.S. Open Cup on Wednesday night.

The victory marked the first for Republic FC against its NorCal rivals in the Open Cup and secured the club’s first berth in the Quarterfinals of the historic tournament, where Sacramento will face the LA Galaxy next month.

The game opened quietly, and it wasn’t until the 17th minute when the Quakes were the first to threaten. Jack Skahan’s initial shot from distance was only parried by Sacramento goalkeeper Danny Vitiello, only for Will Richmond to fail to get full purchase on his follow-up chance allowing Vitiello to gather. As the half progressed, though, Republic FC came into the contest and began to create chances. In the 24th minute, Honduran international Douglas Martinez fired a low cross from the right side of the penalty area to Zeiko Lewis, whose first-time shot was blocked by Richmond as the hosts began to gain the upper hand.

Three minutes later, Republic FC threatened again as Martinez screened a defender to set up Lios Felipe Fernandes for a powerful low shot from the left side of the box that was parried by San Jose goalkeeper Matt Bersano. A minute later, Fernandes wasn’t to be denied a second time as off a corner kick from the left by Lopez, the midfielder rose highest at the near post and produced a powerful header Bersano was unable to keep out, the ball spinning over the goal line to send the home crowd into celebration.

Martinez had a chance of his own five minutes before the break as he outmuscled a defender to win possession on the right and drove into the penalty area before firing a shot through the six-yard area and wide, but Sacramento took its lead to the halftime break. The Quakes came out positively to start the second half, however, but while they put Sacramento on its heels at times a big opportunity didn’t immediately present itself.

That came instead to the hosts, as substitute Luther Archimede broke forward and was brought down just outside the top-left edge of the penalty area. Lopez’s initial effort went into the wall, but the second opportunity for the veteran playmaker went through and forced a good save by Bersano to keep Republic FC from adding to its lead.

San Jose looked to call on the cavalry as the second half continued, and Chase Cowell found space for a curling shot from the left side of the penalty area that flashed just wide of the top-right corner with 14 minutes to go. Javier Lopez also went close for the visitors, but in the 84th minute, Lopez added to his legend. Receiving possession on the right side, Lopez stepped into space and unleashed a shot that flew into the top-left corner of the net for a two-goal advantage.

The Quakes tried to respond, and with four minutes remaining Cristian Espinoza curled a shot just wide of the right post. Other chances arrived as the visitors tried to apply pressure as both Cowell and Jeremy Ebobisse had efforts go off target in the final two minutes. Republic FC held firm, however, to secure another magical night led by the club’s biggest figure.