TAMPA, Fla. – The USL Championship announced the Team of the Week for Week 11 of the 2022 regular season on Tuesday, with Memphis 901 FC forward Phillip Goodrum voted the Championship Player of the Week presented by Konami eFootball after notching two goals and two assists across his side’s two victories over the past seven days, which sent Memphis into first place in the Eastern Conference.

The Tennessee native joined Memphis this offseason and has quickly fit into the club’s new-look lineup, leading 901 FC with five goals so far this campaign. Over the past week, the 24-year-old notched a goal and assist first in Memphis’ 5-0 victory at home on Wednesday night against the LA Galaxy II, and then again in a 3-0 win on Sunday night on the road against Loudoun United FC as 901 FC ran its winning streak to four games to pass Louisville City FC and Detroit City FC for first place in the Eastern Conference standings.

Goodrum earned 38 percent of the ballot to claim the award. 901 FC teammate Jeremy Kelly finished in second place on 25 percent after also notching a goal and assist in both of Memphis’ victories, with Kelly’s two assists moving him into the league lead with six helpers so far this season. 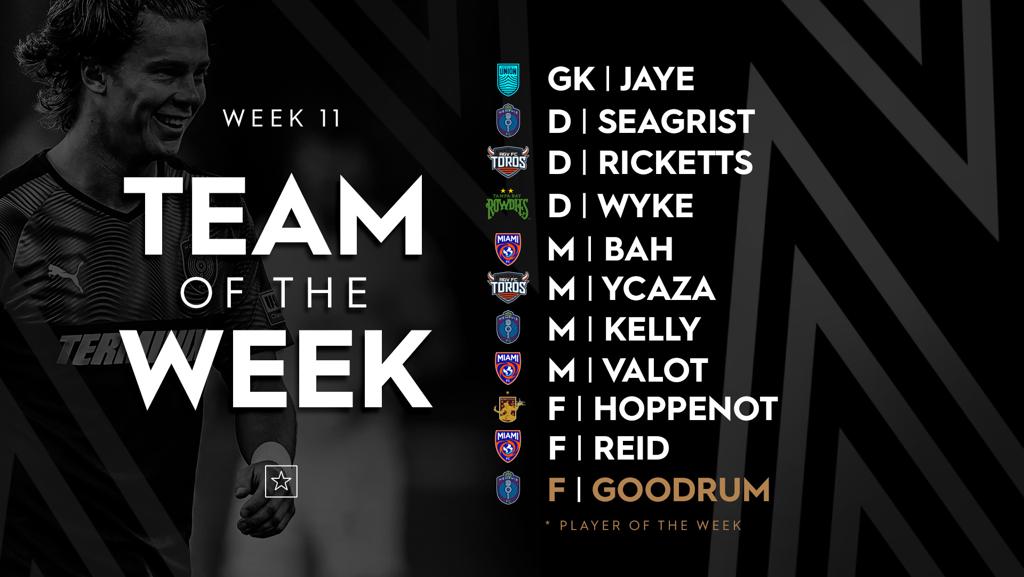 D – Jonathan Ricketts, Rio Grande Valley FC: Ricketts put in a solid defensive display for the Toros in a 2-1 win against San Diego Loyal SC, winning 3 of 3 tackles and 8 of 12 duels while making 10 recoveries and three interceptions at H-E-B Park.

M – Othello Bah, Miami FC: The Liberian international recorded a pair of goals to help lead Miami to a 4-0 victory against the Charleston Battery while also completing 33 of 37 passes and winning 7 of 13 duels for the visitors at Patriots Point.

M – Jeremy Kelly, Memphis 901 FC: Kelly recorded a goal and assist in each of Memphis’ outings as 901 FC took victories against the LA Galaxy II and Loudoun United FC, moving to a league-leading six assists so far this season as Memphis moved into first place in the Eastern Conference.

M – Florian Valot, Miami FC: Valot broke through with a goal and assist in Miami’s 4-0 victory against the Charleston Battery on Saturday night after having recorded five chances created against Detroit City FC in the side’s opening game of the week last Wednesday.

F – Adonijah Reid, Miami FC: The Canadian forward scored an equalizer late in stoppage time to earn Miami a 1-1 draw against Detroit City FC on Wednesday night before notching a pair of assists in the side’s victory against Charleston on Saturday.