TAMPA, Fla. – The USL Championship announced the Team of the Week for Week 10 of the 2022 regular season on Tuesday, with Orange County SC forward Milan Iloski voted the Championship Player of the Week presented by Konami eFootball after recording the first hat trick of his professional career in OCSC’s 5-1 victory against FC Tulsa last Friday night.

An offseason arrival, Iloski scored the second hat trick of the 2022 Championship Regular Season as Orange County recorded the second five-goal half in the campaign, notching all five goals against Tulsa in the opening 45 minutes. Iloski’s first came in the ninth minute as he latched onto a through-ball by Mikko Kuningas – whose two assists also earned him a place on the Team of the Week – before finishing sharply to the left corner to stake the hosts to an early two-goal lead. The 22-year-old added a second in the 20th minute, sagging off his marker to create space for a cross by Brent Richards, before capping his scoring in the first minute of stoppage time with a fine strike from 20 yards.

Iloski earned 63 percent of the ballot to claim the award. The LA Galaxy II’s Cameron Dunbar finished second on 25 percent after recording a pair of goals in Los Dos’ 4-3 victory against Louisville City FC on Friday night, which brought the current Eastern Conference leader’s undefeated start to the season to an end. 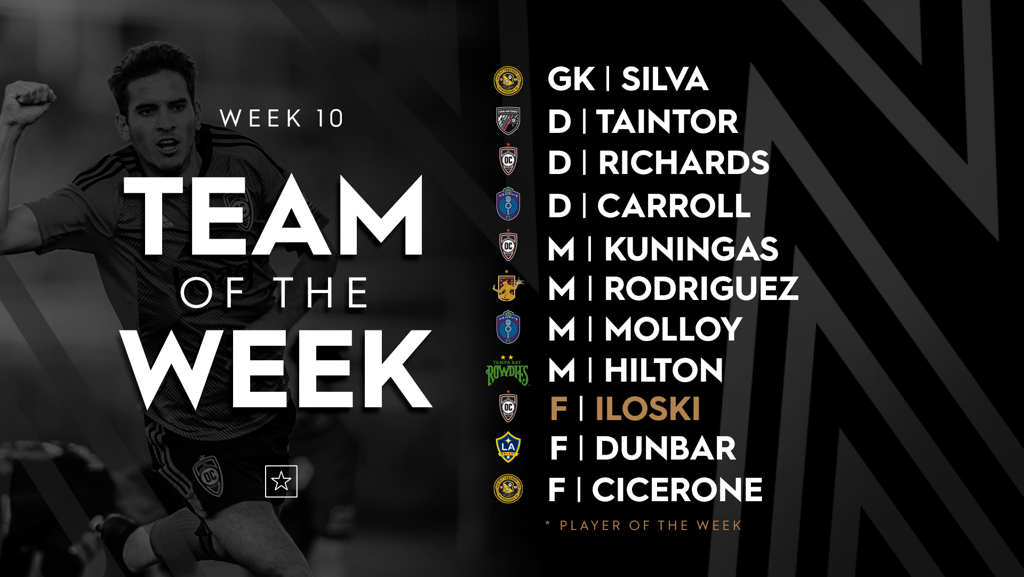 D – Mitchell Taintor, San Antonio FC: Taintor put in a stellar defensive display as San Antonio took a 2-0 victory on the road against Miami FC, winning 8 of 11 duels and 6 of 7 aerial duels and recording four interceptions while scoring a late penalty kick to ice the game.

D – Brent Richards, Orange County SC: Richards recorded one assist, two shots and four chances created as he joined the attack on the right flank and completed 46 of 54 passes and 3 of 3 dribbles in Orange County’s victory against Tulsa.

D – Zach Carroll, Memphis 901 FC: Carroll scored the opening goal in Memphis’ victory against Indy Eleven on Saturday night while defensively winning 6 of 6 duels and 5 of 5 aerial duels and making six clearances for the hosts at AutoZone Park.

M – Mikko Kuningas, Orange County SC: The Finnish playmaker recorded a pair of assists, had seven chances created overall and completed 44 of 47 passes and 2 of 2 dribbles as Orange County rolled to victory against FC Tulsa on Friday night.

M – Maxi Rodriguez, Detroit City FC: Rodriguez scored once on two shots, completed 34 of 45 passes and put in a big defensive display in midfield, winning 12 of 17 duels and 4 of 6 tackles while registering 13 recoveries in a 4-2 win against Loudoun United FC.

M – Aaron Molloy, Memphis 901 FC: Molloy put in an impressive shift in the center of midfield, completing 43 of 48 passes and recording three chances created while winning 6 of 9 duels and making four interceptions and 13 recoveries in 901 FC’s 2-1 win against Indy Eleven.

M – Lewis Hilton, Tampa Bay Rowdies: The English midfielder ran the show for the Rowdies in their 5-1 win on the road at Phoenix Rising FC, completing 78 of 83 passes and recording one assist on four chances created while making 11 recoveries at Wild Horse Pass.

F – Milan Iloski, Orange County SC: Iloski scored the first hat trick of his professional career, and the fourth in Orange County’s history, as the hosts delivered a five-goal first half in their victory against FC Tulsa at Championship Soccer Stadium.

F – Cameron Dunbar, LA Galaxy II: The 19-year-old scored a pair of goals on three shots as Los Dos handed Louisville City FC its first loss of the season in a 4-3 victory on Friday night, while also completing 7 of 8 passes and winning 4 of 8 duels.

F – Russell Cicerone, Pittsburgh Riverhounds SC: Cicerone scored the only goal as the Hounds took victory against El Paso Locomotive FC as part of a strong all-around performance in which he recorded four shots and three chances created and won 6 of 10 duels and completed 4 of 6 dribbles.