Penalty denial highlights six-save shutout as Fernandes, Martinez find net in win to reach Round of 16. 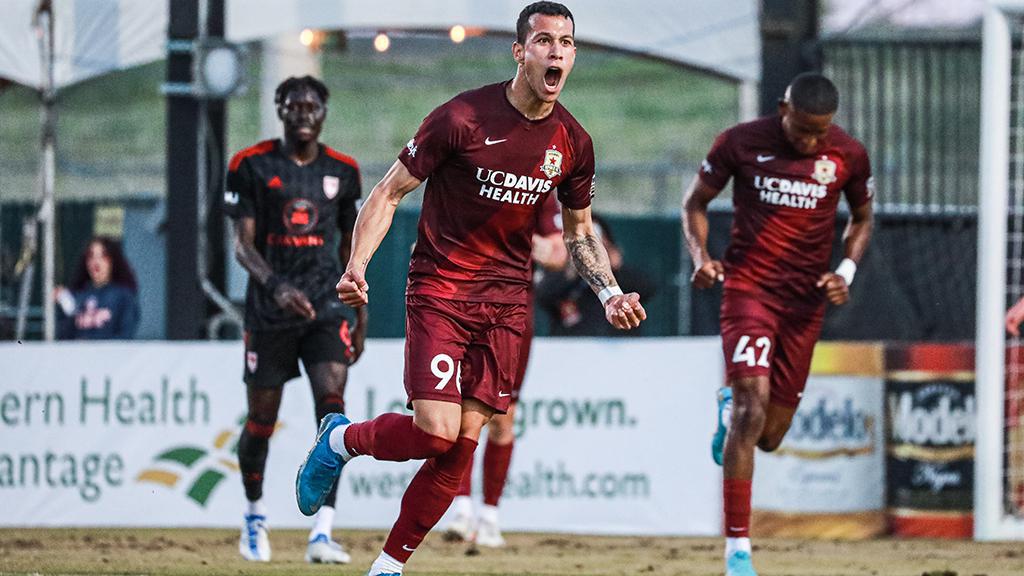 SACRAMENTO, Calif. – The Republic marches on.

Sacramento Republic FC goalkeeper Danny Vitiello recorded a six-save shutout, including a key penalty kick save late in the first half, as goals by Luis Felipe Fernandes and Douglas Martinez Jr. earned the hosts a 2-0 victory against fellow USL Championship side Phoenix Rising FC on Wednesday night at Heart Health Park to advance to the Round of 16 in the 2022 Lamar Hunt U.S. Open Cup.

Republic FC got out on the front foot and had a pair of chances in just the third minute as first Dan Casey volleyed over the crossbar before Martinez got in behind the Phoenix defense, drawing goalkeeper Ben Lundt off his line to the top-right of his penalty area, only to send his curling finish wide of the far post. The Honduran international again got in behind in the 11th minute, this time into the right channel, but he dragged his finish wide of the left post.

Phoenix got its first good look on goal in the 17th minute when Santi Moar ran down a long ball into the left corner and worked his way into the penalty area before firing a low shot that Vitiello saved, but just before the half-hour mark Republic FC grabbed the lead. After a corner kick was half-cleared to the top-left edge of the penalty area, Matt LaGrassa played a short pass to Fernandes in the left side of the box for a low shot through traffic that found the right corner.

Rising FC almost hit back in the 35th minute when off a corner kick from the right, Marcus Epps produced a powerful header that Vitiello palmed onto the crossbar before the ball bounced down onto the goal line and spun out, allowing the host to clear. Vitiello then came up with two more big saves three minutes before halftime after Phoenix’s Arturo Rodriguez was brought down in the penalty area, only for the goalkeeper to make a low save on Greg Hurst’s initial penalty kick and follow-up chance on the rebound to keep Sacramento ahead at the break.

Hurst went close again for the visitors two minutes into the second half as he shot just wide of the right post after the ball bounced loose in the penalty area after a corner kick. Sacramento’s Rodrigo Lopez narrowly missed soon after in the 53rd minute as he dribbled into the penalty area but shot wide, while 15 minutes later Rodriguez had a low effort saved by Vitiello from 20 yards out. With two minutes to go, however, Republic FC wrapped up a place in the Round of 16 for the third time in its history as Martinez rose highest to head home off a corner kick from the right by Emil Cuello to advance.