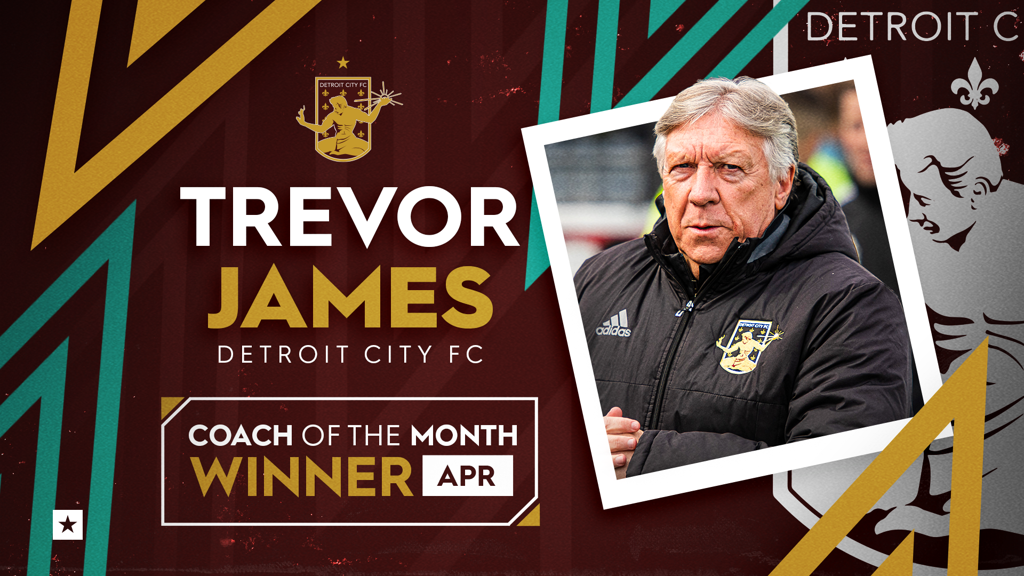 TAMPA, Fla. – Detroit City FC’s move up to the USL Championship for the 2022 season provided a major preseason storyline with the club’s on-field success and remarkable off-field culture having made it one of the best-known teams in American soccer.

DCFC has more than lived up to the hype. Through the end of April, the club sat in second place in the USL Championship’s Eastern Conference standings having taken four consecutive victories in the league to complete an undefeated second month in the second tier. On Wednesday, Detroit City FC’s Trevor James was honored as the USL Championship Coach of the Month as his stewardship from the sideline helped pave the way to continued success for Le Rouge.

Detroit posted a 4-0-1 record during April in the league, while also claiming the club’s first Lamar Hunt U.S. Open Cup victory against the Columbus Crew at Keyworth Stadium. The side recorded 10 goals and conceded just twice in the league, with its ability to make in-game adjustments to a strong foundation a notable element to its success.

DCFC outscored its opponents 7-0 in the second half of contests, including rallying for a stoppage-time victory on the road against Hartford Athletic on April 23 that saw captain Stephen Carroll grab the late winner. A former player, assistant coach, and scout during a lifetime in the sport, James has led DCFC to success since becoming Head Coach in 2019, and has positioned the side for further success after a sterling start to life in the Championship.

James received 44 percent of the vote to take the second monthly award of the season. Indy Eleven’s Mark Lowry finished second with 24 percent after leading the side to an undefeated month in Lowry’s second month at the helm in the Circle City, while Louisville City FC’s Danny Cruz finished third on 14 percent as the Eastern Conference’s top club remained undefeated, continuing its best start to a season.