Morton’s second-round save proves key as Soler scores decisive goal from spot for visitors before 6,837 at Keyworth Stadium 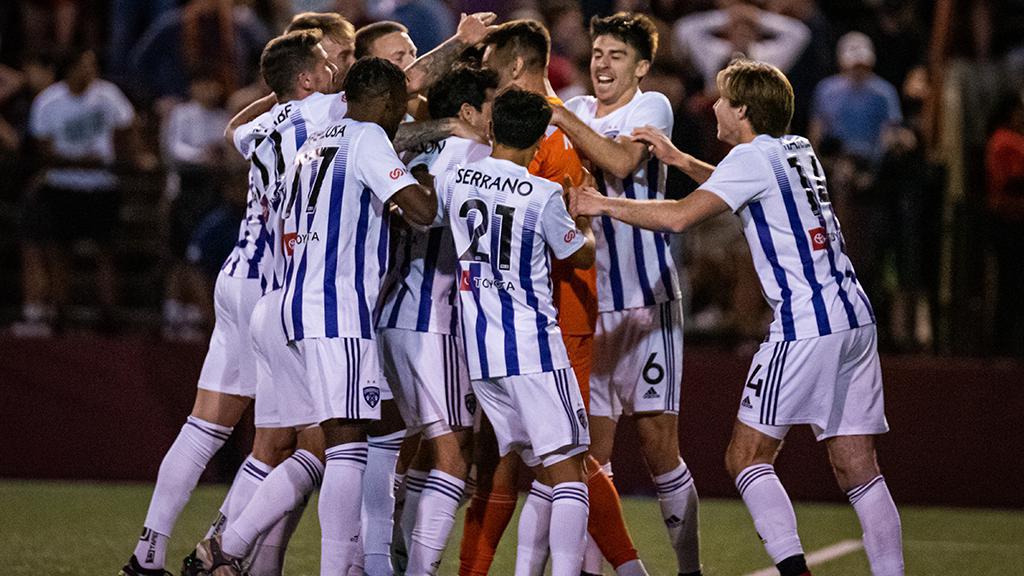 Louisville City FC players celebrate after claiming a 4-2 victory in a penalty shootout against Detroit City FC to advance to the Round of 16 in the 2022 Lamar Hunt U.S. Open Cup. | Photo courtesy Jon DeBoer / Detroit City FC

Six years on from the first Lamar Hunt U.S. Open Cup meeting between Louisville City FC and Detroit City FC saw the two-time USL Championship title winner advance in a penalty shootout, the veteran squad stepped up to the spot once again and earned a 4-2 victory to eliminate DCFC to advance to the Round of 16 in the 2022 Open Cup, ending a dramatic night of action before a packed house of 6,837 fans at Keyworth Stadium.

After the teams played to a 1-1 draw after 120 minutes of action that saw Detroit City’s Maxi Rodriguez open the scoring from the spot in the 14th minute before Wilson Harris leveled 10 minutes later for the visitors, LouCity gained the edge in the shootout in the second round. Niall McCabe fired home into the top-left corner of the net as DCFC goalkeeper Nathan Steinwascher went the opposite way, and LouCity’s Kyle Morton made a decisive save on a low shot to the left corner by Rhys Williams.

The sides exchanged goals in the third round to keep Detroit in with a chance as Antoine Hoppenot converted against his former team for the hosts. After Ian Soler roofed his shot to open the fourth round for Louisville, however, DCFC captain Stephen Carroll shot over the crossbar, sending LouCity into the Round of 16 for the second time in their history.

The shootout win was the second in a row for LouCity in the tournament, with the side having had to go 10 rounds to get past St. Louis CITY 2 at Lynn Family Stadium in the prior round. The dramatic conclusion followed a game that delivered a high-paced first half that saw both sides entertain, with Detroit’s Francis Atuahene and LouCity’s Brian Ownby both going close to scoring in the opening 10 minutes. DCFC promptly took the lead just prior to the quarter-hour mark after Atuahene was adjudged to have been brought down in the penalty area, offering the chance for Rodriguez to step up to the spot and convert on a shot to the right corner.

Louisville looked to respond quickly and went close to equalizing off a free kick just three minutes later when Paolo DelPiccolo’s left-footed shot had the top-left corner picked out, only for Steinwascher to palm the effort onto the crossbar and control the rebound. Harris leveled with his seventh goal in all competitions this season in the 24th minute, though, as off a deeply hit corner kick from the left the ball was headed back across goal and fell loose in the center of the penalty area. Wesley Charpie’s initial shot was blocked, but Harris – who converted for Louisville in the shootout’s third round – was on hand to put home the second chance.

LouCity then almost took the lead a minute before the halftime break after a cross from the left by Jorge Gonzalez found Ownby at the far post for a looping header to the left corner that DCFC defender Devon Amoo-Mensah scrambled to head over the crossbar, capping a frenetic half. The pace slowed after the break, resulting in fewer chances, but Hoppenot had a big opportunity to put Detroit City ahead with 20 minutes to go as he got into the right side of the penalty area only to be denied by Morton.

Despite carrying the bulk of possession down the stretch, LouCity was unable to find a decisive chance, but the visitors carried their momentum into extra time and had a big opportunity to grab the lead inside the opening two minutes as Ray Serrano cut to the byline on the left and delivered a low cross that found Enoch Mushagalusa for a point-blank chance that Steinwascher repelled. Detroit City’s Pato Botello Faz also threatened in extra time, as did Harris after Mushagalusa played a clever give-and-go with McCabe in the left side of the penalty area before finding the forward with a low cross, only for his shot to be blocked by Amoo-Mensah. Both teams also had set piece opportunities late on but were unable to capitalize, sending the game to a shootout where LouCity held its nerve to deliver a repeat result from the last meeting between the sides.