TAMPA, Fla. – The USL Championship announced the Team of the Week for Week 8 of the 2022 regular season on Tuesday, with Birmingham Legion FC midfielder Prosper Kasim voted the Championship Player of the Week presented by Konami eFootball as he scored both goals in Legion FC’s 2-1 victory against the Charleston Battery last Wednesday night at Protective Stadium.

Kasim earned the second consecutive Player of the Week award for Legion FC after Enzo Martinez claimed Week 7’s honor and did so with an outstanding individual display in the attacking third. The Ghanaian delivered a game-winning goal for his second of the night that landed at No. 1 on ESPN’s Futbol Americas’ midweek goals countdown and overall had had six shots, created two chances and completed 30 of 37 passes to send Birmingham to its third win out of its past four games. 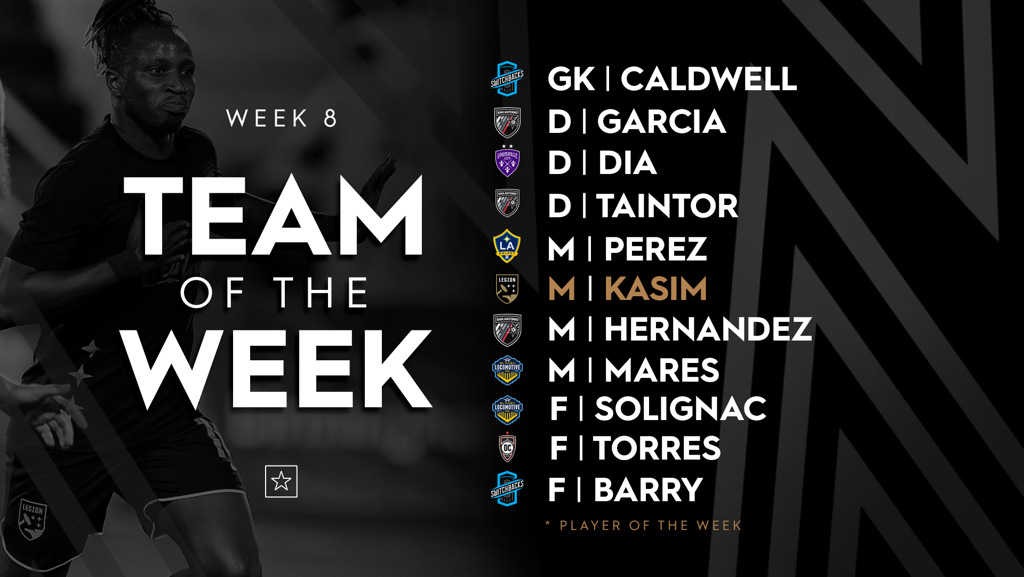 GK – Jeff Caldwell, Colorado Springs Switchbacks FC: The 2021 Goalkeeper of the Year finalist recorded a five-save shutout, including a key first-half penalty kick save, to keep the Switchbacks in the game before the side pulled away for a 3-0 victory on the road against Oakland Roots SC.

M – Jonathan Perez, LA Galaxy II: Perez recorded one goal and two assists and finished the night with four shots and seven chances created as he completed 37 of 41 passes overall and 7 of 9 dribbles and won 9 of 14 duels in Los Dos’ 3-0 win against Phoenix Rising FC on Sunday.

M – Prosper Kasim, Birmingham Legion FC: Kasim recorded both goals as Legion FC took a 2-1 win against the Charleston Battery on Wednesday night, including an excellent late winner, had six shots and two chances created overall and completed 30 of 37 passes.

M – Nicky Hernandez, San Antonio FC: Hernandez had a strong first start for SAFC, recording one goal and one assist while completing 14 of 19 passes overall, winning 2 of 2 tackles and making 10 recoveries in his side’s 6-0 win against Monterey Bay F.C.

F – Hadji Barry, Colorado Springs Switchbacks FC: The reigning Championship MVP had a goal and assist as the Switchbacks pulled away late to a 3-0 victory against Oakland Roots SC while completing 23 of 27 passes overall.