TAMPA, Fla. – The USL Championship announced the Team of the Week for Week 7 of the 2022 regular season on Tuesday, with Birmingham Legion FC forward Enzo Martinez voted the Championship Player of the Week presented by Konami eFootball as he recorded one goal and one assist in Legion FC’s 2-1 victory against Loudoun United FC on Sunday evening at Segra Field.

An offseason arrival at Legion FC, Martinez broke through to record his first goal in the club’s colors and also added an assist on Macky Diop’s finish with 11 minutes to go that sealed the victory for the visitors. One of only three players all-time to have recorded at least 40 goals and 30 assists in the league’s history, Martinez will look to carry his form into another important game for Legion FC on Wednesday night as the side hosts the Charleston Battery at Protective Stadium.

Martinez earned 47 percent of the ballot to claim the award. Phoenix Rising FC defender Kevon Lambert finished second on 27 percent after finding the net and putting in a big performance in the side’s back line in a 2-1 comeback victory against Miami FC on Saturday night. 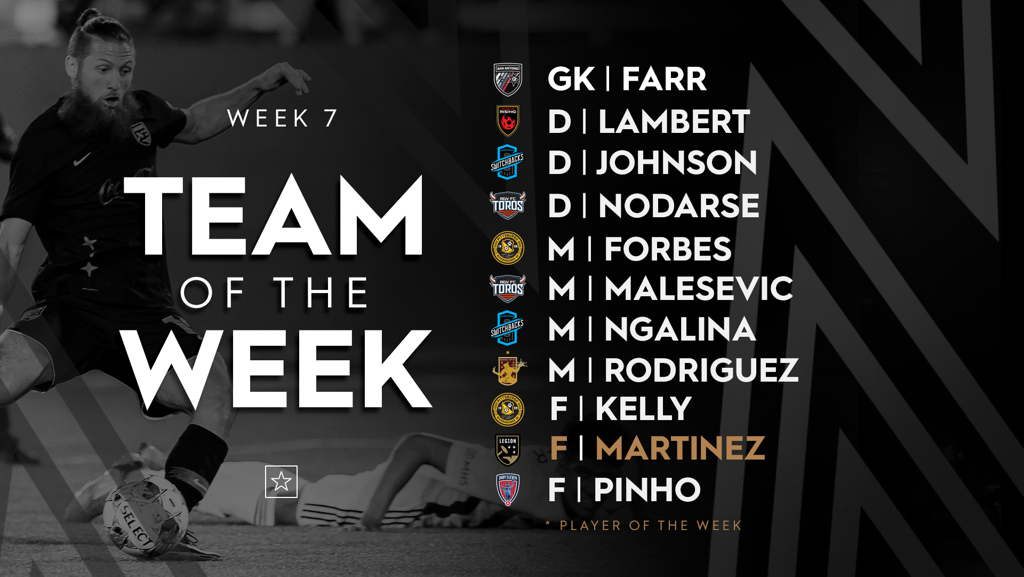 D – Kevon Lambert, Phoenix Rising FC: Lambert scored the game-tying goal for the hosts as part of a strong all-around performance that saw him complete 63 of 74 passes, win 6 of 8 duels and 5 of 6 aerial duels and recording four interceptions and 10 recoveries in a 2-1 win against Miami FC.

D – Frank Nodarse, Rio Grande Valley FC: The Cuban put in a stellar individual display, winning 15 of 18 duels, 5 of 6 aerial duels and 4 of 6 tackles while also making three interceptions as the Toros took a 2-1 win against Sacramento Republic FC.

M – Luka Malesevic, Rio Grande Valley FC: Malesevic scored the opening goal for the Toros in their 2-1 win against Sacramento Republic FC and won 9 of 12 duels, 3 of 4 aerial duels, and 3 of 4 tackles while making nine recoveries defensively.

M – Michee Ngalina, Colorado Springs Switchbacks FC: Ngalina had one assist, three shots and three key passes and kept FC Tulsa’s defense on its heels while completing 7 of 8 dribbles as well as winning 8 of 11 duels in Colorado Springs’ 2-0 victory at ONEOK Field.

F – Dane Kelly, Pittsburgh Riverhounds SC: Kelly moved into a tie for the league-lead with six goals this season after notching a pair of goals on three shots while also completing 9 of 11 passes in the Hounds’ 4-0 victory against Atlanta United 2.

F – Enzo Martinez, Birmingham Legion FC: Martinez recorded his first goal for Legion FC and an assist while also recording two shots and six chances created to help send the side on its way to a 2-1 win at Loudoun United FC.

F – Stefano Pinho, Indy Eleven: The Brazilian notched a goal and assist to lead Indy back from a halftime deficit to a 3-1 victory against Orange County SC on Sunday, and also won nine duels and seven aerial duels leading the attacking line for the Boys in Blue.