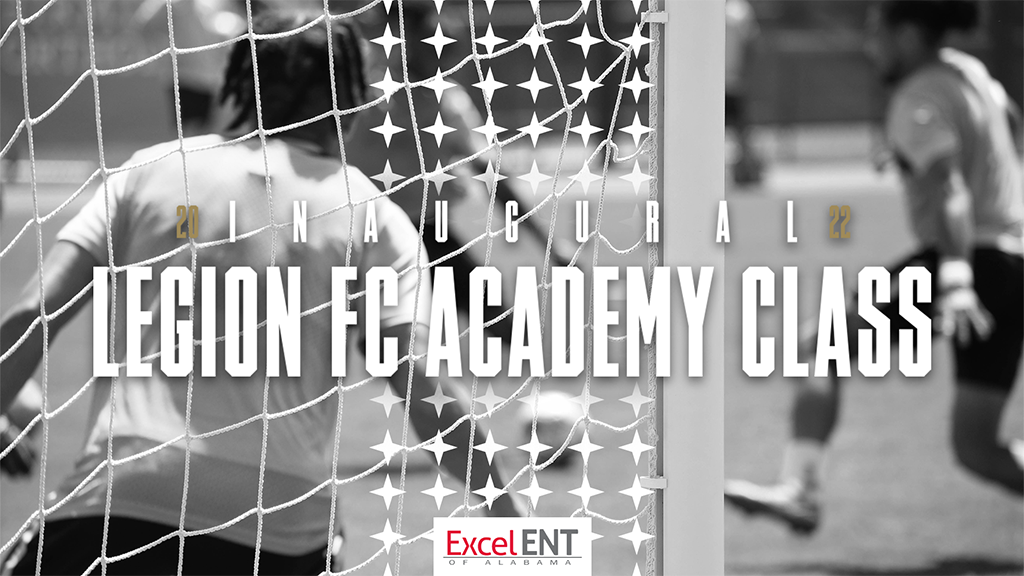 BIRMINGHAM, Ala. – Birmingham Legion FC announced on Monday a trio of USL Academy signings that mark the first players to join the club’s USL Championship roster from its inaugural academy class. Dante Johnson, Marco Garcia, and Jack Heaps have been added to the club’s roster and will be available for the club’s contest on Wednesday night against the Charleston Battery at Protective Stadium.

USL Academy contracts allow players to retain college eligibility, while also being eligible to play in the USL Championship for a club’s First Team and open a clear pathway to gaining valuable experience training with professionals.

“When we originally established our Academy in 2020, this was always the goal, to continue to develop young players in Alabama and help prepare them to take the next step in their careers, whether that be professionally or collegiately,” said Legion FC President and General Manager Jay Heaps. “There is great soccer talent in our state, and the signing of this inaugural class shows the growth and potential of the Legion FC Academy.”

All three members of the inaugural academy class have been with the Legion FC Academy since its inception in 2020 and came up through or currently play in the Birmingham United Soccer Association/Alabama FC club system.

Johnson is a part of the 2003 class and is currently finishing up his senior high school season in Georgia while preparing to play college soccer at Jacksonville University. After training with the Legion FC First Team this preseason, Johnson saw his first on-field action versus MLS powerhouse Atlanta United in February.

“Dante is a smart defensive midfielder that has great instincts and understanding of the game,” said Legion FC Academy Director and First Team Assistant Coach Eric Avila. “He is a hard-working, very active player with great passing range in possession who has really grown in his time with the First Team.”

Garcia is a Birmingham native in the ’03 class that has committed to playing collegiately at Clemson University. As a homeschooled high school student, Garcia has trained more with the Legion FC first team this spring and will continue to do so this summer upon return from a recent injury. The midfielder made his First Team debut in the 2021 preseason contest versus Atlanta.

“Marco is an attacking midfielder with a real eye for goal,” said Avila. “He makes intelligent runs getting forward and is a talented finisher. His time in Italy [with professional academy Virtus Entella] helped prepare him to step right into working comfortably with our First Team and help lead our academy.”

Heaps is a member of the 2005 class who is currently undecided on his collegiate future. He is finishing his high school soccer season at Mountain Brook High School and then will add further depth to the Legion FC First Team midfield group.

“Jack is another attack-minded midfielder with a very high soccer IQ who never looks out of his depth when playing with the first team,” said Avila. “He has excellent vision and the ability to drive the ball forward on the dribble, break down defenses, and pick out that final pass.”