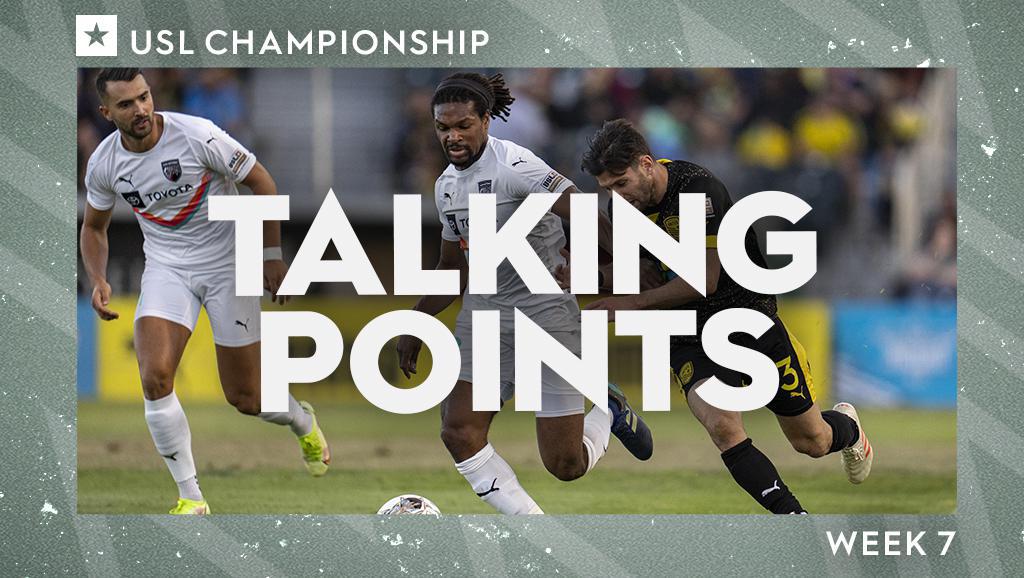 From late game-winners to established contenders putting in assured performances on the road, there was plenty to dig into this weekend in the USL Championship on the field. Here are 10 things we took away from the action as the end of the first quarter of the season began to come into view.

San Antonio FC entered its contest away to New Mexico United on Saturday night having suffered defeat in its three prior trips to Isotopes Park. It emerged victorious this time around thanks to a sharp opening to the game that set a tone that eventually paid off with Justin Dhillon’s second-half penalty kick – correctly given, with Dhillon’s right foot on the line of the penalty area.

San Antonio’s pressure, particularly on set pieces, ended up being the key factor in the result. The five biggest opportunities the side created came off set pieces, with Fabien Garcia’s header off the crossbar and the ensuing follow-up by Connor Maloney the biggest warning shot for the hosts prior to Dhillon’s penalty conversion. The way the visitors were able to impress themselves on the game in such as way as to limit United’s clear looks on goal made this arguably their most impressive performance of the season so far.

You could understand the downbeat nature of New Mexico United Head Coach Zach Prince’s comments after his side’s loss to San Antonio FC on Saturday night. It concluded the first really challenging week for his side, in which it had been denied victory by a superlative goalkeeping performance in Phoenix, knocked out of the Open Cup by the same Rising FC side, and then fallen at home before an outstanding crowd of 11,420 at Isotopes Park.

“I need to go and take some time and really internalize this,” said Prince. “I think what's important to say about the last four or five results that we've had is that the performances are there. But, when you have nothing to show for it at the end of the day, it doesn't mean anything. … I'm not feeling too positive right now. And so, I think I need to take a little bit of time and really think about the next course of action before going into Sacramento.”

This can be where the rubber meets the road for a first-time Head Coach, as Prince is, trying to figure out a solution for what ails his side. If there’s a positive, it’s that New Mexico by all indicators is the side that most believe is a playoff contender. The only thing United needs to click is the final product in the penalty area. As a whole, the group is underperforming its underlying Expected Goals numbers (10.37xG to 7 goals scored), which is how points tend to get dropped (10.62xP to eight points). Getting Chris Wehan onto the scoresheet and Neco Brett into his regular groove will fix a lot of what ails New Mexico right now, and history tells us for both players that will happen.

With the game in the balance after Detroit City FC had pulled level with Hartford Athletic on Saturday night after Deklan Wynne’s goal in the 68th minute, you couldn’t really have asked for a better conclusion from an entertainment standpoint than the show both sides put on at Trinity Health Stadium. That Detroit City came through thanks to Stephen Carroll’s stoppage time winner – putting home a rebound after Connor Rutz’s initial header had hit the post off a corner – was a major boost for the visitors, and another tough blow for the hosts, with the run of the game just not seeming to go Hartford’s way right now.

The Athletic had hit the woodwork themselves on a chance for Luka Prpa with nine minutes remaining, a finish that had it gone in would have changed the direction of the game massively. As DCFC shifts up to third place in the Eastern Conference, buoyed further by its U.S. Open Cup success against the Columbus Crew last Tuesday, it is creating its own good fortune and deserving of its current place in the league’s hierarchy.

4. Phoenix Again Shows it Ain’t Over ‘til It’s Over

There has been no team more adept at finding a way back from a deficit over the past four seasons than Phoenix Rising FC. On Saturday night in one of the weekend’s higher-profile games, it showed why once again as Luis Seijas’ outstanding late strike delivered a 2-1 victory against Miami FC for Rising FC’s first comeback win of this campaign, and its 11th since the start of the 2019 regular season.

Seijas’ goal might have been a wonder-strike, landing at No. 5 on SportsCenter’s Top 10 on Saturday night, but it delivered a reward that Phoenix had arguably deserved after putting its visitors on the back foot for almost the entirety of the final half-hour. Between the 62nd minute and a final late effort by Miami’s Speedy Williams in stoppage time, Rising FC outshot its opponent 12-0, with chances for Marcus Epps and Joey Calistri highlighting the prime opportunities for the hosts. Seijas’ strike finally delivered the three points, but the way Phoenix tilted the game in its favor was an impressive feat against a fellow contender.

While Phoenix built deliberate pressure on the way to earning its late winner, Rio Grande Valley FC got a brilliant piece of opportunism to earn what could be a very valuable victory on Saturday night against Sacramento Republic FC. Offseason arrival Jonathan Ricketts was at the center of it – bringing some Chattanooga Red Wolves FC late-game magic with him from his previous club – as he seized on a lax pass out of the back from the visitors at H-E-B Park, quickly drove up the right flank and centered, where Dylan Borczak was waiting to power home the deflected cross for a winner.

The Toros haven’t been much for late victories recently. Their most recent came on July 20, 2019 when Kyle Adams scored in the 90th minute to defeat – yes, you guessed it – Republic FC. With consecutive wins now secured, RGVFC has pulled itself into the early playoff picture again and has some confidence to go with the solid if unglamorous performances it has been putting in so far.

There are few players as respected around the USL Championship as Kenardo Forbes, whose five All-League selections in the past six years are testament to the status he’s earned as one of the league’s great figures. On Saturday night as Pittsburgh welcomed a club regular season record crowd of 5,202 fans to Highmark Stadium, the Jamaican put on another two-assist show to lead the hosts to a 4-0 victory against Atlanta United 2 that should keep the fans coming back week after week.

Forbes has now had eight multi-assist games in his career, with Saturday’s – which also saw him record five shots while setting up Dane Kelly and Russell Cicerone for finishes – putting him at 49 regular-season assists for his career. The league’s all-time leader in that category might not quite be the defensive force he was as a younger man, but he can still unlock a defense with the best of them, making him a prize asset for the title-chasing Hounds.

7. Rowdies Click Through Gears Too Late in New York

In the Tampa Bay Rowdies’ emphatic 3-1 victory against FC Tulsa in Week 6, there was an energy and power to the performance from the start that set the tone for what was to come. The Rowdies drove consistently into attack and didn’t let off the gas pedal, creating seven Big Chances as categorized by Opta on the way to a convincing victory.

So, it was a surprise this past Saturday when that intensity only seemed to come when it was time to try and salvage a result against the New York Red Bulls II, with an equalizer by Leo Fernandes with five minutes to go in the 1-1 draw leaving Tampa Bay’s late surge after Fernandes and Lucky Mkosana were introduced with 19 minutes to go coming up short. Given the success others have found against New York so far this season the Rowdies could look at this as dropped points, even on the road, but the fact that five of their six best chances of the game came after the 80th minute showed the difference a fast start can make in comparison to a big finish.

8. Indy Project Continues to Come Together

Don’t look now, but the Indy Eleven project that looked like it had a long way to go when it kicked off the season at Loudoun United FC is starting to take shape. The Boys in Blue might have grown into their contest against Orange County SC at Michael A. Carroll as they was denied a late first-half goal by an offside flag, but they hit their stride after the break in a 3-1 victory that served as the third in a row for Head Coach Mark Lowry’s side and fifth game in the league undefeated.

The play of Stefano Pinho in attack was laudable. The Brazilian might not win every ball he goes after, but he does get after it still at 31 years old, contesting 20 duels and 14 aerials, both team highs in Sunday’s contest. That proved crucial for Indy’s equalizer as he outmaneuvered OCSC’s Kobi Henry to hold in possession and set up Noah Powder, and from there the hosts pushed through with a manner of control that offered OCSC little chance to recover. Solomon Asante is on the way soon, but this Indy side is finding its way forward already.

The good news for the Charleston Battery on Saturday evening was that they ended their four-game losing streak – the club’s longest in the USL Championship era – with a 1-1 draw against Eastern Conference leader Louisville City FC. The bad news was the club still doesn’t seem to have an ability to control games that is going to result in long-term success. Charleston logged only a 50.4 percent passing accuracy rate, which dropped the further the side got up the field, as it attempted more final-third entries than Louisville (83-70) but had only two-thirds the number of touches in the opposing penalty area (20-33).

The Battery could count themselves a little fortunate, too. Had Wilson Harris’ shot in the 79th minute found the net for LouCity instead of ringing the left post, it would have been hard to see a way back for a side that hasn’t scored more than one goal in a game yet this season. The direct, attacking play which Charleston is looking to deliver under Head Coach Conor Casey could be an entertaining choice. So far, it’s not coming off in the desired manner, and might need a more patience and control to execute more effectively.

After the night in front of goal Birmingham Legion FC had against Detroit City FC the prior weekend, the frustration the first half against Loudoun United FC provided on Sunday afternoon even had the club’s social media admin wondering when it was going to end.

yeah, definitely would've broken the controller on this one. pic.twitter.com/EzMVq4zOJg

Thankfully for the visitors, the breakthrough eventually came, although not before a saved penalty kick that could have ratcheted up the doubt. Enzo Martinez’s first goal for Legion FC, added to by a late assist on Macky Diop’s insurance goal, provided the breakthrough both the veteran playmaker and club had been waiting for since his offseason arrival. It’s still not quite all clicking into gear yet, but the 2-1 win the side earned should provide a boost in morale ahead of Wednesday’s visit from Charleston to open a two-game homestand.