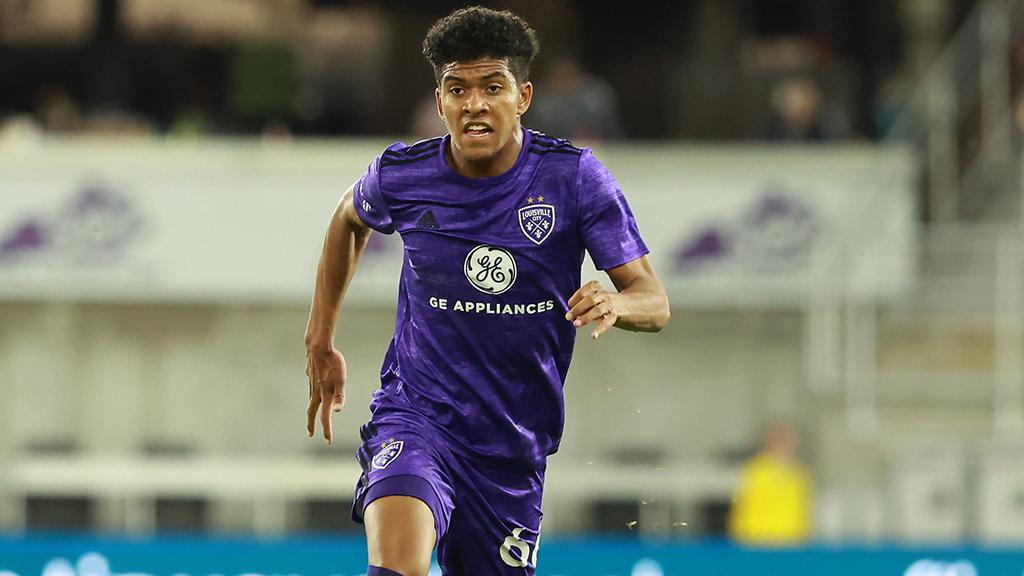 16-year-old Louisville City FC Academy product Josh Wynder has been called up to the United States U-19 Men's National Team for its camp in California that opens on Friday. | Photo courtesy Em-Dash Photography / Louisville City FC

LOUISVILLE, Ky. – Louisville City FC standout Josh Wynder has been named to the United States U-19 Men’s National Team squad that will convene in Carson, Calif. on Friday under new Head Coach Marko Mitrovic. The call-up marks the 16-year-old’s first to the U.S. Youth National Team program after a strong start to his first full season in the professional ranks this year in the USL Championship.

A center back who progressed through the LouCity Academy, Wynder has made six regular season starts in LouCity’s seven-game undefeated streak to start the 2022 Championship regular season. On Wednesday night delivered the game-winning penalty kick in LouCity’s Lamar Hunt U.S. Open Cup victory against St. Louis CITY 2 at Lynn Family Stadium, sending the side into the Round of 32.

.@WynderJoshua, the hometown kid, for the win.

The man of the moment pic.twitter.com/Iy9QCeP8ox

“I’m excited to get the chance to prove myself with players around my age,” said Wynder. “The opportunity to represent my country will be a great experience and a big step in my career. I look forward to making Louisville proud.”

Wynder is the second LouCity prospect to receive a national team call up in the past year. Former LouCity player Jonathan Gomez – who earned 2021 USL Championship Young Player of the Year honors before his offseason transfer to La Liga’s Real Sociedad – became the first Championship player to appear for the U.S. Men’s National Team last December when he made his senior international debut against Bosnia and Herzegovina.

The younger of two brothers currently signed to professional contracts at LouCity, with 18-year-old brother Elijah currently on loan at USL League One club FC Tucson, Wynder originally joined the club’s First Team as a USL Academy signing in February 2021 before inking a professional contract four months later. The 6-foot-3 center back made 11 appearances last season for LouCity as the club advanced to the Eastern Conference Final of the USL Championship Playoffs for a seventh consecutive season. His play then and this preseason set the stage for the larger role he is currently playing, with Wynder sitting seventh on the team in minutes (515) in league action while recording 11 interceptions, 12 clearances and a team-high five blocked shots.

“We are thrilled to see Josh rewarded for his strong start to this season,” said LouCity Head Coach Danny Cruz. “He is a humble young man with a bright future, and we are excited about this opportunity for him. While he will miss a few important games for us, we feel it is invaluable that he arrives at this camp fresh and ready to compete. I am looking forward to monitoring his progress in California and cannot wait to have him back with the group.”