TAMPA, Fla. – The USL Championship announced the Team of the Week for Week 5 of the 2022 regular season on Tuesday, with Pittsburgh Riverhounds SC forward Albert Dikwa voted the Championship Player of the Week presented by Konami eFootball as his two goal, one assist performance led the Hounds to a thrilling 4-3 victory against FC Tulsa on Saturday afternoon at ONEOK Field.

Now in his third season with the Hounds, Dikwa is having a breakout campaign with his four goals having already surpassed his prior single season high. On Saturday, he opened the scoring for the Hounds in the sixth minute before adding an assist on Alex Dixon’s goal eight minutes later to give the hosts an early two-goal lead. Dikwa added a second goal just before the hour-mark for the first two-goal performance of his career as the Hounds ended Tulsa’s six-game winning streak in all competitions at ONEOK Field and continued their own undefeated start to the season.

Dikwa earned 40 percent of the ballot to claim the award. San Antonio FC goalkeeper Jordan Farr finished second on 33 percent after recording a six-save shutout in a 1-0 victory on the road against defending USL Championship title holder Orange County SC on Saturday night. 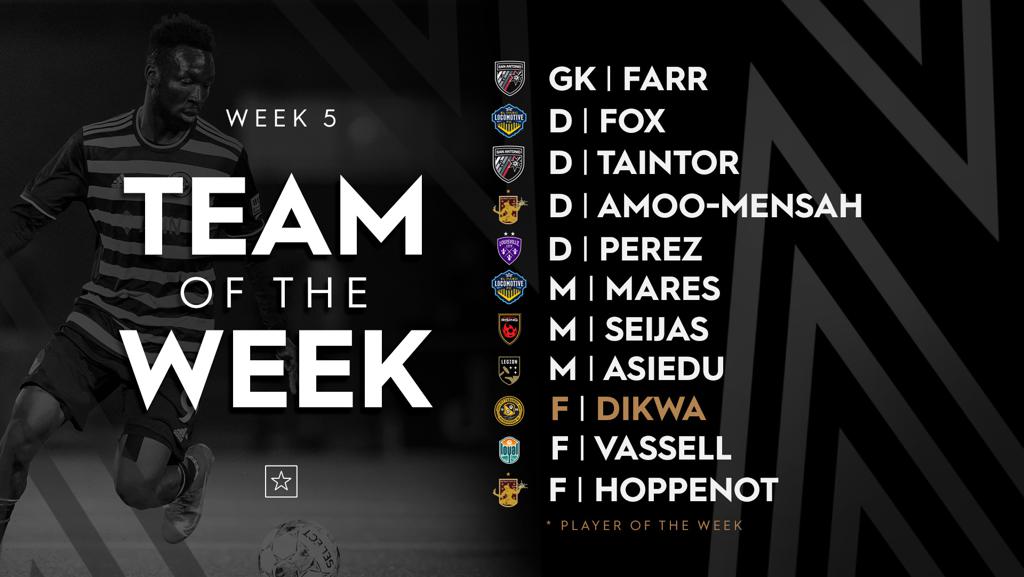 D – Manny Perez, Louisville City FC: Perez had a standout defensive display as LouCity limited Loudoun United FC to only two shots in a 2-0 victory on Sunday, winning 6 of 8 duels and 2 of 2 tackles while making 15 recoveries for the visitors at Segra Field.

M – Luis Seijas, Phoenix Rising FC: The Venezuelan midfielder scored a pair of first-half goals and had three shots and one key pass while completing 30 of 36 passes overall in Phoenix’s 3-1 victory against the LA Galaxy II.

M – Anderson Asiedu, Birmingham Legion FC: Asiedu scored a stoppage-time game-winner to lift Legion FC to its first league win of the season against Hartford Athletic, capping a performance in which he had five shots and three chances created, completed 46 of 51 passes and made 10 recoveries.

F – Kyle Vassell, San Diego Loyal SC: Vassell delivered his first two-goal performance for SD Loyal and had four shots overall while completing 17 of 22 passes in his side’s 4-1 victory against the Charleston Battery.