TAMPA, Fla. – The USL Championship announced the Team of the Week for Week 4 of the 2022 regular season on Tuesday, with Las Vegas Lights FC forward Danny Trejo voted the Championship Player of the Week presented by Konami eFootball for the second time this campaign after his two-goal performance led Lights FC to a 2-1 victory against the Charleston Battery last Friday night at Patriots Point.

In his second season in the professional ranks, Trejo has jumped out to a fast start to the season with a league-leading five goals in Lights FC’s opening five contests. The Mexican forward – who claimed Player of the Week honors in Week 2 after leading Las Vegas’ victory against Phoenix Rising FC – notched his second two-goal outing of the season in Charleston with a goal in either half that brought the visitors back from an early deficit to take victory. Trejo has now surpassed his goal total from the 2021 campaign, combining impressively with fellow forward Cal Jennings to lead Lights FC’s attack.

Trejo earned 42 percent of the ballot to claim the award. Pittsburgh Riverhounds SC forward Dane Kelly finished second on 26 percent after coming off the bench to score both goals in the Hounds’ 2-0 victory against Loudoun United FC on Saturday night at Highmark Stadium. 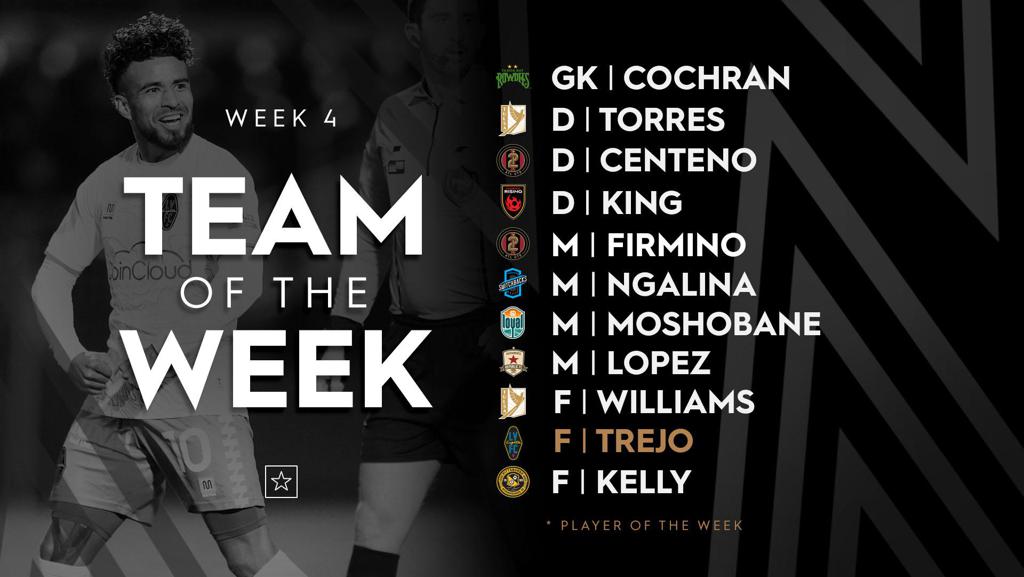 GK – CJ Cochran, Tampa Bay Rowdies: Cochran put in a standout display to preserve the Rowdies’ undefeated record with a four-save shutout in a 0-0 draw against Oakland Roots SC that included a pair of crucial close-range stops.

D – Gabriel Torres, FC Tulsa: Torres continued his strong campaign after his offseason arrival in Tulsa with one goal and three chances created in his side’s 3-2 win against the New York Red Bulls II, while also completing 50 of 63 passes and recording three interceptions and nine recoveries.

D – Darnell King, Phoenix Rising FC: King led by example in Phoenix’s 2-0 victory against San Antonio FC, winning 10 of 14 duels and 3 of 3 tackles defensively while completing 3 of 4 dribbles and recording two shots and one key pass in attack.

M – Nicolas Firmino, Atlanta United 2: Firmino scored both goals as Atlanta took a 2-1 victory on the road against Hartford Athletic, and the midfielder also won 5 of 5 aerial duels while completing 37 of 52 passes overall.

M – Michee Ngalina, Colorado Springs Switchbacks FC: The Congolese winger recorded a goal and assist as the Switchbacks continued their perfect start in a 2-1 win against Miami FC, and finished the game with three shots and three chances created while completing 31 of 37 passes.

F – JJ Williams, FC Tulsa: Williams recorded a pair of goals, had eight shots overall – including four on target – and two key passes, as Tulsa took a 3-2 victory against the New York Red Bulls II to remain perfect at ONEOK Field this season.

F – Danny Trejo, Las Vegas Lights FC: Trejo earned his third consecutive Team of the Week selection after recording both goals as Lights FC took a 2-1 win on the road against the Charleston Battery while also completing 25 of 30 passes and one key pass.

F – Dane Kelly, Pittsburgh Riverhounds SC: Kelly had a key impact after coming on as a second-half substitute, recording both goals as the Hounds handed Loudoun United FC its first loss of the season.