TAMPA, Fla. – The USL Championship announced the Team of the Week for Week 3 of the 2022 regular season on Tuesday, with Atlanta United 2 forward Jackson Conway voted the Championship Player of the Week presented by Konami eFootball after recording the first hat trick of the campaign, and the 100th hat trick in the Championship’s regular season history, in a 4-1 victory against the Charleston Battery on Sunday night that earned Atlanta its first win of the season.

Conway has started in each of Atlanta’s opening four games of the campaign and broke the side’s early scoring drought 11 minutes into the second half of its clash with the Battery at Fifth Third Bank Stadium to bring the hosts level. The 20-year-old went on to add another pair of goals in the 63rd and 78th minutes to record the fourth hat trick in Atlanta United 2’s history before adding an assist on Darwin Matheus’ late finish to cap the scoring. Conway became the 13th player to record at least three goals and one assist in a single game in the league’s history with his performance.

Conway earned 73 percent of the ballot to claim the award. Week 2 Player of the Week Danny Trejo of Las Vegas Lights FC finished second with 20 percent after a second consecutive standout display that saw him record two goals and two assists in Las Vegas’ 5-4 victory on Wednesday night against El Paso Locomotive FC. 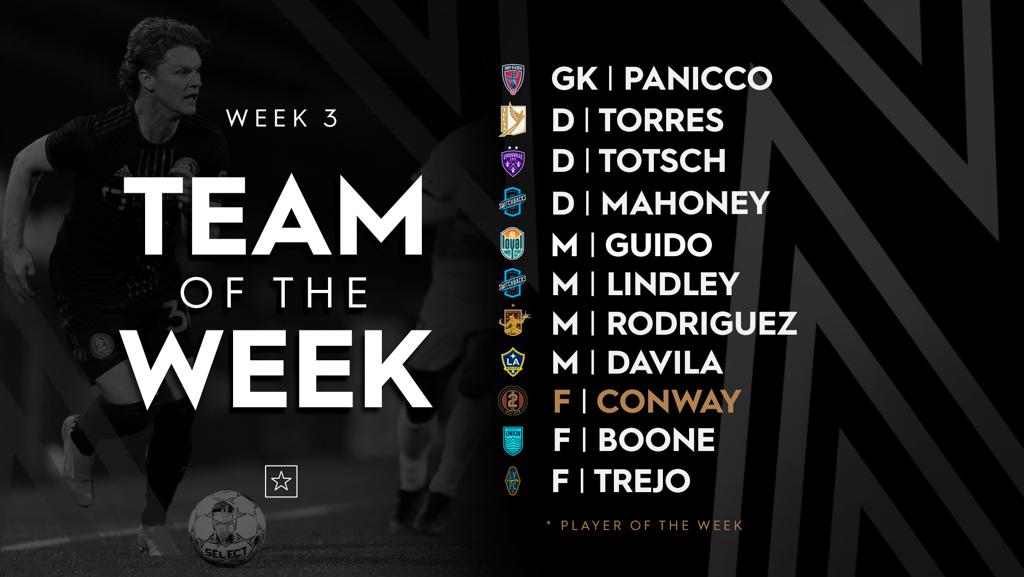 D – Gabriel Torres, FC Tulsa: Torres recorded the assist on Tulsa’s game-winning goal against San Diego Loyal SC on Wednesday night, and over the week won 15 of 27 duels, made nine interceptions and 10 clearances across two games.

D – Matt Mahoney, Colorado Springs Switchbacks FC: Mahoney played a key role in Colorado Springs recording a second consecutive shutout, winning 7 of 9 duels and making 13 recoveries while completing 43 of 54 passes in a 2-0 win on the road at Birmingham Legion FC.

M – Alejandro Guido, San Diego Loyal SC: The San Diego native scored the decisive goal in SD Loyal’s 3-2 win on the road at Phoenix Rising FC and had a big midfield performance overall completing 61 of 72 passes and winning 12 of 15 duels.

M – Maxi Rodriguez, Detroit City FC: Rodriguez played a decisive role in turning the game in DCFC’s favor in the second half of a 1-1 draw with Pittsburgh Riverhounds SC on Saturday, scoring from the penalty spot in addition to completing 49 of 61 passes and winning 12 of 15 duels.

F – Jackson Conway, Atlanta United 2: Conway recorded the first hat trick of the 2022 Championship season and notched an assist in Atlanta’s 4-1 victory against the Charleston Battery on Sunday night, and in turn recorded the 100th hat trick in the Championship’s regular season.