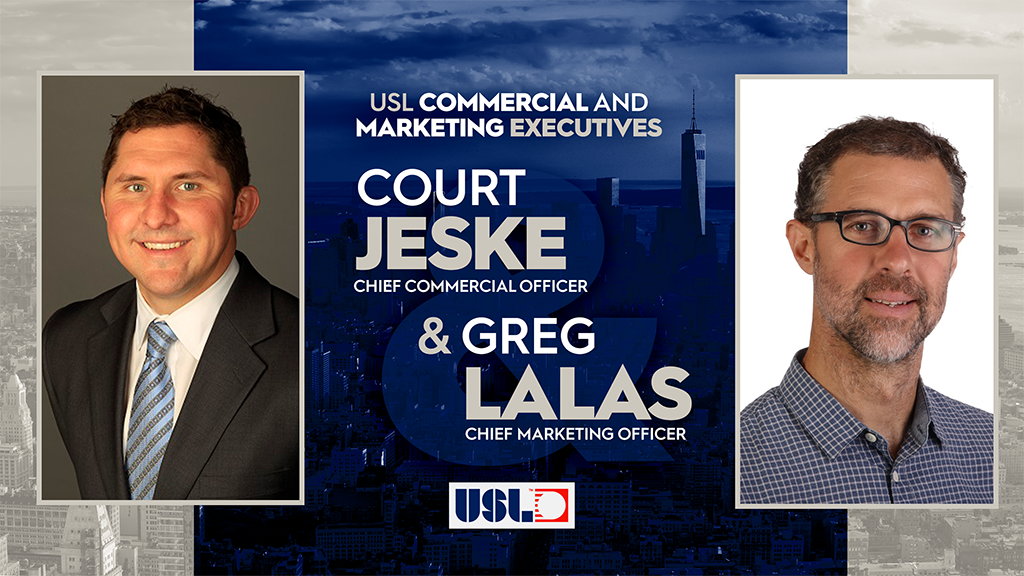 TAMPA, Fla. – Following on the establishment of a New York-based Broadcast and Media group, the USL announced today additional moves to bolster its executive leadership and reinforce its business presence in New York. Court Jeske has been named Chief Commercial Officer, expanding his previous role in leading the league’s business development and partnerships. Veteran soccer marketing executive Greg Lalas has joined to lead the league’s marketing and communications efforts as the USL’s first Chief Marketing Officer.

“Acquiring top executive talent in these areas is both a testament to our potential and an indication of our ambition,” said USL CEO Alec Papadakis. “Establishing a strong presence in New York is a signal to the sports industry and the business community that the USL has entered a new phase of strategic growth. We are very bullish on the future of our sport and our organization.”

Now in his fourth year with the USL, Jeske has previously helped the USL secure partnerships and renewals with globally prominent brands such as ESPN, SportFive, SiriusXM, Puma, and Konami. His elevation to Chief Commercial Officer will see him spearhead and expand the company’s internal and outward-facing commercial endeavors.

“Over the past three years, Court has contributed greatly to elevating USL Team Services and Commercial departments,” Papadakis said. “With his keen business acumen, he has played a major role in USL’s evolution during his tenure. Now, as we look to the future, Court as Chief Commercial Officer will be responsible for developing a sound commercial strategy that will serve as the engine behind our professional leagues’ continued maturation and growth.”

“I’m honored to lead the effort to align our business units and promote growth for our clubs and the league,” Jeske said. “We have made tremendous strides in recent years, and the commercial marketplace is recognizing that the new brand of USL soccer has arrived.”

Lalas, a former professional player, will oversee the league’s marketing efforts, including communications, digital, content, brand, consumer data, and fan engagement. With more than two decades of experience in content marketing and sports journalism, Lalas previously served as Vice President of Content at Major League Soccer, where he oversaw the league’s digital channels and content creation. Lalas’s other positions in the soccer space include former Site Director of Goal.com USA and cofounder of the Kicking + Screening Soccer Film Festival.

“The USL is very fortunate to add Greg to its senior management team,” Papadakis said. “He is an accomplished soccer executive who has distinguished himself both on the field as a college and professional player and off the field with 15 years of experience in marketing professional soccer. In his role as Chief Marketing Officer, Greg’s transformational and authentic talent will help us develop a comprehensive marketing strategy to drive performance across all levels of our league and clubs moving forward.”

“The USL’s vibrant supporter culture, design-forward brands, and unique youth-to-pro pathway make it one of the coolest and most compelling soccer organizations in the world,” Lalas said. “With the FIFA World Cup coming in 2026, we have a tremendous opportunity ahead of us to build meaningful connections with hundreds of communities across the United States. I’m thrilled to have the chance to help drive the sport forward through the stories of our players, fans, and clubs, and through innovative engagement strategies that will continue to electrify the brand’s promise.”