TAMPA, Fla. – The USL Championship announced the Team of the Week for Week 1 of the 2022 regular season on Tuesday, with Pittsburgh Riverhounds SC forward Dane Kelly voted the Championship Player of the Week presented by Konami eFootball after recording his 100th regular season goal in his debut for the Hounds, a 3-0 victory against Memphis 901 FC on Saturday night at AutoZone Park.

Already the Championship’s all-time leading goalscorer, Kelly became the first player to reach 100 regular season goals in league history as he opened the scoring in first-half stoppage time for the Hounds. The Jamaican forward also notched a second-half assist as Pittsburgh earned the lone away victory of the opening weekend of the regular season in Kelly’s 229th regular season appearance in the league.

Kelly earned 56 percent of the ballot to claim the award. Miami FC defender Mark Segbers finished second on 31 percent after also notching a goal and assist in his debut for the South Florida club in a 2-0 win against the New York Red Bulls II on Saturday night at FIU Stadium. 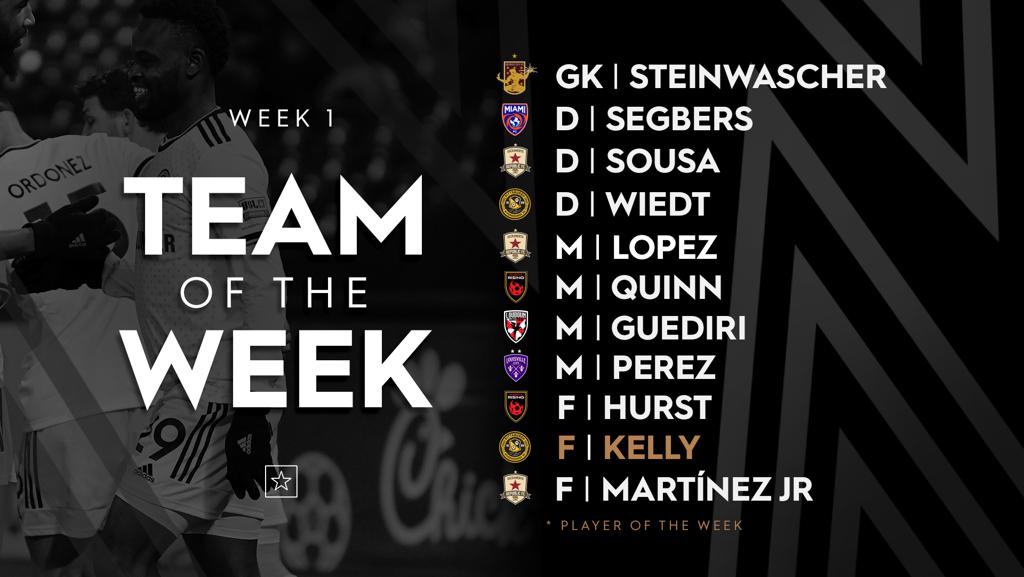 D – Mark Segbers, Miami FC: Segbers had an ideal debut for his new club as he recorded one goal and one assist and won 14 of 20 duels and 4 of 5 tackles in Miami’s 2-0 win against the New York Red Bulls II.

D – Shane Wiedt, Pittsburgh Riverhounds SC: Wiedt had a dominant defensive performance for the Hounds, recording 11 interceptions and winning 8 of 10 duels in his side’s 3-0 victory against Memphis 901 FC.

M – Rodrigo Lopez, Sacramento Republic FC: Lopez guided a comeback 3-1 victory for the hosts, scoring from the penalty spot in addition to winning 9 of 13 duels and completing 25 of 34 passes against El Paso Locomotive FC.

M – Manny Perez, Louisville City FC: Perez delivered a stellar debut for LouCity on the right side, completing 6 of 8 dribbles and winning 11 of 14 duels while recording 11 recoveries defensively in the side’s 1-0 win against Atlanta United 2.

F – Greg Hurst, Phoenix Rising FC: Hurst had a goal and assist in his debut for Rising FC and recorded two shots and three chances created overall while completing 2 of 2 dribbles and 10 of 14 passes in Phoenix’s 4-2 victory against Monterey Bay F.C.

F – Dane Kelly, Pittsburgh Riverhounds SC: Kelly recorded his landmark 100th regular season goal in the Championship and notched an assist as the Hounds took a 3-0 victory against Memphis 901 FC.

F – Douglas Martínez Jr., Sacramento Republic FC: Martinez notched a goal and assist on his debut for Republic FC, scoring the winner in a 3-1 victory against El Paso Locomotive FC with six minutes to go.