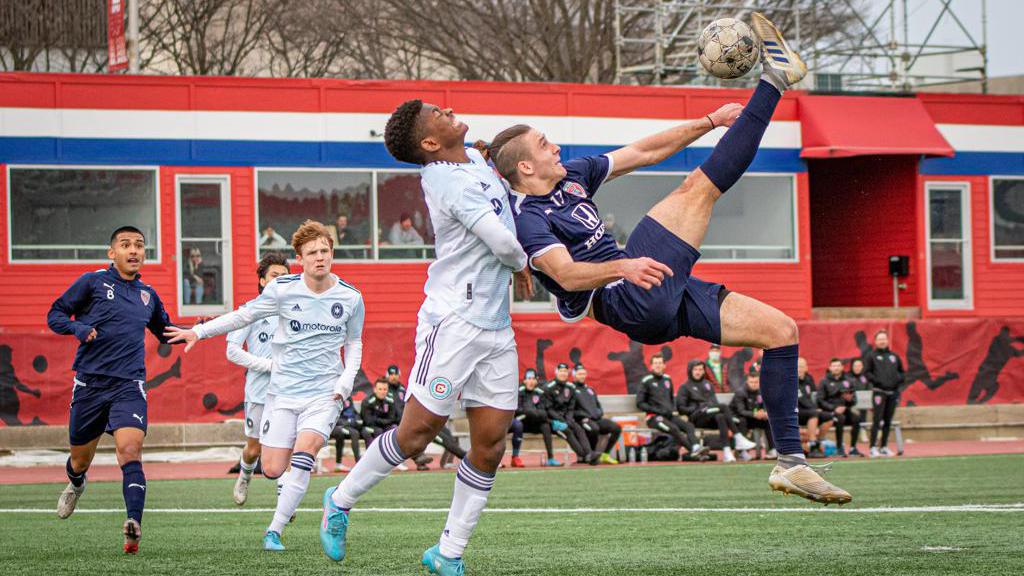 INDIANAPOLIS – Aris Briggs recorded a goal and assist as Indy Eleven rallied to take a 2-1 victory against Major League Soccer’s Chicago Fire FC on Friday afternoon in its penultimate game of the 2022 preseason at Michael A. Carroll Stadium.

After a quiet opening, the Fire threatened first in the 12th minute off a corner kick that saw Indy’s Neveal Hackshaw made a pivotal challenge to deflect the close-range chance up and over the crossbar. A minute later, however, the visitors took the lead when an attacker beat an Indy defender and converted on an uncontested shot from just inside the top of the penalty area.

Chicago continued to carry the better chances through about the first half-hour, but Indy goalkeeper Tim Trilk made three important first half stops – including two on 1-on-1 chances – to keep it a one-goal game. The Boys in Blue gradually found their feet in the attacking third as well, with a guest forward creating the side’s first real chance in the 25th minute and a shot of his own that was blocked seven minutes later. Another opportunity fell to the foot of Indy midfielder Justin Ingram eight minutes before halftime, but he was unable to convert.

The hosts threatened again three minutes into the second half when midfielder Raul Aguilera’s pass toward into the right channel for Hackshaw saw the Trinidad and Tobago international shoot into the near side-netting from a narrow angle. Indy found the net in the in the 51st minute, however, as recently signed Academy player Palmer Ault deftly chested down a ball at the top of the penalty area into the path of Briggs, who took a touch before finishing from 15 yards.

Briggs continued to create scoring chances for the home side with back-to-back chances around the hour-mark, the first a header that was saved before he attempted a bicycle kick that went inches wide. While Ault’s brief appearance in the match as a halftime substitute ended in the 72nd minute, he nearly left another good impression with his final action of the day with a shot from eight yards that was saved.

Ault’s replacement delivered what proved to be the winner, with the guest forward scoring in the 84th minute. After collecting Briggs’ flick-on in midfield, the striker carried possession for 20 yards up the middle of the field before delivering from near the penalty spot to put the hosts ahead. Indy then withstood late pressure by the Fire, including a barrage of crosses into the penalty area, to earn its fourth win of the preseason.