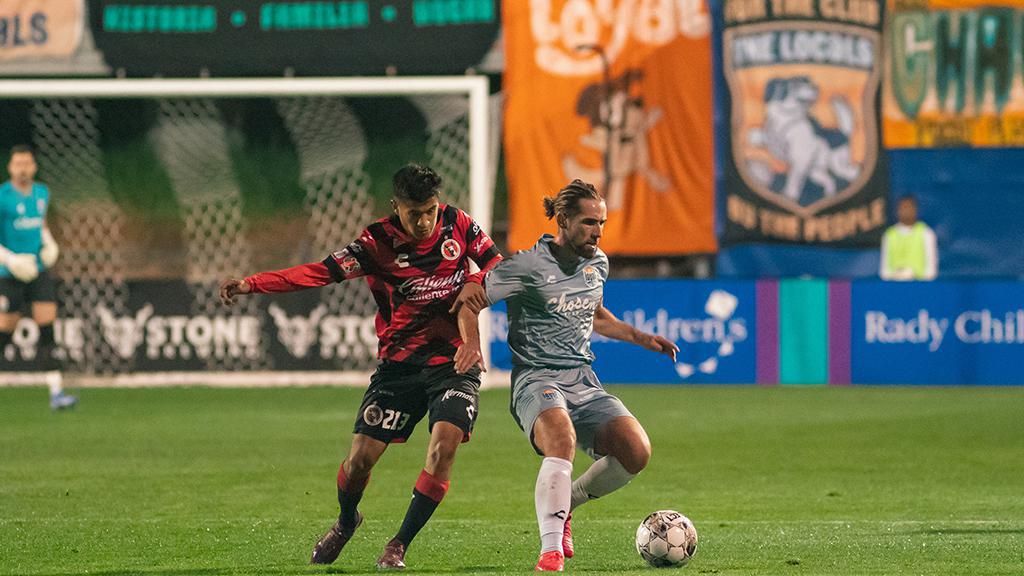 SAN DIEGO – Alejandro Guido, Tumi Moshobane and Grant Stoneman were on target as San Diego Loyal SC took a 3-2 victory against Club Tijuana Xolos in a preseason exhibition before more than 4,500 fans at Torero Stadium on Saturday night in the second edition of the Clasico Sin Fronteras, bringing together the USL Championship and Liga MX squads.

The festive crowd was provided an entertaining contest that saw SD Loyal open the scoring in just the third minute. Moshobane provided the goal, sending a low finish off the left post and just over the goal line.

Guido then struck against one of his former clubs as the San Diego native doubled the lead for the hosts in the 19th minute. After seeing his initial volley partially saved by Club Tijuana goalkeeper Benny Diaz, the attempt to clear off the line by a Xolos defender went right back to Guido, who finished powerfully after getting a second chance.

The visitors had of their own when Daniel Lopez fired a shot from outside the penalty area, but SD Loyal goalkeeper Koke Vegas dove to make the save, but the pressure from Xolos eventually told in the 29th minute when Christian Lopez was brought down in the penalty area. Vegas got a hand to Daniel Lopez’s penalty kick but couldn’t keep out the effort to the bottom-left corner.

Six minutes later, however, SD Loyal restored its two-goal lead as Stoneman got on the end of a cross sent to the six-yard box by Charlie Adams and headed past Diaz for a 3-1 lead.

Both teams played their starters into the second half with constant moving of the ball to both ends of the pitch, and the hosts twice nearly added to their lead on a pair of counterattacks that saw Kyle Vassell and Adams both test Diaz.

SD Loyal’s Vegas also had a handful of saves of his own before he was relieved by substitute Austin Guerrero 77 minutes into the match. Club Tijuana’s Ruben Hernandez beat Guerrero with an 85th minute goal to make it a one-goal game again, but the hosts held on for victory, reversing the result from when the sides had met last July.