Arteaga, Pinho, Law on target to continue undefeated preseason for Boys in Blue 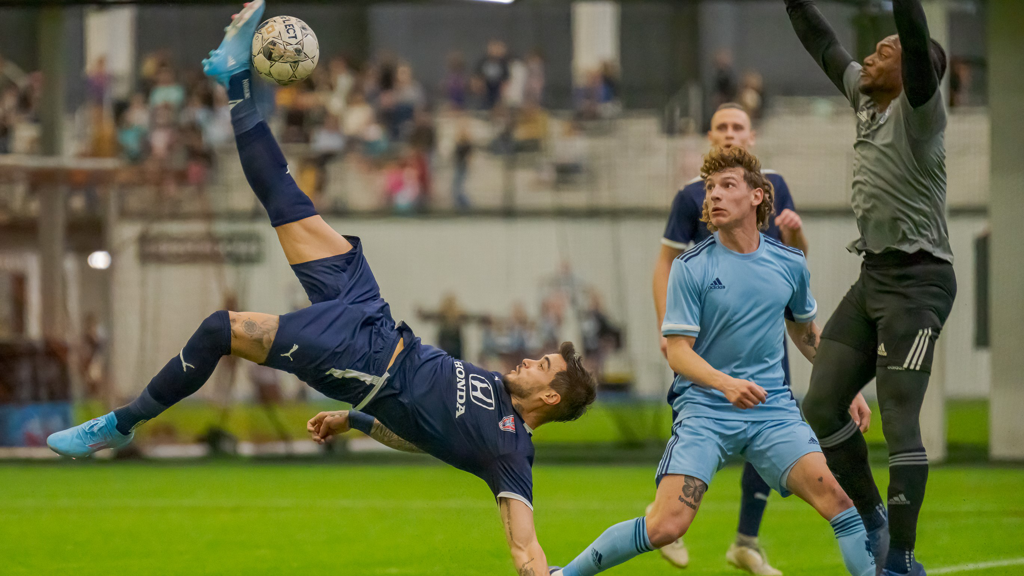 WESTFIELD, Ind. – Stefano Pinho, Manuel Arteaga and Nicky Law all found the net as Indy Eleven defeated MLS NEXT Pro side Sporting Kansas City II 3-0 in a preseason exhibition on Saturday afternoon at the Grand Park Events Center, moving the Boys in Blue to a 3-0-1 mark so far this preseason.

The hosts opened the gam patiently, looking establish possession and tempo, and the first chance didn’t arrive until the 11th minute when A.J. Cochran nearly headed in a free kick by Law. A second chance arrived 10 minutes later when Raul Aguilera delivered a back-flick to free defender Noah Powder for an overlapping down the left flank, from where his cross towards the penalty spot was almost headed in by forward Aris Briggs.

The Boys in Blue found the breakthrough in the 22nd minute, however, when Alex McQueen nutmegged his defender following a turnover, setting up a close-range finish for Pinho from the top of the six-yard area. The only notable scoring chance for the remainder of the half came in the 42nd minute off a cleared corner kick that ended with Indy midfielder Justin Ingram firing high, but it would not take very long for the Boys in Blue to get on the board in the second half. Arteaga notched his team-high fifth goal of the preseason in the 48th minute, finishing low off a fine chipped feed from Law into the right side of the penalty area.

SKC II created a couple of chances on corner kicks in the following 15 minutes – including an effort from 20 yards out that rang the crossbar – but to no avail. Indy Head Coach Mark Lowry made a flurry of substitutions in the 61st minute, putting four sets of fresh legs out on the pitch, and in the 73rd minute the hosts sprang into attack again when a guest midfielder trapped a high pass with his shoulder to himself inside the area before turning and sending a volley just over from 10 yards.

With 11 minutes to go, Indy produced an even more audacious attempt, as Jared Timmer delivered a pass to the top of the six-yard area that Arteaga popped up to himself before connecting on a bicycle kick, only to see a brave save by the onrushing SKCII goalkeeper stop the highlight reel chance. Indy wrapped up its victory with three minutes to go, however, as Law converted from 15 yards out after a cross by Powder was half-cleared to the English midfielder.