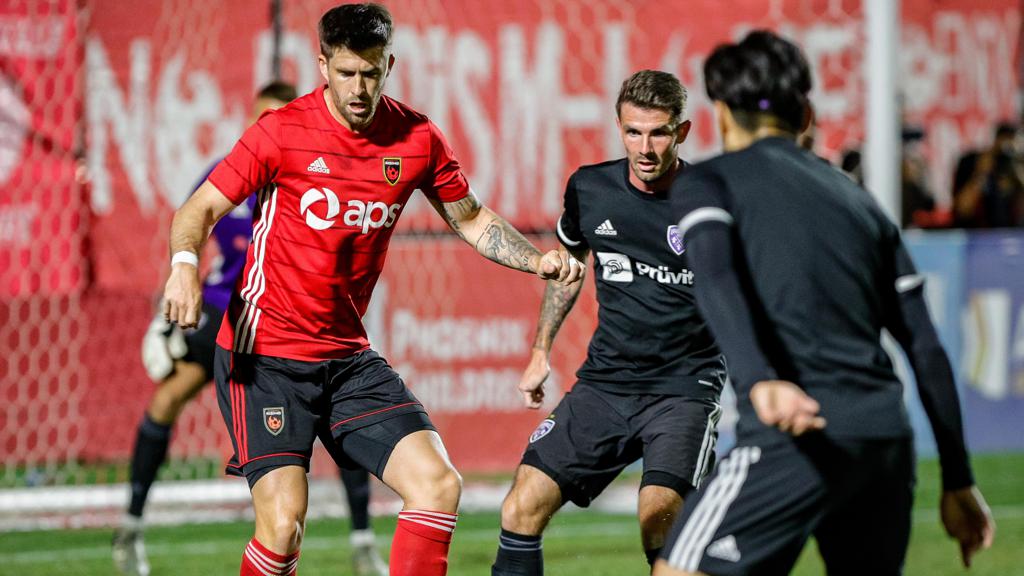 PHOENIX – Phoenix Rising FC and Louisville City FC both held leads but settled for a 2-2 draw as the sides met on Saturday night at Wild Horse Pass in a preseason meeting between two of the USL Championship’s perennial title contenders.

Santi Moar nearly gave Rising FC an early lead when he received a pass on the left flank and moved across the top of the penalty area before cutting a shot back toward the near post that flashed just wide. The hosts took the lead in the 17th minute, however, after Marcus Epps beat a pair of defenders on the left side and cracked a low cross through the heart of the penalty area for Darnell King. The right back arrived at the perfect time, hitting a first-time shot beyond the reach of LouCity goalkeeper Kyle Morton.

Louisville found an equalizer with the final chance for the first half, however, when Niall McCabe found Paolo DelPiccolo on an in-swinging corner kick that the LouCity captain headed home. The visitors then took the lead nine minutes into the second half as a low shot by Brian Ownby was parried by Phoenix goalkeeper Ben Lundt but only to the feet of Wilson Harris, who tucked home the rebound, capping a good spell of pressure.

Both sides made wholesale changes around the hour-mark, and two of Phoenix’s new faces combined shortly after their introduction to level the game again. A free kick by Luis Seijas curled to the near post, where Joey Calistri flicked a header backwards, beyond the reach of the goalkeeper and into the side-netting.

“An excellent game against a very good opponent with fans,” said LouCity Head Coach Danny Cruz. “It felt real, which was excellent for the players. I think when you look at the result, it was a fair result – a lot of opportunities both ways. So certainly, some things we need to continue to improve on, but overall, I’m really proud of the group on this trip.”