Indy, Detroit end all square after early goals; Hounds pull away against Loudoun for victory 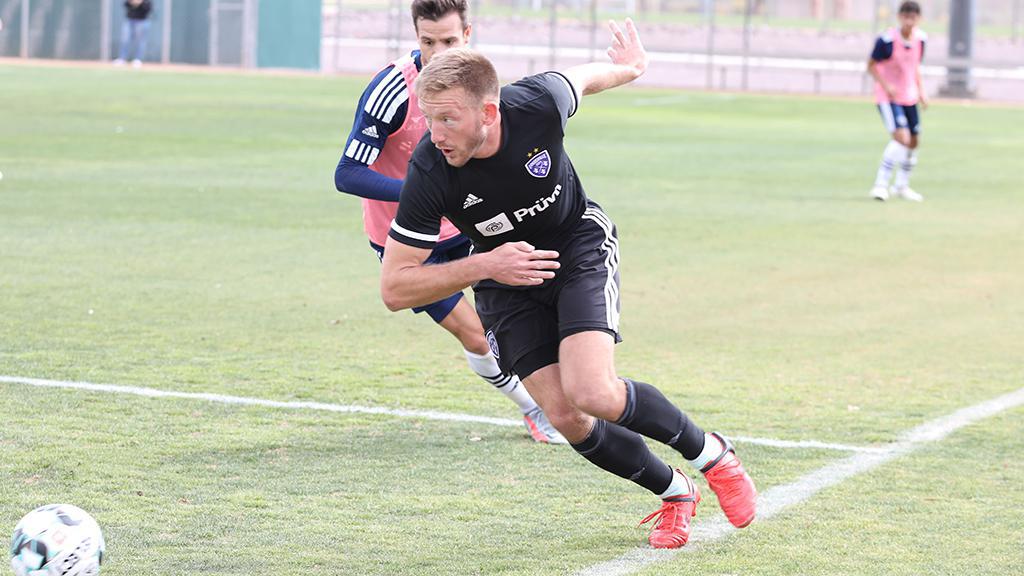 “We couldn't ask for a better preseason game,” said LouCity Head Coach Danny Cruz. “It was a good exercise for the group. They presented some problems that we know we're going to have to look at and continue to look for solutions. But ultimately, we speak to the group a lot about wanting to win in everything we do, so I'm really happy with the result.”

Lancaster opened the scoring in the 24th minute, making the most of LouCity newcomer Ray Serrano’s dash up the left side. It resulted in a tap in from close range.

The clubs then exchanged goals just before the halftime whistle. At one end, Lancaster banged a free kick off the crossbar and in. At the other, LouCity goalkeeper Kyle Morton denied a penalty kick by El Paso’s Luis Solignac before Locomotive FC’s Nick Hinds converted the rebound.

El Paso knotted the score with a quick goal to open the second half, but it was all LouCity after Cruz swapped most of his lineup two-thirds into proceedings. Louisville’s Brian Ownby caught Locomotive FC’s goalkeeper off his line for a 64th minute goal, and Gonzalez quickly followed with his first tally, a header off a corner kick by Oscar Jimenez. Gonzalez added another goal in the 72nd minute on an assist from Corben Bone.

“Jorge did an excellent job of getting in the box on his goals. Cam had two really, really good goals,” Cruz said. "When you look at where the goals come from, we had wide attacking play. ... The entire group did an excellent job from front to back. I'm glad we scored the goals that we did. We'll certainly address with the group conceding a penalty before halftime – don't want to see that – but room to grow for sure.”

INDY ELEVEN 1, DETROIT CITY FC 1: Both sides scored inside the opening 10 minutes as Indy Eleven and Detroit City FC ended all square at the Grand Park Events Center. Connor Rutz opened the scoring for DCFC in the fourth minute before Stefano Pinho leveled from the penalty spot three minutes later.

Rutz’s goal came from a dead ball opportunity, sending a free kick from 20 yards past Indy goalkeeper Tim Trilk to his upper-left corner. The DCFC lead was short lived, however, as Indy midfielder Raul Aguilera’s shot from just outside the area in the sixth minute was handed down by DCFC defender Rhys Williams to draw the point to the spot. Pinho made easy work of the penalty, sending Detroit goalkeeper Nate Steinwascher the opposite way before converting low to the right for his second goal of the preseason.

Detroit looked to go back in front just after the quarter-hour through Pato Botello Faz’s headed finish off a cross by Rutz, but the latter failed to strike his pass before the ball fully crossed the goal line, negating the chance for the visitors. DCFC had the last best chance of the opening half hour in the 28th minute when Antoine Hoppenot latched onto a loose ball inside the six-yard area, only to see Trilk pounce on the deflected effort to keep things even after the first of three 30-minute periods.

The middle period started with the Eleven holding the bulk of possession but with no quality chances on goal to show for it. Instead, it was DCFC getting a set piece chance against the run of play in the 42nd minute, but Stephen Carroll’s header off Rutz’s delivery was pushed well high. Three minutes later it was Botello Faz looking to counter with a cheeky chip from midfield, only for his effort to drift wide.

Indy Eleven Head Coach Mark Lowry inserted eight new players to start the final 30-minute period, with only Law, Arteaga, and defender Mechack Jerome serving as carryovers from the initial starting lineup. Indy’s guest goalkeeper stepped up big in the 71st minute, making a kick save in traffic on a shot from 12 yards before Arteaga almost struck with 15 minutes to go, only for his shot from 20 yards to be steered wide by a low, diving save. The 80th minute saw a narrow-angle shot by one of Detroit’s trialist attackers from the left side of the area flash through the six and past the far post.

The Boys in Blue collected the game’s final chances of note in the dying moments. In the 89th minute, an Indy guest midfielder saw his shot off a short corner curl just over the bar from 15 yards, followed by a guest forward pushing his effort from the right side of the area just wide. One final set piece in the 90th minute from 30 yards straight out from goal saw Arteaga put his first shot into the wall, and his rebound attempt to follow was snuffed out by traffic at the top of the area, seeing out the contest.

Borso netted his second goal in as many games to open the scoring in the 24th minute. The 17-year-old forward received a diagonal ball forward on the right wing, and he placed the ball around the charging goalkeeper with his first touch.

The Hounds had other good chances in the first half, including two efforts that struck the crossbar – a header by Russell Cicerone and a free kick by Kenardo Forbes just before the break.

Once again, the Hounds made multiple substitutions at the break, though some starters got a more extended run for the first time. Cicerone, Borso, midfielder/defender Dani Rovira, and defenders Jelani Peters and Robby Dambrot all got between 54 and 70 minutes, as the team begins to stretch out toward the March 12 season opener.

Dixon made the score 2-0 with a penalty kick in the 74th minute after Dane Kelly drew a hard foul in front of goal. It was the first goal of the preseason for Dixon, the Hounds’ assists leader in 2021.

Eyang wrapped up the scoring with his first goal in a Hounds uniform. The striker, who signed with the team as a free agent, turned to lose his defender at the top of the box and scored with a hard, left-footed shot that got inside the near post in the game’s final minute.