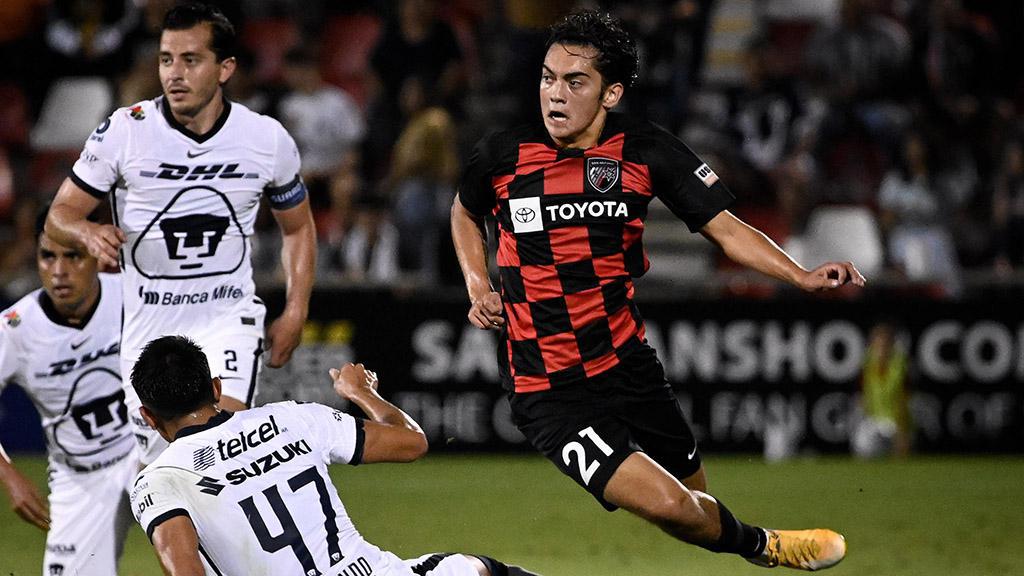 One of the youngest signings in the USL Championship's history, Leo Torres' spell on loan away from San Antonio FC last season could provide a springboard toward his future path. | Photo courtesy Darren Abate / San Antonio FC

In 2021, the influence of young players in the USL Championship continued to rise.

The three nominees for the league’s Young Player of the Year award all came from independently owned clubs. Louisville City FC’s Jonathan Gómez earned the honor prior to his selection for the U.S. Men’s National Team in December and was joined by San Antonio FC’s Jose Gallegos and El Paso Locomotive FC’s Diego Luna as finalists. All three were voted to the Championship’s All-League Team as well.

If there was a clear indicator the times were changing across the league – and beyond – they could be found in the numbers.

“The landscape in this country is continuously changing and evolving, and it’s improving, that’s the most important part,” said San Antonio FC Academy Director Nick Evans recently. “It’s improving in many aspects all the way from the competitive level from MLS to the USL Championship down into USL League One, but you’re now also starting to see lots of younger players being given more opportunities.”

For some – like Gallegos in San Antonio – the line has been almost a direct one from the club’s academy into the first team. Since signing professionally with the club before the 2020 season, the 20-year-old has added to the 14 appearances he made in 2019 as a USL Academy signing and has now made more than 60 appearances for the club in the Championship’s regular season and playoffs.

No two paths are the same, though.

The road for Gallegos’ academy graduate counterpart Leo Torres – who in 2019 became at the time the youngest signing in the Championship’s history – has been more complicated. Through the first six months of last season, the 17-year-old had made only six appearances for a total of 40 minutes of action in the league, caught between his immense promise as a player and earning minutes in a squad competing at the top of the Mountain Division for a trip to the USL Championship Playoffs. 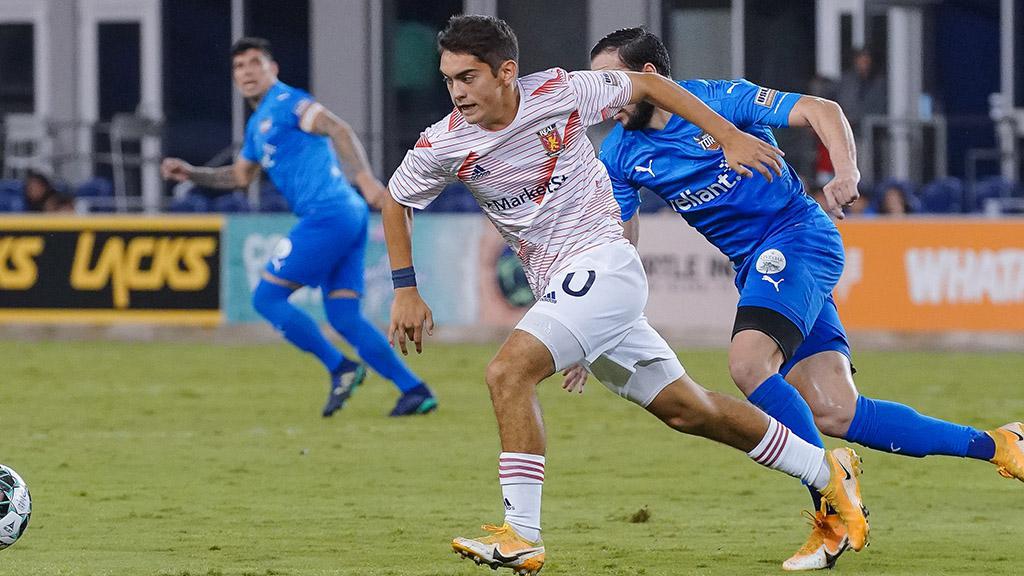 While on loan with Real Monarchs SLC in 2021 from San Antonio FC, midfielder Leo Torres made his first four starts in the Championship and recorded his first two goals in his young career. | Photo courtesy Rio Grande Valley FC

Opportunity arrived in late September, however, as Torres made the move to join Real Monarchs SLC on loan for the remainder of the season. It offered a breath of fresh air – and fresh opportunity – Torres was eager to take.

The stint on loan was a success. Torres made seven appearances for the Monarchs, including his first four starts in the Championship, and notched his first two goals in a 4-3 victory against Austin Bold FC on Oct. 16. He recorded 327 minutes of action, approximately six times the number he had recorded previously in the league for SAFC.

For Evans, finding a way for Torres to compete in the Championship – even if it was away from San Antonio for a spell – was key to unlocking his individual pathway.

“There’s that element which is based on the individual, and what the individual needs. What does he need right now in this moment?” said Evans. “For some of our players, they need to be with us in San Antonio, competing and learning their trade in our environment every day. Leo came to a point where he needed to go out, and the right club was found at the right time for him to do that. We’re incredibly appreciative of Real Monarchs and Salt Lake for allowing him to do that.”

The time Torres spent in Utah should help provide a bridge toward his current goal of becoming a regular in San Antonio’s lineup, and then further up the ranks as his career progresses. Not only did he get the chance at regular minutes with the Monarchs, but the time on loan – and away from home for the first time – also offered a chance to expand his horizons as a professional.

“I’ve learned a lot this year about taking care of your body,” said Torres. “Your body is your thing, it’s your job, so you’ve got to take care of it because anything can happen in a split second. That’s what I learned this year, every morning, getting there first – stretching, stretching, stretching.”

Torres isn’t the only young prospect on the horizon in San Antonio. The past season saw Fabrizio Bernal make his Championship debut as a USL Academy signing before joining the program at Xavier University and making 14 appearances as a freshman this fall. Others like Rocky Perez, Brad Dildy, Roman Holt and Abraham Lincon remain in the pipeline, all current USL Academy signings that also competed alongside Torres at the 2021 USL Academy Playoffs this past December. 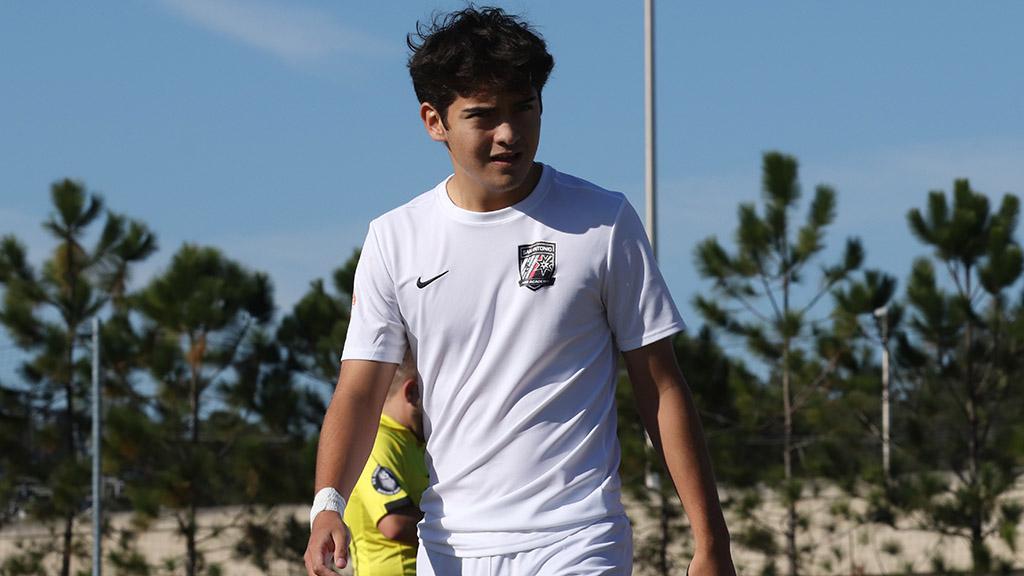 San Antonio FC midfielder Leo Torres competed this past December at the USL Academy Playoffs alongside others aiming to break into the club's Championship lineup in the future. | Photo courtesy Clay Benjamin / United Soccer Leagues

Where each of their paths – and those for numerous players looking to make their breakthrough at clubs across the Championship – will take them this year is to be determined. For Torres, who turns 18 this month, the upcoming year may be important as he looks for his SAFC breakthrough.

“I mean, it’s a big development hitting 18,” said Torres. “Of course, it all depends on me to put in the work and to have the mentality of always wanting to win. I always want to win, everyone does, and I just want to show that I want it more than everyone else on the field.”

For Torres and the rest of the young talent now beginning to bloom at clubs in the Championship and League One, though, the opportunity seems certain to be there should they grasp it.

“The most important thing is now kids can see these opportunities there for them,” said Evans. “At our club, other clubs are doing great things within the Championship, within League One, and within MLS as well. As long as your club is responsible for your ecosystem in your city and is doing it right, I think most kids have a fair enough chance these days.”