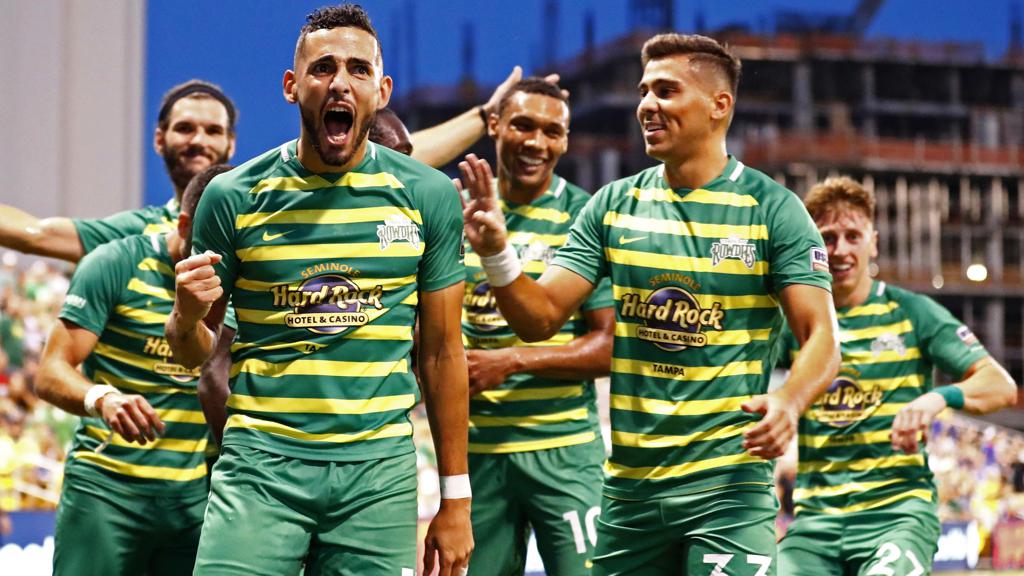 ST. PETERSBURG, Fla. – The Tampa Bay Rowdies announced on Thursday it had re-signed five players including 2021 USL Championship All-League selection Aaron Guillen and veteran midfielder Leo Fernandes ahead of the 2022 USL Championship season. Also set to return to the club are midfielders Laurence Wyke and Lewis Hilton, and forward Juan Tejada. The transactions are pending league and federation approval.

“We’ve worked as hard to bring these guys back as we have to make any new signings that we’re making,” said Rowdies Head Coach Neill Collins. “We said this time last year, that continuity is just so key to what we want to keep achieving. These are the guys that have put us in the positions we’ve been in, so we’re keen to bring them back and keep building on that.”

Guillen returns for his third season in Tampa Bay after a standout campaign that saw him play a key role in the club’s league-best defensive unit. The 28-year-old made 35 appearances across the regular season and playoffs as the Rowdies posted a league-best 16 clean sheets, including a record-setting 891-minute streak without allowing a goal during the middle of the regular season. Guillen’s performance in 2021 earned him a spot on the USL Championship’s All-League Second Team.

Fernandes returns as the longest-tenured current member of the Rowdies’ squad, having been with the club since it joined the USL Championship in 2017. This past season, Fernandes surpassed 100 appearances for the Green and Gold, and has now made 119 appearances overall for the club, placing him fifth in the club’s modern era. The veteran creative midfielder was as reliably productive as ever in 2021, bagging nine goals and five assists. With 21 total assists in his time with the Rowdies, Fernandes also now ranks second all-time in assists for the club.

Hilton will also return for his third season in Tampa Bay, having this past season established himself as a fixture in the starting lineup. The 28-year-old started in 34 out of 36 matches for the Rowdies in 2020 and recorded five assists while also notching a pair of goals and a career-high 76 key passes. The English-born midfielder has now recorded 170 appearances in the Championship’s regular season in his career, recording 16 goals and 23 assists and more than 12,000 minutes of action.

“Lewis and Leo have just had fantastic seasons, and Aaron as well,” said Collins. “The three of those guys have been so consistent, and I think consistency can’t be overrated, because that’s what gets you through those tough summer months. These are the guys that constantly produce.”

Tejada returns for his fourth season for the Rowdies after providing key contributions after injury impeded his return to action early in the 2021 campaign. The Panamanian international had previously tallied 12 goals in his first two seasons for the Rowdies, and Collins believes he has yet to reach his ceiling.

“We all know what Juan is capable of,” said Collins. “Hopefully he can get a little bit of a break and stay fit. He showed last year when he started what a tremendous job he can do for the team. We all believe he’s got even more to offer.”

Wyke, meanwhile, will return for his second campaign after signing with the club last preseason. The 25-year-old gained the confidence of the coaching staff to become a regular starter in the center of the field next to Hilton, breaking up opposing attacks and feeding into Tampa Bay’s own attack, recording 35 interceptions and 49 tackles while contributing six assists and 26 key passes in the attacking third.

“I enjoy watching Laurence play, just the energy he plays with,” said Collins. “I think playing in midfield last year, he made it look as if he’d played there for a long time, but he hasn’t. So, I suspect we can see him even more improved next year having had a year under his belt and a year in this environment. I expect to see him score more goals because he was very unfortunate in certain circumstances not to get more. I see in training how good he is, so I think we can see more goals from him as well.”