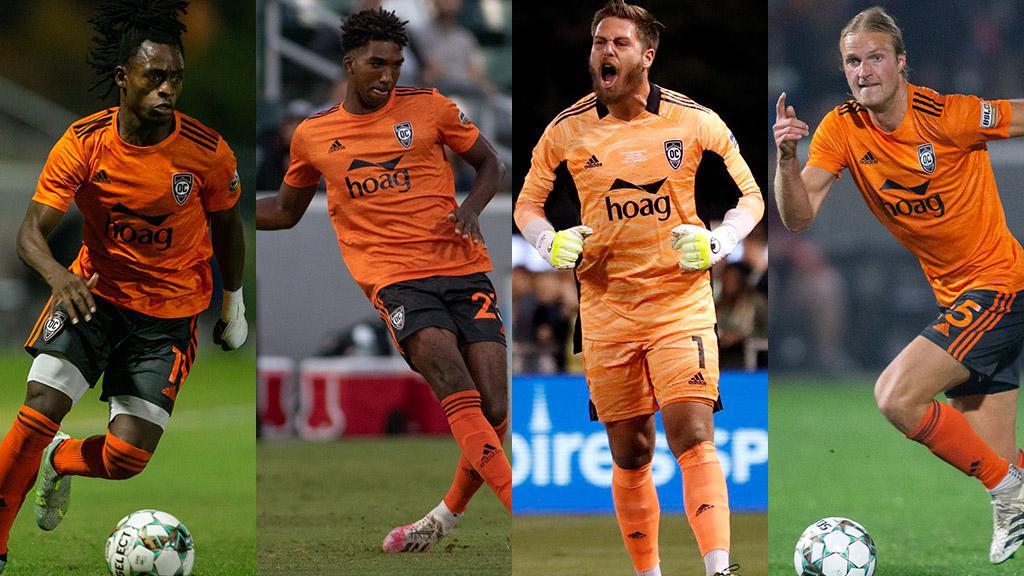 Ronaldo Damus, Kobi Henry, Patrick Rakovsky and Mikko Kuningas (L to R) are all set to return to Orange County SC as the club defends its USL Championship title in the 2022 season.

Damus returns having earned MVP honors as Orange County claimed the 2021 USL Championship Final against the Tampa Bay Rowdies in November, recording a pair of goals in the 3-1 victory at Al Lang Stadium. The Haiti international led OCSC with 18 goals in the regular season and playoffs while also representing his country at the 2021 Concacaf Gold Cup, including four of the side’s five goals during its run to postseason success.

Rakovsky also delivered in the postseason for Orange County as he posted a pair of shutouts and made a crucial first-half penalty kick save against the Rowdies in the Championship Final after earning the No. 1 role between the sticks midway through the season. The German goalkeeper recorded 82 saves across the regular season and playoffs and a 75.9 percent save percentage, 0.92 goals-against average and 11 shutouts after joining OCSC prior to the season.

Kuningas made 33 appearances for Orange County across the regular season and playoffs and recorded four goals, four assists and 35 chances created during the campaign – second-most on the team – while logging a little more than 2,000 minutes of action overall. The 24-year-old Finn scored the third goal for OCSC in its victory against Tampa Bay on a standout free kick and provided balance to the side’s attack on the left side.

Henry made 19 appearances and recorded 22 interceptions, 60 clearances and 15 blocked shots in a breakout season on Orange County’s back line. The 17-year-old appeared regularly throughout the campaign and recently was called into the U.S. Men’s National Team for its upcoming exhibition against Bosnia and Herzegovina on December 18. Henry’s selection alongside Louisville City FC’s Jonathan Gomez saw them become the first two current USL Championship players named to a U.S. Men’s National Team camp in league history.