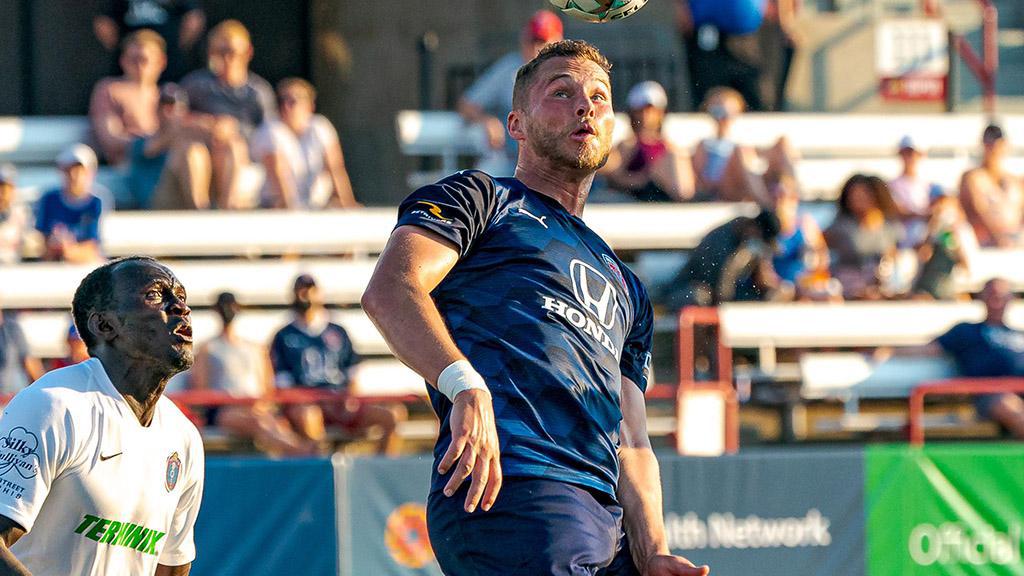 Indy Eleven center back A.J. Cochran recorded 21 appearances for the side in the 2021 Championship season, and is set to return for his second campaign next spring. | Photo courtesy Matt Schlotzhauer / Indy Eleven

INDIANAPOLIS – Indy Eleven announced on Friday the club had re-signed defender A.J. Cochran while also adding Grenada National Team defender Alex McQueen and former Real Monarchs SLC forward Aris Briggs ahead of the 2022 USL Championship season. The trio of signings are pending league and federation approval, and per club policy contract terms will not be made public.

“A.J. Cochran knows what it takes to succeed in the USL Championship and brings more continuity back to our defensive corps, so I’m thrilled to have his services again here in Indianapolis for next season,” said Indy Head Coach Mark Lowry. “Alex McQueen is a dynamic player who brings valuable club and international experience as well as versatility, while Aris Briggs showed glimpses that he can perform as a skilled target forward in our league last season. These players are ready to buy in to our culture of competing day in and day out, and I look forward to working with them all in 2022.”

Cochran returns to the Circle City after starting 18 of 21 appearances in 2021 – numbers that could have been higher if not for a concussion suffered in early September. Despite the missed time, the Saint Louis native and University of Wisconsin product was one of the squad’s most productive backline members with 19 blocks (T-1st on the team), 69 clearances (2nd), and 35 interceptions (3rd, one behind team lead). The 28-year-old has made 135 regular season appearances in the Championship and has logged 11,715 minutes of action, and in 2019 at Phoenix Rising FC helped the side claim the best record in the league during the regular season.

McQueen will come stateside after notching seven goals and 11 assists in 92 appearances in the English National League across the last four seasons between Dagenham & Redbridge F.C. (2018-20) and Barnet F.C (2020-21). Prior to that, the Tottenham Hotspur Academy and U-21 side performer made his professional debut at EFL League Two side Carlisle United from 2015-17 and bridged his English stints with a half-season at Finnish side VPS in 2018. The versatile 26-year-old has also made 11 appearances for the Grenada Men’s National Team since his senior debut in November 2017, including all three of the Spice Boys’ Group Stage outings in the 2021 CONCACAF Gold Cup and two of the country’s four 2022 FIFA World Cup qualifying matches during the first half of 2021.

Briggs comes to Indiana’s Team from Real Monarchs SLC, where he bagged three goals and added two assists in 19 appearances this past season. The 25-year-old striker did all his damage on the scoresheet during a torrid month-long stretch last summer, scoring in three straight matches and assisting in two consecutive games across a six-game run. A former MLS SuperDraft selection by Real Salt Lake last January, Briggs was a standout at Georgia State University, where he tallied 27 goals in 53 appearances, leading to consecutive nods as the Sun Belt Conference’s Offensive Player of the Year in 2019 and 2020.