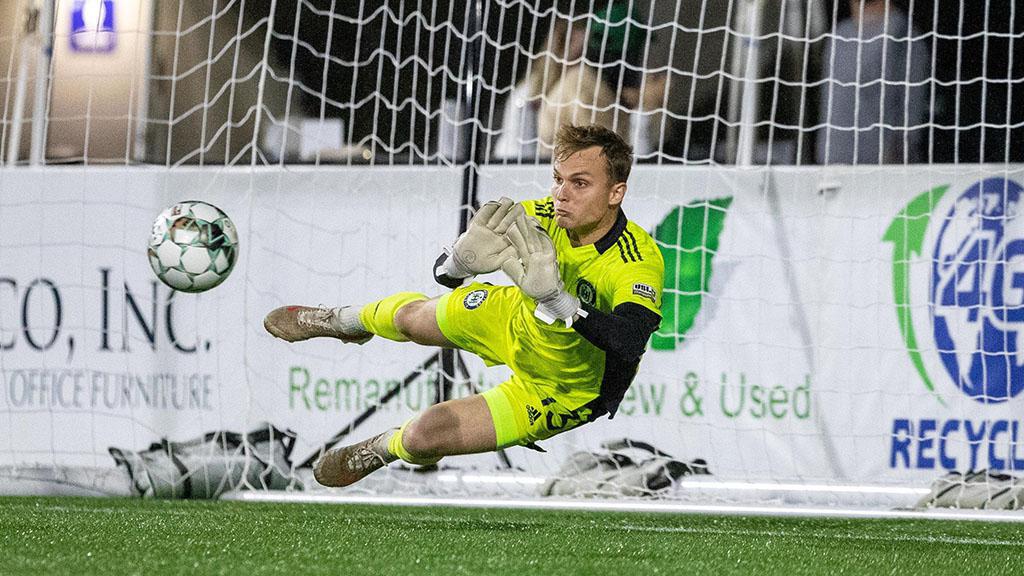 Jeff Caldwell was nominated for the USL Championship's Goalkeeper of the Year award in 2021 after a season in which he set a league record with five penalty kick saves in the campaign. | Photo courtesy Hartford Athletic

Caldwell joins Colorado Springs after a standout season at Hartford Athletic in the 2021 USL Championship season. The 25-year-old was nominated for the Championship’s Goalkeeper of the Year award as he recorded 108 saves – second-most in the league – and nine shutouts in 30 regular season appearances. Caldwell set a Championship single season record with five penalty kick saves on nine attempts, and posted a 71.5 percent save percentage overall.

“I am very pleased to be joining a talented group and exciting project here in Colorado Springs," said Caldwell. “As an opposition player I tasted the atmosphere the fans bring to Weidner Field and I cannot think of a better venue to now call home. I’m grateful to Coach Burke and the football club for giving me an opportunity to chase trophies with them and cannot wait to get started. My city, my team.”

Caldwell was the 19th overall selection in the 2018 Major League Soccer SuperDraft, and was signed by New York City FC. The goalkeeper spent the 2019 season on loan to Memphis 901 FC in the USL Championship before joining the New England Revolution prior to the 2020 Major League Soccer season.

Prior to his professional career, Caldwell played in one game with the United States Under-20 Men's National Team in 2015, and also featured for the U-17 and U-18 national teams. He was a member of the United States’ 2013 Concacaf U-17 Championship squad and was also named to roster for the 2015 FIFA U-20 World Cup. Collegiately, Caldwell was a standout at the University of Virginia, where he was named to the All-Atlantic Coast Conference Team on three occasions.

“Jeff is the first building block of the spine of what I intend to be a highly competitive roster in the West," said Switchbacks Head Coach Brendan Burke. “He is young and talented but also experienced at this level and a leader and I’m sure that he will be embraced by his teammates, our staff and our big growing fan base.”