Former teammates, adversaries in playing days have maintained bond since moves to the U.S. in 2016 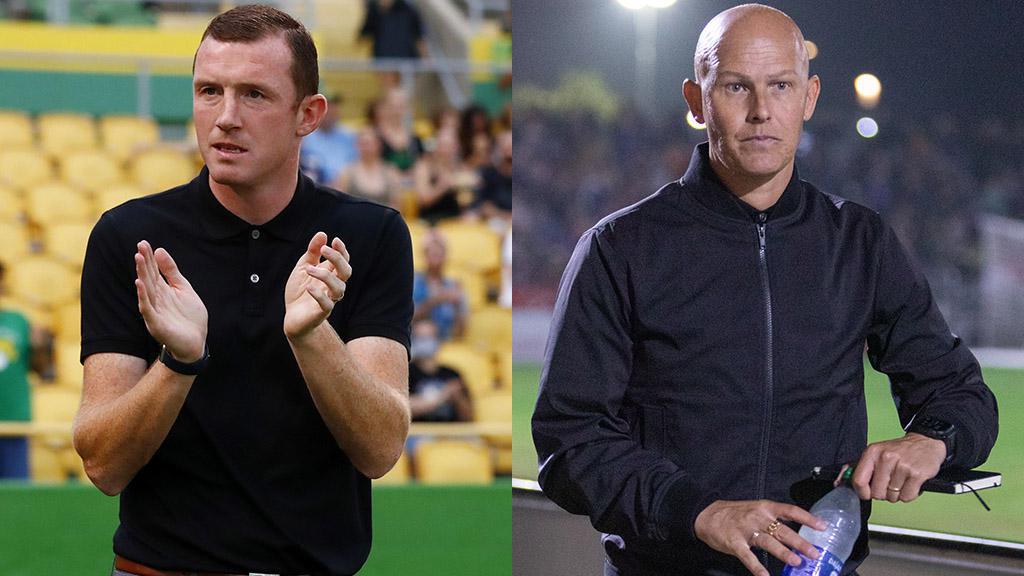 Having arrived the United States for the final stops of their playing careers in 2016, former teammates Neill Collins of the Tampa Bay Rowdies and Richard Chaplow of Orange County SC will lead their clubs into Sunday's 2021 USL Championship Final.

ST. PETERSBURG, Fla. – A little over five years ago, as Richard Chaplow prepared to move an ocean and continent away from his native England to continue his professional soccer career in the USL Championship at Orange County SC, gaining insight as to what he should expect as he and his family arrived in the United States was a priority.

Thankfully for Chaplow, he knew just the person to call.

A few months prior, Neill Collins – whom Chaplow had briefly played with at Preston North End in addition to meeting as opponents elsewhere during their careers – had made the same move as he joined the Tampa Bay Rowdies ahead of the 2016 season.

“For me, coming over to the U.S., you naturally reach out to people you already know,” said Chaplow this week. “To be able to have phone conversations with Neill and others before coming over, simple things like, ‘how’s the family settled, how have the kids found the school system,’ things like that were beneficial.”

On Sunday night, Chaplow’s Orange County side and Collins’ Rowdies will square off in the 2021 USL Championship Final, bringing together the two former players and now Head Coaches at their respective clubs in competition for the first time since their moves to the U.S.

It’s an opportunity both are looking forward to, with each having stayed in regular contact over the years as their paths in the game and friendship beyond the field has continued.

“Throughout the years, we’ve been competing here in the USL, we’ve stayed in touch, we’ve supported each other, first as players and then as coaches,” said Chaplow. “I’ve texted him and he’s texted me before and after the playoff games this year just to wish each other luck, say hopefully we see you in the Final, and luckily for both of us it’s worked out that way.”

If there’s a thing to know about Neill Collins, it’s that he coaches now the same way he played.

“I think competitor is a word for him, fiercely competitive in everything he does,” said Chaplow. “We know that his team has those values as well.”

The two first got to know each other properly during the 2009-10 EFL Championship season as Collins arrived on loan from Wolverhampton Wanderers, where the two became friends. Collins made 21 appearances for Preston that season, including 19 starts, and notched one goal, while Chaplow made 31 appearances and had two goals and three assists for the Lilywhites. 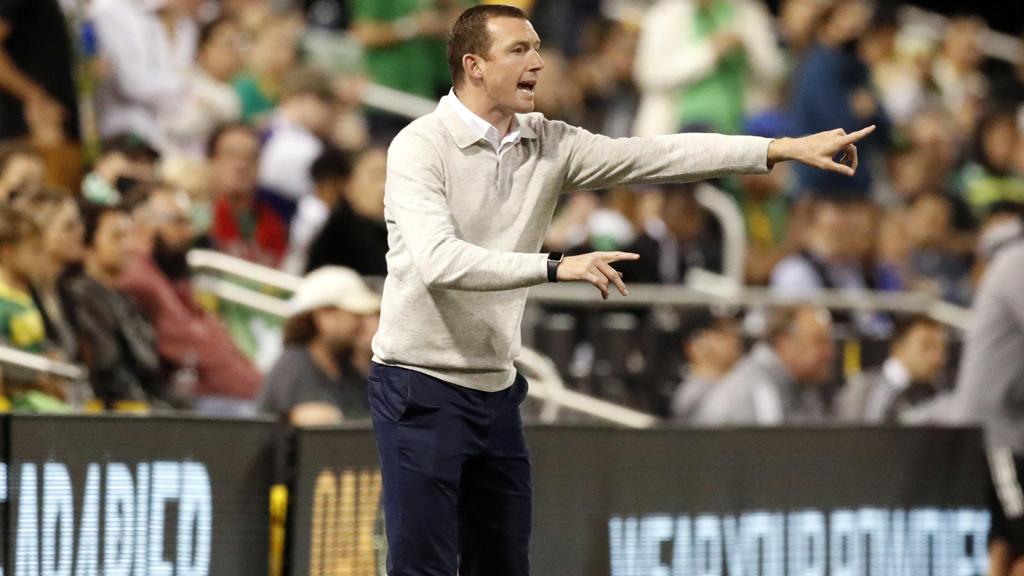 The competitiveness Neill Collins showed as a player has remained since he was appointed as Head Coach of the Tampa Bay Rowdies midway through the 2018 season. | Photo courtesy Matt May / Tampa Bay Rowdies

“I wasn’t teammates with him for long, I think it was seven or eight months, because I wasn’t very good that season,” Collins joked this week, “but what a funny guy. Great teammate, me and Richard were close in a good group of teammates at that time.

“As a player, he was full of energy, full of quality, the type of midfielder I’d like to have in our team. Kinda close to like a Lewis Hilton, but who could get you running forward. A really good player and always a threat in terms of scoring a goal or two.”

The pair had previously squared off while Collins was at Wolves and Chaplow at West Bromwich Albion in the Black Country derby and did so again as Collins moved to Sheffield United and Chaplow to Burnley later in their careers. After their moves to the United States, though, and the potential for what lay ahead of them at the end of their playing days drew near, the two became sounding boards for each other from opposite ends of the country.

While Collins always saw himself on the sidelines in the future, the evolution of Chaplow from a talented playmaker to someone who was now aiming to bring the best out of his players and lead Orange County to success has been an interesting one for the Rowdies Head Coach.

Both midseason appointments – Collins taking over from former Rowdies Head Coach Stuart Campell in 2018 and Chaplow from Braeden Cloutier this past August – the experiences they’ve shared has been one both have been able to learn from as well.

“I can see over that time his aspirations to coach have really grown, and he’s really become engrossed in becoming a top coach,” said Collins. “I’ve had some great conversations with him over the past couple of years about his experiences, my experiences, we’ve shared information about the league. It’s just great to have the chance to play against each other in such a big game, and just hearing him speak about it, how passionate he is about it, you can tell he’s in the right job and Orange County have done well to get someone of his quality and someone of his hunger, which I think is important.”

With Collins aged 38 years old, and Chaplow two years younger, both are part of a younger vanguard of coaches currently coming to the fore in the Championship. Of the four coaches to reach the Eastern and Western Conference Finals this season, three were under the age of 40, including 31-year-old Danny Cruz at Louisville City FC. So were all three of the nominees for the Championship’s Coach of the Year award in Collins, Mark Lowry – recently appointed as the new Head Coach at Indy Eleven – and Colorado Springs Switchbacks FC’s Brendan Burke.

Overall, nine of the 16 Head Coaches to lead their sides to the 2021 USL Championship Playoffs were aged 40 or under, a sign of the changes and opportunities the league is now offering young coaches as they take high-profile professional jobs on the sideline.

“I think the league is a competitive league, an exciting league and one that’s growing quickly,” said Chaplow. “It’s given opportunity to people who are coming over to the U.S. and have the credentials to take those positions, and I think it’s maybe a move across the soccer world right now. You’re seeing a lot more young, exciting coaches coming into the game. That can only be good for the game because it’s a new-school way of thinking, it’s mixed on some occasions with an old-school attitude, and that’s important.

“Everything needs to evolve, everything needs to move forward, and we’re lucky enough to be getting those opportunities at maybe a younger age than some others have been. Hopefully we can do our organizations and our families and our players proud and that’s what we’re looking to try to do day-in and day-out.” 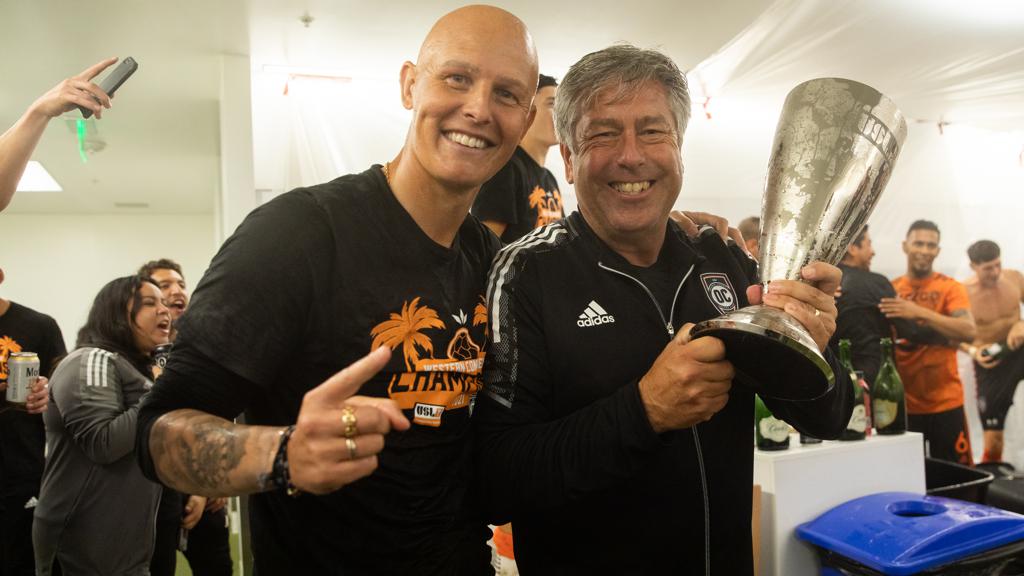 After a midseason appointment as Orange County SC Head Coach, Richard Chaplow has led the side he once captained to its first USL Championship Final in its history on Sunday night. | Photo courtesy Liza Rosales / Orange County SC

For Collins, the contrast on the sidelines now visible in the Championship is mirroring that on the field, where in a similar manner that some of the league’s top young players can measure up to high-level talent in its prime, coaches like himself and Chaplow are getting the chance to match their wits with veterans such as Pittsburgh Riverhounds SC’s Bob Lilley, the Charlotte Independence’s Mike Jeffries and former Charleston Battery Head Coach Mike Anhaeuser.

“It’s a real league for people that are hungry to start their career and prove themselves, and it’s the same for coaches,” said Collins. “I honestly think not just young coaches but coaches like Bob Lilley and Mike Anhaeuser who I have had to coach against – so good, so clever, so astute - it’s no different from the young players having to come up against someone of [Rowdies defender] Forrest [Lasso]’s caliber. This league’s got quality running right through it and it’s improving all the time. I know there’s a lot of coaches that would love to have this opportunity, so we’re all appreciative of it and don’t take it for granted.”

The stresses and strains of the job certainly aren’t to be trifled with, though, no matter how old you are.

“If we keep going to penalty kicks, I don’t know if I’ll feel under 40 much longer,” said Chaplow with a laugh. “They’re taking away years from my life, for sure.”

As big as Sunday’s game will be for both clubs, the reunion between Chaplow and Collins will add another dimension to the contest. As their first chance to see each other in person for a while, brought about through the circumstances of the past 18 months, the two are eager to see each other again.

“I haven’t seen Neill in person for some time,” Chaplow said. “So, it will be nice to see him and shake his hand again.”

After guiding their sides this far, the 90 minutes – or maybe more – that lie ahead at Al Lang Stadium is one both are relishing being part of.

“I think Orange County the last two or three months have been a very difficult team to beat,” said Collins. “I think like ourselves, they’re a very good team. By that I mean they play together as a team, they don’t just rely on one individual, they’re a collective, well-coached team, so we’ll need to make sure that we’re prepared for all their threats, but particularly the fact that they’re a very well-organized unit.” 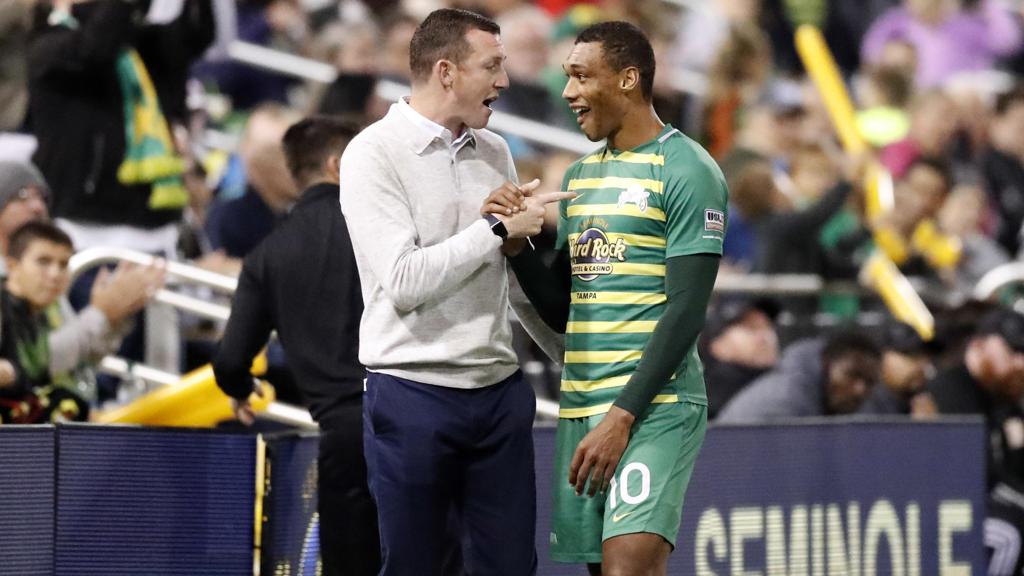 “Both of us have come from some adverse situations in the playoffs,” added Chaplow, “They’re not an easy thing to progress through, but we’re delighted that we’re going out there to represent the West as the best team in our conference.”

“Yeah, I’ll have to make that deal with him,” said Chaplow, smiling. “Maybe we can get that going.”