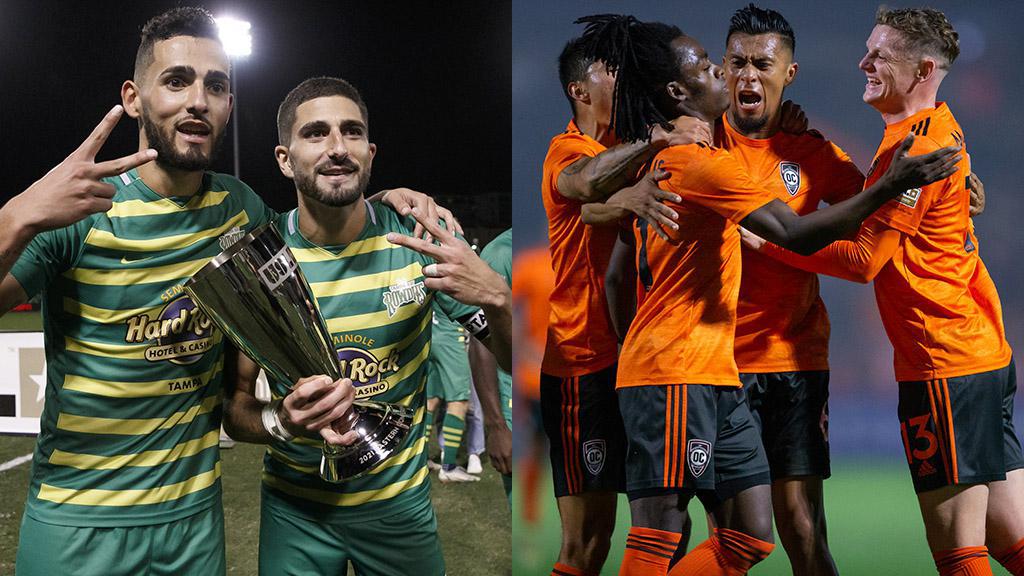 The Tampa Bay Rowdies and Orange County SC will square off for the first time in the 2021 USL Championship Final as both clubs look to claim their first Championship title at Al Lang Stadium.

ST. PETERSBURG, Fla. – The Tampa Bay Rowdies will play host to Orange County SC in the 2021 USL Championship Final on Sunday night with a new league champion set to be crowned at Al Lang Stadium in the finale to the 2021 campaign. The game will air live on ESPN, ESPN Deportes and SiriusXM FC at 8:30 p.m. ET.

Tampa Bay enters after claiming its second consecutive Eastern Conference title last Saturday night following a thrilling 3-2 victory against Louisville City FC in front of a sellout crowd of 7,210 fans at Al Lang Stadium. The Rowdies’ rallied after falling into a two-goal deficit in the first half behind late substitute Lucky Mkosana, who scored twice – including in the sixth minute of stoppage time – to send the game to extra time. Steevan Dos Santos notched the seventh postseason goal of his career in the 102nd minute to send the hosts to victory and the Championship Final.

Mkosana has now recorded six goals in the postseason all-time, with all five of his playoff goals for the Rowdies having come as a substitute over the past two seasons. Dos Santos, meanwhile, has now recorded an individual single-season high with 12 goals this campaign across the regular season and playoffs, sitting second on the club behind captain Sebastian Guenzatti with 22 goals this season. Guenzatti was one of four Rowdies’ players honored this week, earning selection to the Championship’s All-League First Team alongside goalkeeper Evan Louro and defender Forrest Lasso – who individually set a league record with his fifth consecutive All-League First Team selection – while defender Aaron Guillen was voted to the All-League Second Team.

Louro, Lasso and Guillen have made up three-quarters of what has been a standout Rowdies defense, with Jordan Scarlett having also been almost ever-present since the quartet came together prior to the 2020 season. The Jamaican defender was absent from last Saturday’s game, however, as was Conner Antley with both remaining as injury concerns this week. The Rowdies are undefeated in their past 11 home games, however, while home sides have claimed eight out of nine prior Championship Finals, a good omen for the side as it looks to claim its first league title since 2012.

Orange County’s path to the final has also been powered by a standout defensive unit, with the club having conceded only twice in the past eight games to reach the Championship Final for the first time in its 11-season history. OCSC advanced to the Final after claiming the Western Conference title last Saturday night with a 5-3 victory in a penalty shootout against San Antonio FC before a sellout crowd of 5,386 fans at Championship Soccer Stadium. Sean Okoli scored the decisive goal to open the fifth round as Orange County advanced by way of a shootout for the second consecutive round.

OCSC’s defensive success has been keyed by center backs Michael Orozco and Rob Kiernan, with former United States Men’s National Team player Orozco leading the team with more than 3,200 minutes of action this season having started every game of the campaign. Kiernan has also been a standout in the center of defense, with the experience of Kevin Alston, Brent Richards and Nathan Smith also present at full back. The club has been backed by goalkeeper Patrick Rakovsky, who over the club’s past eight games has recorded 25 saves and a 92.6 save percentage, while also coming up with a key save in the side’s penalty shootout win against Oakland Roots SC in the Western Conference Semifinals.

The club’s drive to the postseason came also partly due to a mid-season coaching change which saw former club captain and assistant coach Richard Chaplow take the reins from former Head Coach Braeden Cloutier in mid-August with the side holding a record of 7-7-5 in the Pacific Division. Under Chaplow’s leadership OCSC has gone 9-4-4 including the postseason, with Haiti international Ronaldo Damus leading the way in attack. Damus has recorded 16 goals this campaign, including both of the club’s goals this postseason, as he looks to add to a USL League One title with North Texas SC in 2019 with a Championship Final victory this Sunday.