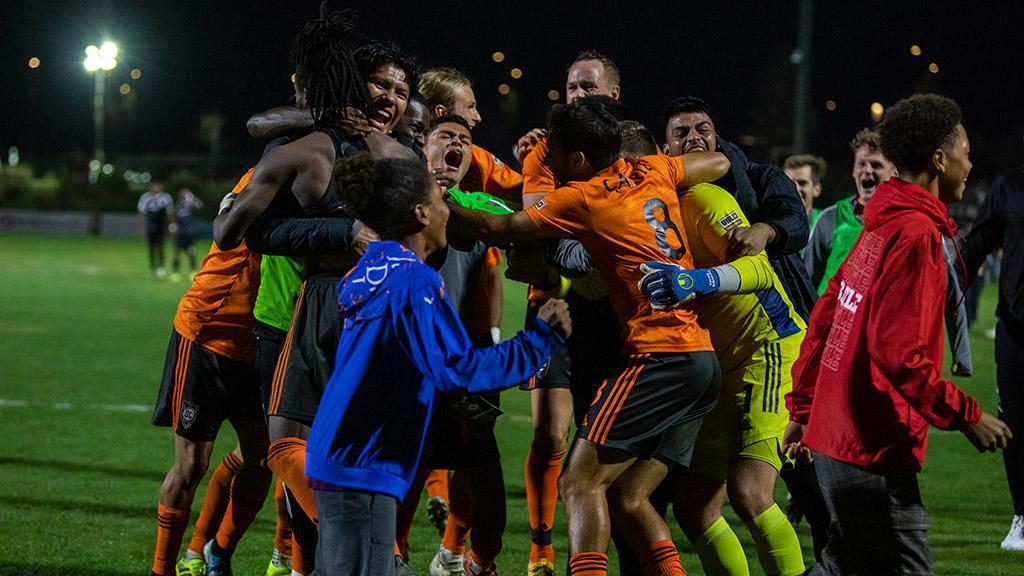 Orange County SC celebrated its second trip to the Western Conference Final of the USL Championship Playoffs last weekend, and the side is hoping to recapture that emotion Saturday against San Antonio FC. | Photo courtesy Liza Rosales / Orange County SC

IRVINE, Calif. – The focus for Orange County SC over the past week has been on San Antonio FC and Saturday’s meeting at Championship Soccer Stadium in the Western Conference Final of the 2021 USL Championship Playoffs, presented by TwinSpires.

For a moment in those preparations, though, there was one final opportunity to look back at the emotion and feeling the side’s penalty shootout success against Oakland Roots SC last weekend produced.

“We were watching the penalty kicks [from the last match] back this morning with the group after at the end of our analysis session,” Orange County SC Head Coach Richard Chaplow told Angels on Parade’s Alicia Rodriguez. “And the guys celebrating after they’ve scored, [goalkeeper] Patrick [Rakovsky] celebrates after he saves it, everybody running on the field and celebrate and as a team with the fans, and that’s why we started playing.”

It’s that emotion Chaplow is hoping his side gets to experience at least once more this year as it hosts the Western Conference Final for a second time in club history. Three years ago, he experienced the other side of the coin as the club’s captain in a 2-1 defeat to Phoenix Rising FC that sent the side led by Didier Drogba and Solomon Asante into the Championship Final.

With the opportunity for Orange County to make its first trip to the final game of the season at hand, Chaplow is hoping his side takes in everything it has to offer.

“I think obviously, we can all get caught up in the emotions of the event and what it is and what’s at stake, but I always feel that you’ve got to enjoy these moments,” he said.

The challenge facing Orange County could be familiar to the experience of facing Phoenix. San Antonio is making its first visit to the Western Conference Final – as Rising FC was in 2018 – after a 3-1 win against Rio Grande Valley FC last Saturday night at Toyota Field and is led by a marauding, direct attack. SAFC’s front line been boosted by the return of Santiago Patino, who has three goals in two games this postseason. The Brazilian is averaging a goal every 112.4 minutes with eight tallies in 13 games in a season that was interrupted by injury, adding another threat to those already offered by fellow forward Nathan Fogaca and attacking midfielders Jose Gallegos and Marcus Epps. 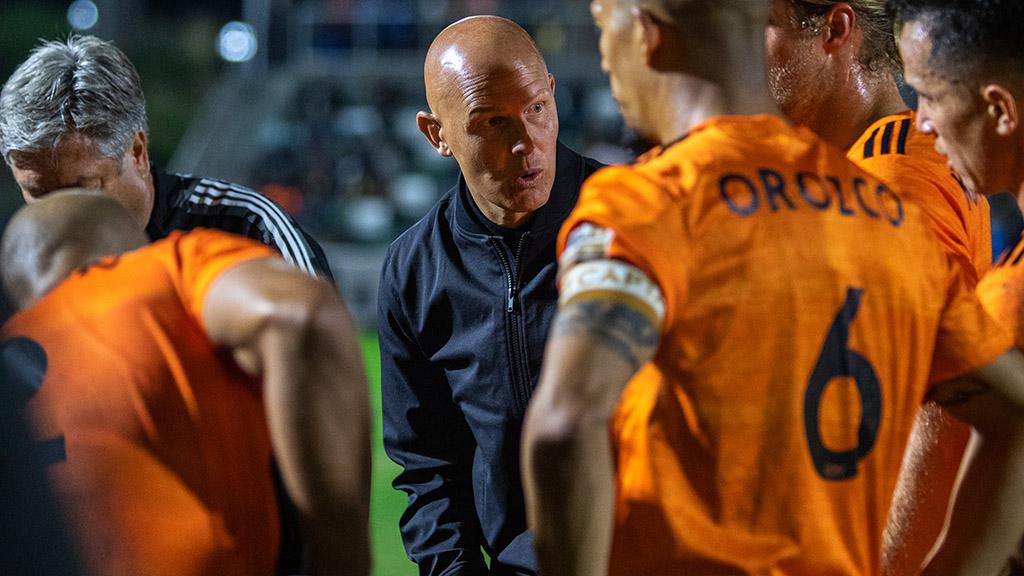 Orange County SC Head Coach Richard Chaplow led his side into the 2018 Western Conference Final as club captain, and is now hoping the team can take the next step to the first Championship Final. | Photo courtesy Liza Rosales / Orange County SC

Facing that is an Orange County defense that earned shutouts in its first two games of the playoffs, and that has only conceded once in its past seven games overall as it closed the regular season with five consecutive wins. Center backs Rob Kiernan and Kobi Henry are set to be available for selection again after Kiernan served a one-game suspension against Oakland and Henry was on international duty with the United States U-20 Men’s National Team in Mexico, giving Chaplow a reinforced back line to potentially call on after Kevin Alston filled in alongside former United States international Michael Orozco last week.

As well as San Antonio’s attack has been performing, that foundation could prove key to Orange County’s chances of success.

“It makes us stronger,” Chaplow told Rodriguez. “Obviously, we went into the weekend with only one available center back in Michael Orozco. Credit to the guys that were called upon to play out of position. And we patched it up a little bit, but I thought every single guy was outstanding in that backline. Obviously not conceding another goal in 120 minutes, 125 minutes probably with added time, is a testament to the work that these boys are putting in on the training field.”

After coming out on the short end three years ago alongside Alston and forward Thomas Enevoldsen, Chaplow is now hoping his side can produce a performance worthy of the stage they’re on.

“Enjoy it,” he said. “Go out there, you know what’s at stake, but give it your best. No regrets, and let’s see where it takes us.”